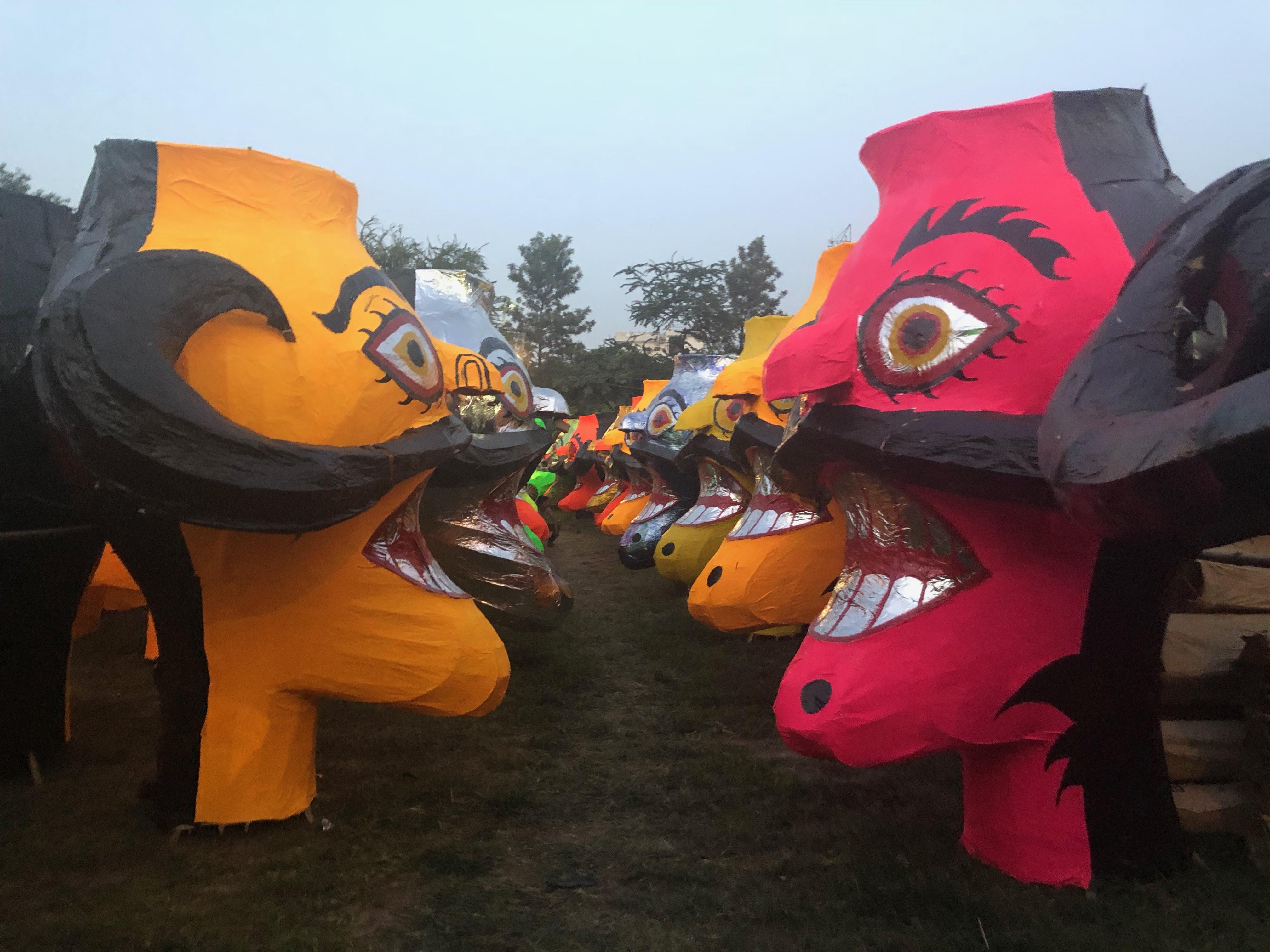 Rows of Raavan heads at Subhash Nagar Park, New Delhi, which was allotted to the craftspeople this year. It has adversely affected their business
Image: Smita Tripathi
Smita Tripathi   |   Published 17.10.18, 07:18 AM

'The large effigies have six major sections -- the crown, the face, the torso, the skirt, the feet and the footwear,' explains Ramit Mitra, co-founder of Delhi By Foot, a company that organises cultural and heritage walks across Delhi. Mitra has been doing a Raavanwala walk around Titarpur for the past few years and knows most of the artistes. 'On Vijayadashmi, these parts are transported separately and then assembled at the Dussehra site. The torso and the skirt make up the largest part of the effigy and usually have the highest concentration of crackers,' says Mitra. However, the crackers or aatishbaazi are not fitted into the effigy by the Raavanwalas. 'There are specialists for that,' says Mitra.

So what attracts a prospective customer to a Raavan? 'It's the moustache,' says Subhash. 'A Raavan is bought for his moustache. Kumbhkaran and Meghnath have smaller moustaches,' he adds. Last year they were long. This year, they are twirled and curly.

During these months, migrant labour from Uttar Pradesh, Haryana and Bihar populate Titarpur to help with the process. 'I have taught the craft to several of these families over the years. Now they have set up their own businesses,' rues Rao. He adds that competition has increased and demand is falling.

Titarpur is near the Tagore Garden metro station and while until last year you could see Raavan heads, torsos, legs lying everywhere from the roadside to dividers to outside the metro station, this year the government has allotted a space, a park in Subhash Nagar, to the Raavanwalas and they have to, by law, restrict their work to this park.

The Raavanwalas are not happy about this. Subhash says, 'The space there is restricted. We could have executed more orders but we don't have the space.' Mahender adds, 'We have had to pay Rs 1.50 per feet to the MCD but there is no electricity in the park and we cannot work at night.' The street lights near the metro station provided enough light for them. The other disadvantage is that there is no cover and a lot of work got destroyed when it rained a week ago. Until last year, they could keep most of the effigies under the metro line, protecting it from the harsh sun and rain.

Subhash says that pollution has also affected demand in Delhi. He has received 15 orders this year compared to 23 last year. With a couple of more days to go, he hopes nothing will be left unsold. Mahendra has sold 20 effigies this year and still has eight large ones left. He is hoping to sell them over the next two days. 'The market rate is Rs 500 per feet but we sell it for Rs 400 per feet, sometimes even lower to make a sale,' says Rao. A 40-feet high effigy is sold for around Rs 15,000 while a 50-feet version is sold for Rs 20,000. Smaller ones, the kind you would take home are priced between Rs 1,500 to Rs 2,000. The good news is that there is now demand not only from Delhi but also from cities in Haryana, Rajasthan and Uttar Pradesh.

Mahendra says he learnt the art from Raavan Baba. The story goes that a man called Chuttan Lal Sahni from Sikenderabad, near Ghaziabad, settled in Titarpur in the mid-seventies. He started making Raavan effigies and taught the craft to other villagers. The villagers speak affectionately of Raavan Baba even though very few of those who learnt the skill from him are still around.

To begin with, bamboo is torn into thin strips and bent to prepare the frame on which the effigy will be hung. The frame is then covered with old saris and subsequently pasted with brown paper. This is then painted and decorated with coloured paper. Making the head is the most difficult part. Painting the menacing eyes, the big teeth and mouth require finesse. Some Raavanwalas have one or two people in their teams who only undertake the painting.

Come Dussehra, and the country resounds with stories of Lord Rama’s victory over the demon king Raavan. Ramleela grounds across the Hindi-speaking states enact this triumph. There are some, however, who cannot bear to watch the ritual– the Raavanwalas, who make Raavan effigies. For residents of the small urban village called Titarpur, in west Delhi, Raavan is the hero.

The village has been known for its Raavanwalas for several decades and is probably the largest effigy market in Asia. Here evil is custom-made, in all shapes, colours and sizes. From a 5-feet high effigy that can be burnt in a garden to those at 45-50 feet, of Raavan along with brother Kumbhakaran and son Meghnath - the Raavanwalas of Titarpur make them all.

Mahendra Pal Rao, better known as Mahendra Raavanwala, says, 'We make them with our hands, decorate them with love. We can't bring ourselves to see them burn. No one from my family does.' Forty-nine year-old Subhash Raavanwala, who has been making effigies for the past 35 years, adds, “I can't see my hard work go up in flames.'

Mahendra is in his mid-fifties and has been making the effigies for the past four decades. In his other avatar, he is a tourist taxi driver. Post Rakshabandhan, all his relatives and their children come together to give shape to the demon king's curly moustaches, broad lips, jutting chin and bulging eyes.