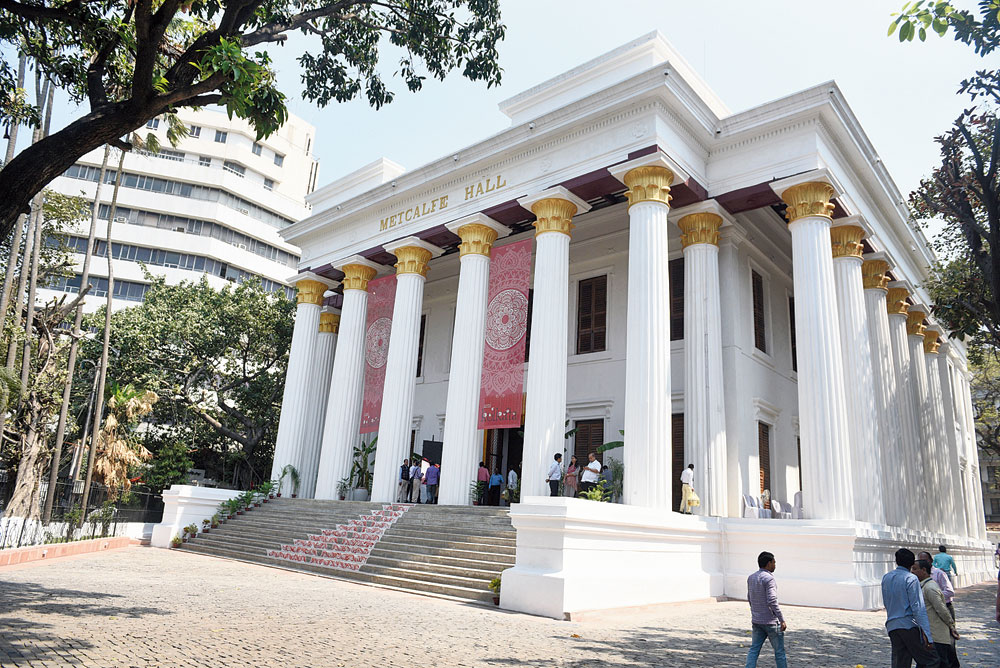 Metcalfe Hall at the crossing of Hare Street and Strand Road, overlooking the Hooghly, and Belvedere House on the 30-acre Belvedere Estate in Alipore were thrown open as public exhibition space by Governor Keshari Nath Tripathi on Friday.

“Most of Indian Museum’s collections are kept in store for lack of space, only about six per cent is displayed at the museum. A room at Belvedere House has now been made available to us to display some of the artefacts from the store,” museum director Rajesh Purohit said.

Built between 1840 and 1844, Metcalfe Hall is noted for its lofty Corinthian columns and colonnade. The building has been restored by the Archaeological Society of India (ASI) from an alarming state of dilapidation.

“The most challenging task in restoring Metcalfe Hall was laying the area around the monument with red sandstone and basalt. These were heavy and had to be cut precisely to create a slope to prevent water from collecting,” said Nandini Bhattacharya Sahu, the regional director of ASI.

The restoration of Belvedere House in Alipore was carried out by the Central Public Works Department (CPWD), which is also responsible for its maintenance. “We spent Rs 19 crore over five years to restore the building,” said Shrawan Kumar, joint secretary, ministry of culture and director general of National Library.

The white two-storeyed edifice, built in honour of Governor General Lord Metcalfe’s contribution to freedom of the press, stands on a 10-feet-high basement with 30 huge columns — an example of British imperial architecture of the middle 19th century. The online gallery of British Library that hosts a hand-coloured print of Metcalfe Hall from the Fiebig Collection captions the picture as “designed after the Temple of the Winds in Athens”.

“A lot of effort went into restoring the eastern portico that was entirely damaged and had to be redone from scratch,” Maheshwari said. “The roof was in bad shape, we carried out water treatment to prevent seepage. Lime plastering was done meticulously in consonance with the original.”

The capitals of the Corinthian columns have been painted golden. Inside the grand staircase, paint has been scraped off from the huge wooden doors and windows to restore the original colour of wood. An intricate web of wrought-iron work lends an old-world charm. Both the west gate overlooking the Hooghly and leading to a majestic flight of stairs and the east gate have been repaired and are now operational.