A doff to Duff

Inside an olden jailhouse, memories of a 200-year-old institution 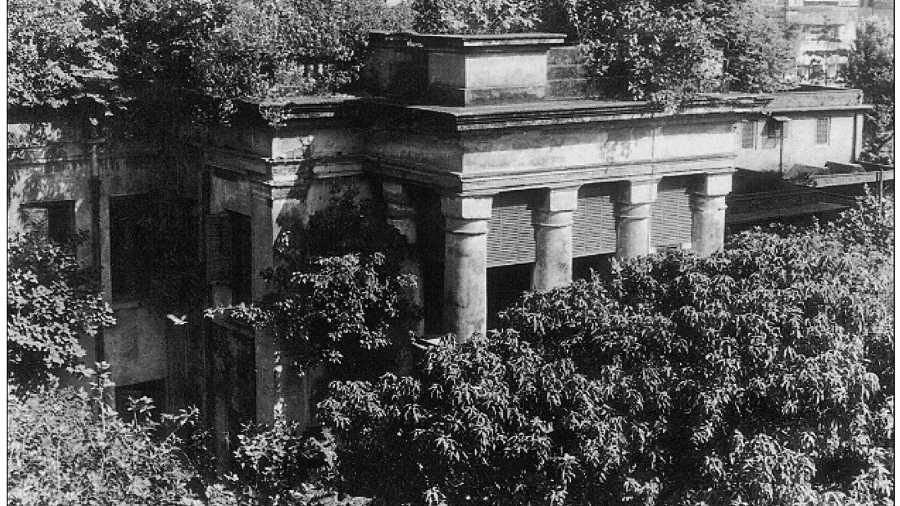 Sometime ago, a member of a Facebook group on old Calcutta had posted some images of chunks of concrete that had come dislodged from a dilapidated old building and lay in a giant heap in front of it. While the humongous building was definitely in Nimtala Ghat Street, members were confused about its identity. Was it Duff College? Or was it the Jorabagan Police Station?

Actually, it is both.

As we arrive at Duff College — rather its remnants — our ears are greeted by the beat of drums. Some festivity? No it was a “malaria awareness” campaign led by two youngsters-turned-mosquitoes like the 19th century shongs (mummers). Blocks of brand new tenement-like flats have come up in this ancient neighbourhood but it is undecided about its presence in the 21st century.

Even people who had lived there for 27 generations and more were not aware that the Jorabagan thana was originally Duff College. Aloke Kumar Dutta, pallid, frail and fine-featured, is a member of the Hathkhola Dutta clan whose paterfamilias moved to north Calcutta from Gobindapur in the Maidan where the British undertook to construct Fort William. Dutta says his bedroom window overlooks the former thana, and the quarters of the officer-in-charge were also housed in the same building, now in the last stages of dilapidation.

“Detainees in jail custody were held in the lock-up and at night their wails made it impossible for us to sleep,” says Dutta, 75, who retired as the registrar of Calcutta High Court. His wife, Dipa, picks up the thread, “I too faced the same problem after my marriage.”

Later, when I walked down the Kashi Dutta Street side of the thana, I saw the heavily barred cells.

The Duttas live on the top floor of a three-storey building made over in recent times. The staircase and floors are a brilliant red, and the carved console table is a relic from the past. A row of broad columns — quite as broad as the Ionic columns of the thana next-door — along the façade gives away the building’s age. The coat of rough cast plaster on the columns was meant to keep away posters and graffiti. Dutta expresses surprise when told that the thana was originally Duff College. The building was abandoned around 1985 and the thana shifted to the smaller building in front of it, which was probably the outhouse. 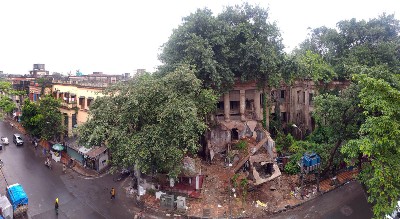 Bang opposite Duff College is the smart red-and-cream building where Suresh Chandra Chaudhuri had founded the East Bengal Club on August 1, 1920. Rajesh Chaudhuri, 52, who had come from Delhi for the last rites of his father, was kind enough to allow me to peer at Duff College through their kitchen window. But my vision could not penetrate the pall of leaves. Chaudhuri said he distinctly remembered the Sikhs who sought refuge in the thana after Indira Gandhi’s assassination.

Duff College stands on a rectangular plot facing Nimtala Ghat Street and sprawls from Mathur Sen Garden Lane on its B.K. Pal Avenue side to Kashi Dutta Street. The building is so densely forested with parasitic plants that one has to view it from several points. Abandoned vehicles disintegrate into piles of rust before what is the rear of the building, and pavement dwellers have set up jhuggis on the strip outside the railing.

In an entry on this institute, Radharaman Mitra had written in Kalikata Darpan: “Duff College’s own building (74, Nimtala Ghat Street) had 28 rooms. A thousand to 1,200 students could sit there. Besides, it had three halls, of which two had galleries; these could accommodate 450 and 700 students, respectively. It also had a library and a laboratory.”

Way back in 1999, I had met Alok Roy, who authored the book Alexander Duff O Anugami Kayekjan, and was associated with this institute as a student from 1953 to 1957, and lectured at Scottish Church College from 1960 to 1998. He said, in 1830, the General Assembly of the Church of Scotland sent its first missionary, Reverend Alexander Duff, to establish the first English medium school. Duff opened General Assembly Institution (later Scottish Church College) near Hedua. But in 1843, following dissension in the Church of Scotland, while this institution remained with the Established Church, the breakaway group comprising Duff and his three colleagues — Ewart, Mackey and McDonald — joined the Free Church of Scotland.

Duff then opened the Free Church Institution on rented premises and later constructed a new building in Nimtala, for which he bought a plot for Rs 18,000. He raised the money through donations and subscriptions and it took about two years to complete the building. Duff was its principal till 1863, as he earlier had been of the General Assembly Institution. After his death in 1878, it was named Duff College, a name once emblazoned on the building.

Rev. Kalicharan Banerjee, also an evangelist; Shakespearean scholar J.C. Scrimgeour; Sir Suren Banerjee; and Henry Stephen, who later became professor and head of the department of English at Calcutta University, were among the distinguished teachers at this college. In 1908, both churches reunited. So the Nimtala Ghat Street institution shifted to Hedua and was named Scottish Church College.

Roy had said Duff may have been an evangelist but he was also responsible for the enlightenment of the benighted masses. Time and again there has been talk of restoring Duff College.

Nothing came of it.