Real-life versions of delicacies from the world of Miyazaki 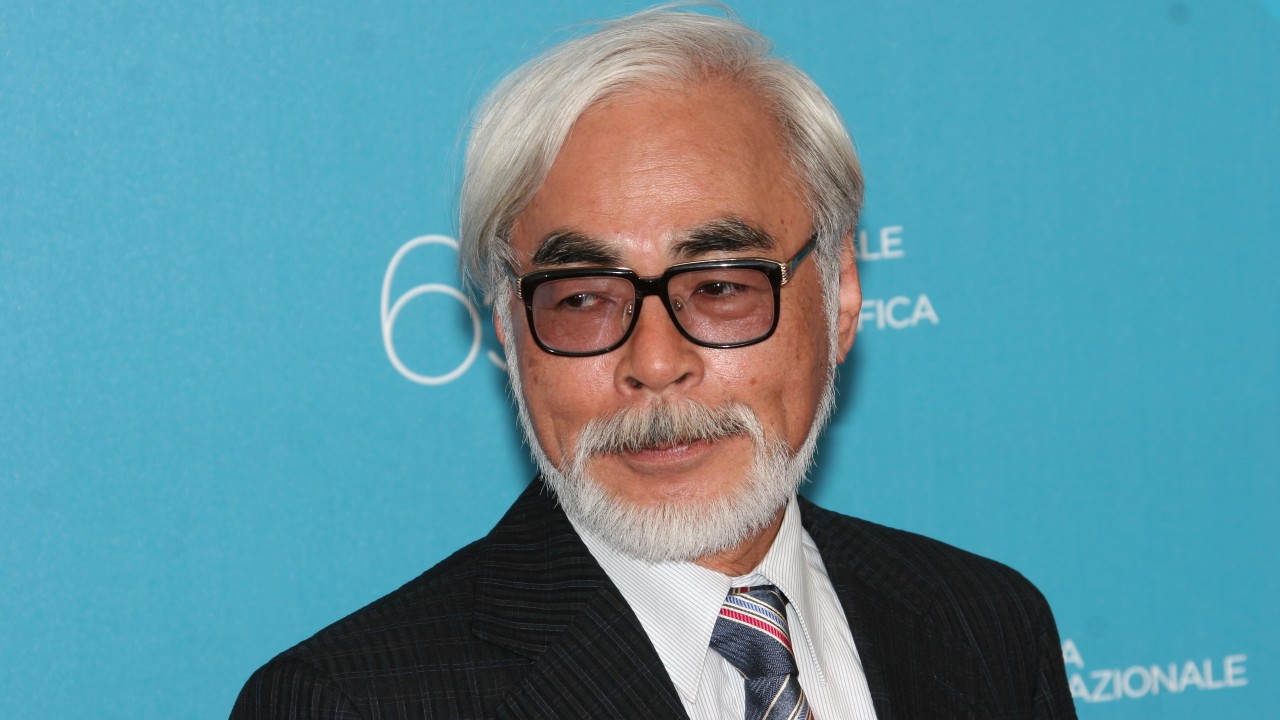 Japanese animated series and animated feature films have a distinct style, format and look that distinguish them from the kind of animation produced in other countries. With an international fan base and immense popularity, anime is arguably one of the most loved styles of art when it comes to animation, globally. Being a huge fan of Hayao Miyazaki — the man behind the magic brewed at Studio Ghibli — we couldn’t help but notice the important role food has played in some of his films. Studio Ghibli is a Japanese animation film studio founded in 1985, which holds a glittering legacy of having produced some of the most recognisable and critically applauded animated feature films in the world. Known best for his hand-drawn cinematic masterpieces and his intricate world-building, Miyazaki has earned himself the title of being the ‘Walt Disney of Japan’ for his careful attention to detail.

One of the critical areas of interest for most Miyazaki fans is his silent use of food and how he wields it to add to a scene, reveal the nature of a character, or to establish a telling atmosphere. Both irresistible and mouth-watering, we break down the top six delicacies from the world of Miyazaki, and draw up a list of their real-life versions found in our beloved city. 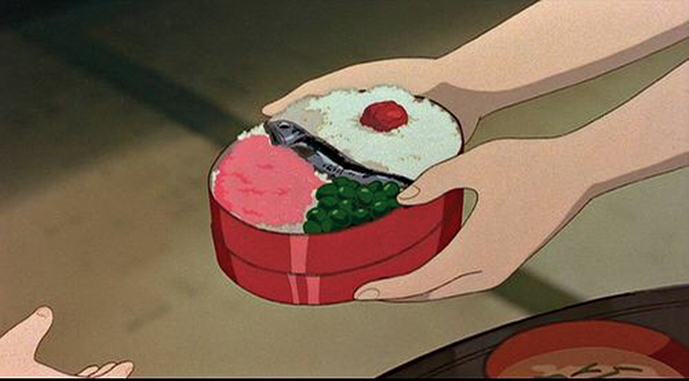 A brilliant example of how Miyazaki uses food to spell out the dynamics of a simple household. Satsuki’s Bento Boxes are made with love for her dad, little sister Mei, and herself, and are heart-warming and absolutely delicious to look at. But at the same time charged with a shade of melancholy as the audience watches Satsuki bustling around the kitchen preparing her Bentos with the unspoken absence of her mother hanging in the air.

Bento Boxes are Japanese lunch boxes that have a single meal packed in separate compartments. Satsuki’s Bentos are telling of her love for her family as she fills them with rice topped with a single umeboshi (pickled plum), sakura denbu (seasoned and dried codfish), edamame beans, and a whole-cooked fried shishamo fish. The simple steaming bento box is used by Miyazaki in My Neighbour Totoro to hint at the necessity of the elder daughter Satsuki Kusakabe, to grow up much before her time in order to help shoulder some of the responsibilities of the household. 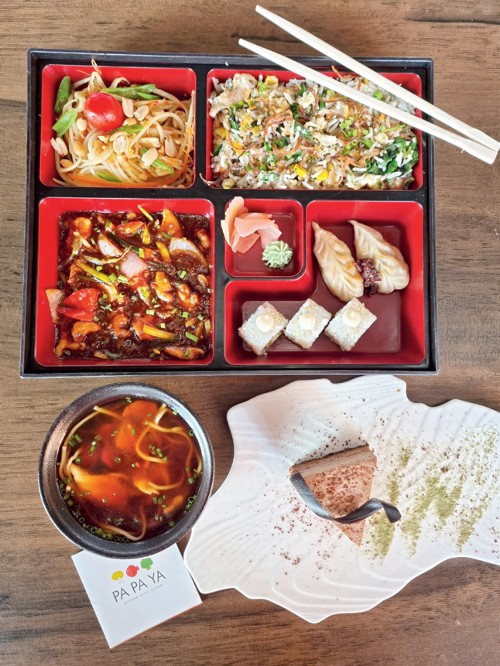 Real-life counterpart: Bento Non-Veg, priced at Rs 699 and Rs 799, at Pa Pa Ya. With two variants, chicken and shrimp, the bento boxes come with California Maki, Chicken Gyoza dim sum, Hargau dim sum, Braised Sliced Chicken, Gong Bao Shrimp, corn and spinach fried rice, ramen and an aerated chocolate matcha dessert. You can log on to Swiggy and Zomato for placing your order or call on 9073707070 for more information. 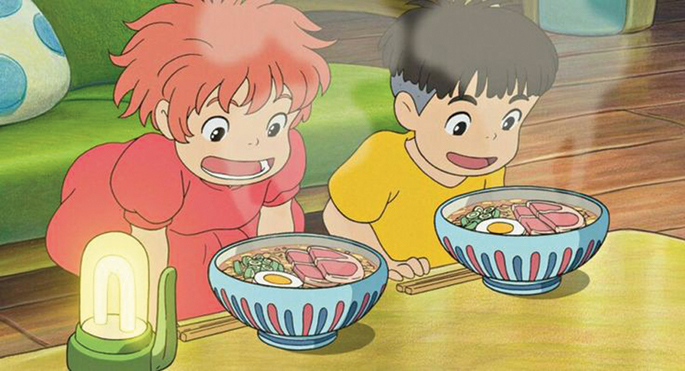 One of the most iconic uses of ramen in Miyazaki films is in Ponyo where the titular character — a fish-turned-young girl — finds inexpressible joy in the steaming bowls of hot ramen presented to her and her friend Sosuke by his mother. Ponyo, which is injected with the artful style of Miyazaki’s magical realism, finds something joyfully mundane and humane in that simple bowl of ramen that is topped with two juicy slabs of ham, half a boiled egg and finely chopped scallions.

Miyazaki allows the bowl of ramen to speak for itself by showcasing, in just a handful of minutes, the gleeful excitement of a magical young girl who shares a simple meal with her human friend. She is overjoyed especially by the ham and this simple experience of hers with human food effectively links her to the real world away from the sea and the magic, and does so without any words, just many strands of noodles! 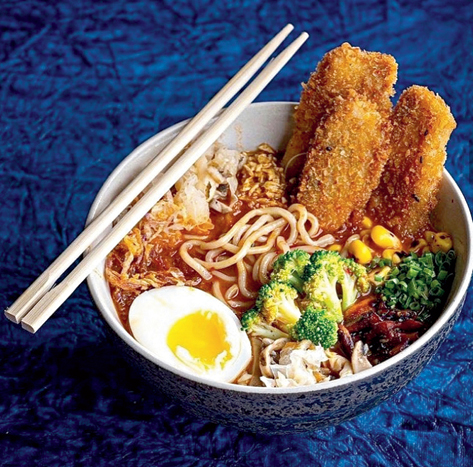 Real-life counterpart: The Seafood Tempura Udon from The Fatty Bao, priced at Rs 545. This bowl of ramen has an aromatic and spicy fish and prawn broth with Japanese seasoning, calamari, prawn and fish tempura and shredded nori. You can log on to Swiggy, Zomato or call on 8420309813 for direct delivery. 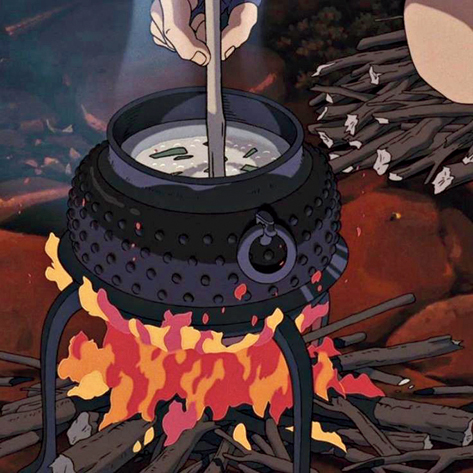 The strategic placement of the Okayu in the film corresponds to a break in action, where our injured hero Ashitaka is allowed to rest for a brief moment, away from enemy eyes and indulge in the healing flavours of the simple porridge. Okayu is symbolic of the new chapter in Ashitaka’s life as he wanders in exile, trying to find a cure for his cursed arm.

The porridge is simple enough to make with just rice and water and is popular in Asian cuisine under different names like ‘congee’ in China and ‘jook’ in Korea. This is often given to the sick and elderly as it is easy to digest when you are at your worst. This simple porridge becomes a companion for our hero, battling time on the road to save himself and his village. 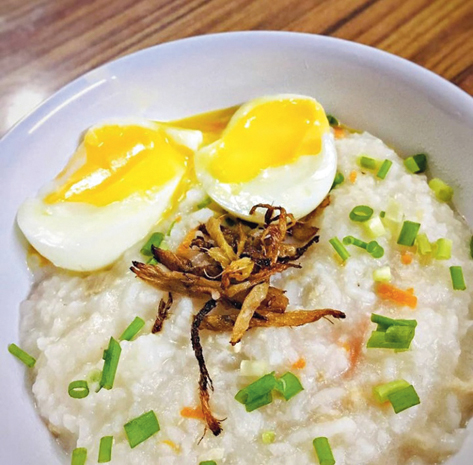 Real-life counterpart: Chicken Congee, priced at Rs 280, from Jessie Yung’s Kitchen. The simple and comforting congee is served here with sauteed ginger and boiled egg. They recommend you to have this with a side of chilli chicken or pork, for an added dose of flavour. Call on 9836945627 to place an order directly. 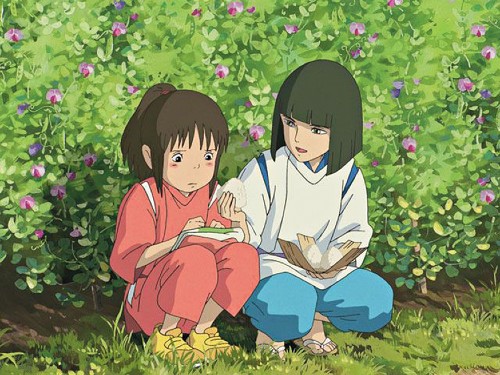 A film that abounds in scenes that utilise food to make a point. The most poignant of them being when Haku, a river spirit, offers three pieces of onigiri to Chihiro the morning after she visits her parents for the first time. Chihiro is the protagonist of the film, a young girl who is lost in the spirit world after her parents turn into pigs for eating forbidden food. Haku is Chihiro’s only friend in the spirit world.

A visibly moving scene, with little to no dialogue, the simplicity of the onigiri offered stands in stark contrast with the overwhelming sense of grief and loss felt by Chihiro, who finds herself indefinitely stuck in the spirit world with just Haku to depend on. The scene intensifies when Chihiro takes the first bite of onigiri and breaks down into silent tears, with the onigiri becoming symbolic of Chihiro’s final moments of grief before she has to dive back into the spirit world to try and save her family.

Onigiri is a Japanese snack, made with rice and a filling of meat, vegetables or simply a bit of wasabi, shaped in triangles. It is also often wrapped in nori or seaweed, and is popular in Japan as a comfort food that’s easy to make and perfect as a grab-and-go bite. 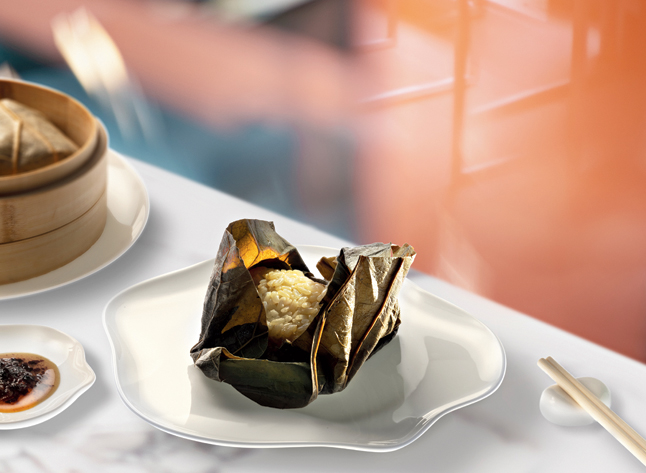 Real-life counterpart: Sticky Rice in Lotus Leaf, priced at Rs 440, at Yauatcha. The traditional Japanese sticky rice, one of the main ingredients for onigiri, comes wrapped in lotus leaf in this contemporary version of the dish, along with a filling of shiitake mushroom, succulent chicken and dried shrimp. You can log on to Swiggy, Zomato or call on 9222222800 for direct delivery. 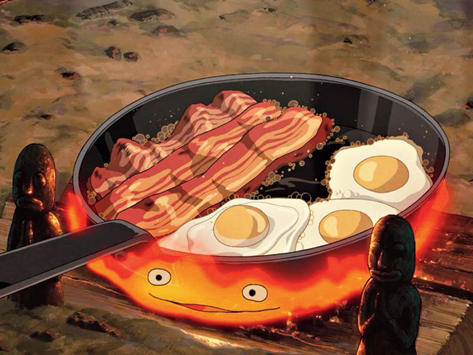 What: Howl’s Bacon and Eggs

Arguably one of Studio Ghibli’s most-loved food sequences, the breakfast scene in Howl’s Moving Castle is animated to the point of perfection, where the audience is inexplicably drawn towards the regular bacon and eggs made by Howl (with a little help from Calcifer, the fire demon, of course). Howl’s Moving Castle is a fantasy film, loosely based on Diana Wynne Jones’ book by the same name, where a young girl called Sophie takes refuge in the home of a wizard called Howl, after she is cursed by an old witch and turns into an elderly woman.

What entices the audience towards this scene is the use of both audio and visuals by Miyazaki to build an atmosphere of homeliness between the dysfunctional occupants of Howl’s castle. Amongst the warm crackling of Calcifer’s fire, the sizzling of fresh slabs of bacon on a frying pan and the smooth cracking and frying of six eggs, all sunny side up, we meet the smooth and suave Howl. This simple act of serving breakfast reveals much about each character and the state of affairs (or lack thereof) in the castle, giving it a life of its own. 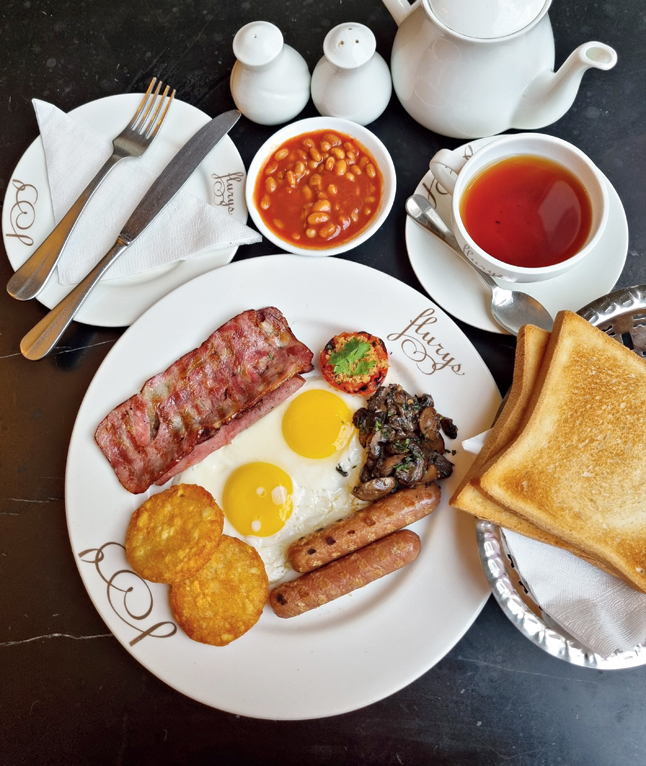 Real-life counterpart: The All Day Breakfast, priced at Rs 750 and 900, at Flurys. You don’t just get bacon and eggs but grilled chicken sausages, a slice of ham, grilled tomato, hash brown, mushroom, baked beans, seasonal fruit, toast, butter and a beverage too! Log on to Swiggy, Zomato or call on 9730325528 for direct delivery. 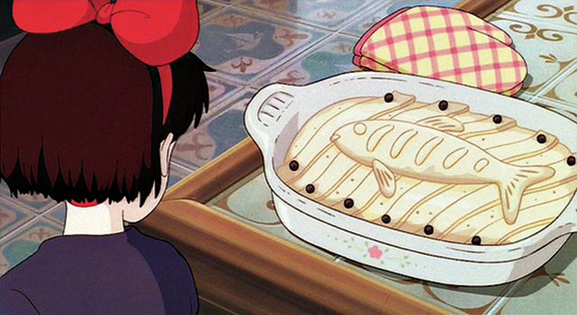 What: Herring and Pumpkin Pie

A coming-of-age film of a young witch called Kiki, who leaves home to find her own space in the world. Kiki takes up a job as a delivery girl and encounters the humble and odd Herring and Pumpkin Pie made by a seemingly isolated and lonely old woman for her granddaughter’s birthday.

The scene builds upon Kiki’s helpful nature and hopeful characteristic where she goes beyond her duty as a simple delivery girl to help the old woman bake the pie in an old-fashioned furnace oven. This grandma’s special pot pie is unique in its ingredients, lined with puff pastry and olives, and looks deliciously warm and nourishing, especially on a cold, rainy day.

The pot pie and the subsequent rejection of it by the haughty granddaughter, plays a central role in the story by tilting it towards the ultimate maturation of the titular character and her thoughts on life and work, which allows the film to move along. 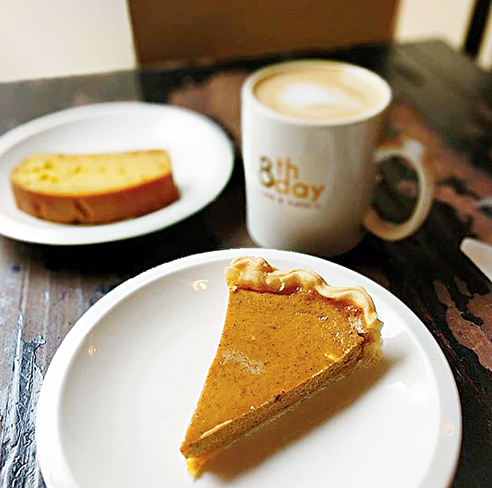 Real-life counterpart: Pumpkin Pie, priced at Rs 129 for a slice, at 8th Day Cafe & Bakery, an extremely difficult to make dessert that’s considered an American Thanksgiving staple. A rich, spiced pumpkin pie with just the right amount of sweetness to warm your heart, keeping the incoming monsoons in min    d. You can log on to Swiggy and Zomato.