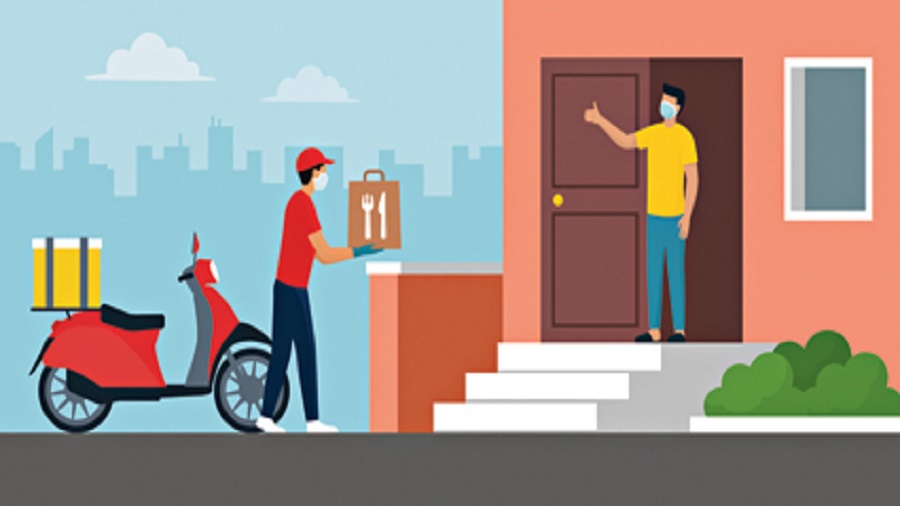 There are mobile apps for accessing the menus and virtual reality videos that take you through the preparation of your food while you drive your way to the restaurant
Sourced by the Telegraph
Vikas Kumar   |     |   Published 05.09.20, 06:59 PM

I was rather amused the other day when visiting a friend and hearing a small group of adolescents bantering, not with each other but with poor Alexa, the virtual assistant that has been the only real interaction with the verbal outside world for many over the last five months.

So, one among the giggly batch asked Alexa, in between bashful chuckles, “Alexa, who is a Covidiot?” While Alexa, the ‘know-all’, went a virtuous “Sorry, I am not sure” and the kids went on to other important conquests, I was wondering myself what the word meant and if I had heard it right. Turns out, the word was ‘legit’ and was only one of the many words that this pandemic has contributed towards expanding our vocabularies.

Seems like while we were struggling with ‘flattening the curve’ and wondering if respirators were mini ventilators, the world had invented a lingo of its own during this dreadful span. So a ‘Covidiot’ is apparently a person that blatantly ignores the Covid health guidelines, while a ‘Covidient’ is someone who is the opposite of it, a ‘Covideoparty’ is when a group of lockdown bored lot decide to watch a movie together, on different screens.

While at it, don’t just ‘doomscroll’ your way through this article, since it is not meant to scare you with depressing news, but you might as well pour yourself a ‘Quarantini’ (the cocktail-to-go when quarantined), you know, just to get your mind off the improbable ‘coronapocalypse’. While trying to figure out how a rather dismal period in history gave rise to these rather eclectic terms, which obviously are trending all over the Internet as we read this, I was also left wondering if these terms will stick on once this pandemic is over. Perhaps these will, if nothing else, then just to remind each other what each one of us had sailed through.

Talking of trends, how about other ones that this pandemic sort of brought to the fore and which might last way beyond the point in time when we’ve woken up from this nightmare? How about trends related to food? I have been writing about various food and lifestyle trends that emerged due to this pandemic, most for good, and I do believe that many of these will last way longer than we give these credit for. Let us discuss a few among those.

So there always was a market for takeaway foods, by and large limited to the days you didn’t want to cook or were anticipating all restaurants to shut while you felt hungry at 3am after a round of merrymaking with buddies. While this market, driven by the too-busy-to-cook millennial, was already on a growth trajectory, the prevalence of this pandemic saw most, if not all, high-end restaurants come up with their own takeout and delivery menus with all their iconic dishes, adapted in packaging and delivery to the current situation. While this pandemic is hopefully on its way out, I do believe that this trend of takeout and delivery of all kinds of foods, including gourmet top-of-the-line offerings, will sustain itself. That’s mostly because first, it might still take a while for people to reconcile with the ‘normalcy’ in the post-Covid-19 period, resulting in restraining themselves from visiting their favourite restaurants for a while and also because the food industry itself has realised the merits of this model of guest service and will most likely be quite aggressive in promoting and marketing this for its inherent cost, taxation and logistical advantages.

Yan Can Cook —So Can You

While I have borrowed this tagline from the very popular cooking show featuring the Chinese American chef Martin Yan, who has been telling the people across America and the world about the dexterities of cooking at home for the last 30 years or so, I guess he is being taken most seriously now. According to a report in the reputable Harvard Business Review, more than 50 per cent of Americans are cooking more than they did before the pandemic and 35 per cent say that they enjoy cooking more than before.

While many predicted cooking as an activity, especially by the young, urban, dual-career population, to be headed the ‘sewing’ way, wherein just a few decades back everyone had a sewing machine at home while now only a fraction of the young sew anything, except for a small minority that enjoy it as a hobby. But, apparently, this pandemic has woken up the woke when it comes to realising our inherent cooking potentials.

If the Internet is to be believed — and we do believe the Internet — the gorgeous ‘home-cooked’ pictures and videos flooding the web alone can tell us about the brawny trend of the young and the old. The recreational once-in-a-while cook to the seasoned  I-cook-better-than-professional-chefs individuals, all have realised that cooking at home is not what they should have dreaded and that most foods are actually quite easy to prepare once one has a go.

In my view, one of the most defining long-term trends that will continue way after this pandemic is that many of the average folk — having realised the virtues and importance of being able to cook at home and tried their hands at cooking dishes that they only ever associated with their favourite restaurants — would add to a new breed of ‘home chefs’ and ‘YouTube chefs’ who will encourage and inspire the average ‘culinarily illiterate’ among us to try our hands at reasonably involved gourmet cuisine. After all, if Yan, Vihaan, Aryan and Hassan can cook, so can you!

I have written about it in the past and, I reiterate, this pandemic has had all of us thinking about the uncertainties of lives and livelihoods and, to that extent, had us realise the virtues of practising restraint in all our spending activities, including food. While the ‘pandemic pantry’ is a thing now where people are trying to stock their pantries and fridges in the most economical way possible, it is also true that most among us want to see our supplies last that much longer and ‘leftover food cuisine’ is emerging as a trend in itself.

It is not unusual to find repurposed, or ‘upcycled’ as it is respectably called, ‘risotto parathas’ or ‘dal-chawal pancakes’ unabashedly confirming to the trend of ‘use all-waste nothing’ style of cuisine. It is also true that this pandemic had us recognise and realise the importance and efforts of the people behind producing and cooking our food and that by way of respect to them, apart from the obvious monetary savings, many among us now feel somewhat guilty when trashing away that bit of pasta, or if you are someone like me, throwing away that ‘gorgeous’ watermelon rind.

I had written a piece called Delicious Discards and was really awed by the positive responses I got to the article, further entrenching my belief that, going forward, most among us will understand the true value of food, independent of its price, and will behave responsibly towards consumption and preparation of it.

Gone are the days when the air fryer used to be the most remarkable piece of kitchen technology. While restaurants across the globe, especially the upmarket ones, had been harnessing the power of technology for a while towards easing their processes such as table reservation, billing and purchase, we realise that technology has played a defining role in the way the food service industry is responding to the pandemic-created protocols and the general functioning in these times.
While there are now mobile apps for accessing the menus and virtual reality videos that take you through the preparation of your food while you drive your way to the restaurant, the development of artificial intelligence has also had many restaurants and hotels assign robotic interfaces to the guests while maintaining the personal, albeit non-physical ‘touch’.
Restaurants are also using technology to reach out to guests, deliver food, obtain feedback and provide updated information. Some restaurants are also experimenting with wearable devices and virtual reality training for its staff to prepare them for the changing industry demands. On the other hand, some web portals have developed an image-to-recipe generation system that enables users to reverse engineer recipes by just uploading an image of the dish, following which the system generates a recipe and ingredient list and even related videos on the web.

Another significant culinary trend emerging out of this pandemic is the prevalence of people going back to the most basic, comforting dishes and recipes. If you closely scour the Internet, you’d find that most youngsters trying their hand at cooking don’t care much for the modern fusion genre — think dishes like flash fried scallop mousse with chocolate foam. They are, however, experimenting with the tried and tested dishes, the ones that evoke familiarity, nostalgia and easement.
Here I present one such dish (see box), a please-all preparation that can be made in minutes and can be had for any meal period while instantly lifting your mood and those of the ones around you. It is the paradigmatic classic Egg Benedict. Bon apetit! 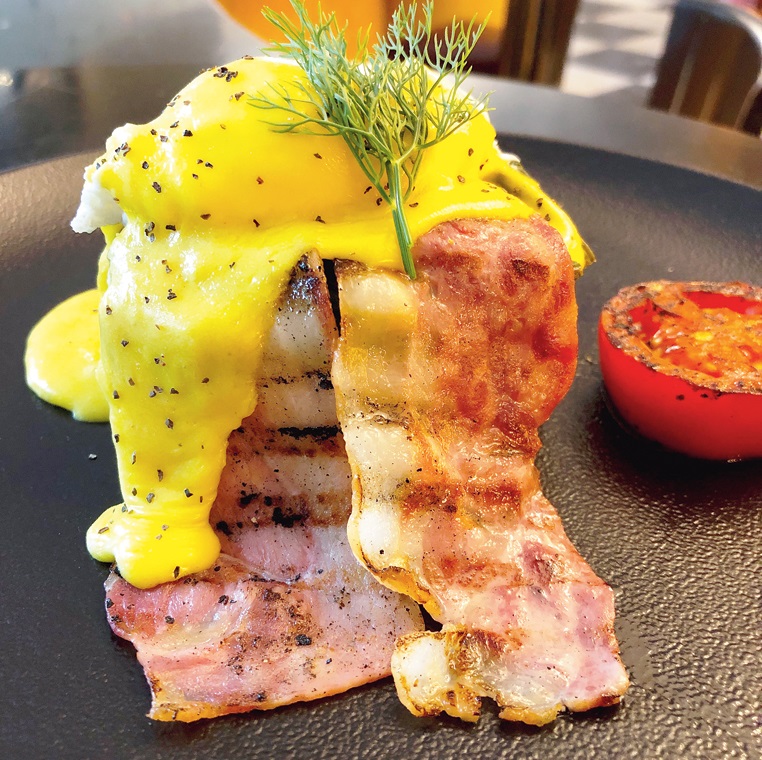