Easter traditions: The stories behind

Delving into the symbolism of the egg, the bunnies and hot cross buns that are staples for this festival 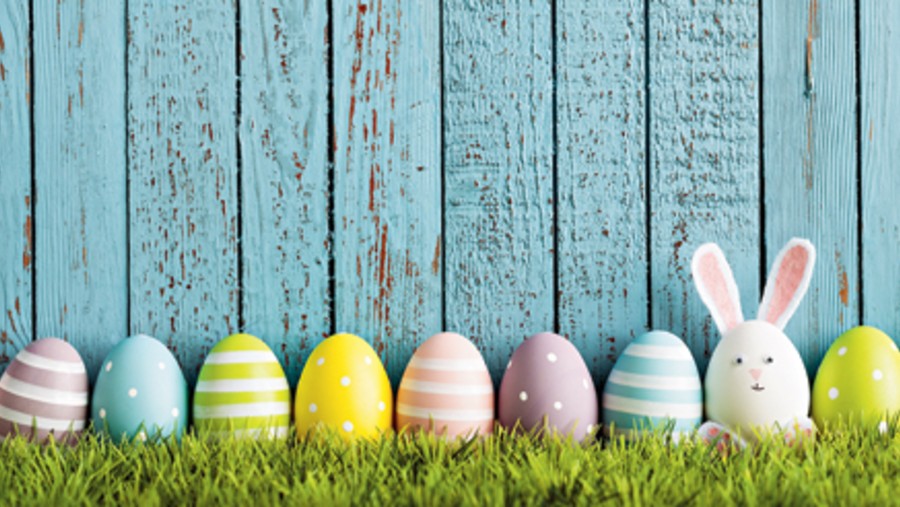 Of all the religious festivals celebrated across the world by the faithful of different religions, few come close to the festival we are celebrating today, Easter, in terms of the symbolism it portrays. The fact that this festival follows a long period of 40 days of fasting and restrictive consumption of food makes it unique in many ways. This solemn abstinence also gives a unique, sombre feel to the entire festival where festivities mingle with spirituality and Christians across the world observe the entire Lent period with moderation, discipline, prayers and penance.

The thing that really excites me about Easter, however, is to see the little child brought out in all of us. It’s interesting to see grown-up chefs discussing the pattern of the Easter egg, the colour of the bunny’s bow or the frill of the Easter bonnet. Also, I think Easter is by far the most ‘symbolic’ of all festivals right from the symbolism of the egg as the symbol of rebirth, the bunny as a symbol of fertility, and 11 marzipan balls on the simnel cake as a symbol of Jesus’s true disciples.

Then there are folklores galore, right from the Easter egg hunt in England to the silencing of the bells in France and burning of Christmas trees in Germany. I think Easter is the time to reiterate our faith in our customs and traditions and to enjoy the company of friends, relatives and, especially, children.

As most of us know, Easter celebrates the resurrection of Jesus Christ three days after the Crucifixion and has its origins in the beginnings of Christianity. Many cultural and religious historians agree that the celebration of Easter converges the observances of three religions — Pagan, Hebrew and Christian. The word ‘Easter’ itself is said to have derived from the Anglo-Saxon goddess of spring and fertility — Eostre. In almost all faiths and festivals, certain prominent symbols have come, over the centuries, to signify certain attributes of the festival and Easter, by and large, has a larger share of those than most. Let us discuss some of those easily identifiable symbols that we all know and recognise but have probably not given much thought to. So here goes.

The most prominent symbol of the festival of Easter, without a doubt, is the Easter egg. Colouring Easter eggs and Easter egg hunts have become more of a secular cultural observance than a strictly religious one. Eggs symbolise life and birth and have been used as a symbol for regeneration and fertility.

While the egg itself is considered a symbol of life, the tradition of colouring the Easter eggs is also ancient and has been practised across the churches since the Middle Ages. One argument is that due to the restrictions on egg consumption during the long 40-day Lent period, people used to decorate the eggs laid during that period to segregate those from the normal eggs that were laid during the ‘non-holy’ period.

At some point it seems, children got associated with the entire exercise and thus came the tradition of colouring the eggs bright and in different patterns. In orthodox Christianity, the eggs are coloured red to signify the blood of Jesus Christ and His Crucifixion.

The Easter bunny is also a highly recognisable symbol of Easter festivities although there is no mention of that in the religious scriptures. Apart from rabbits being considered rather prolific procreators and that being associated with fertility, the rabbit is also seen as an ancient symbol of the moon and matches the festival of Easter since Easter is also celebrated according to the moon’s position.

The rabbit’s burrow is also said to symbolise Jesus coming out of his tomb. According to some accounts, the Germans practised a tradition of an egg-laying hare called Osterhase and when they migrated to America in the 1700s, they popularised this tradition there and, eventually, across the world.

Traditionally, the celebration of Easter almost always features a preparation of a lamb dish, almost everywhere in the world. John the Baptist referred to Jesus as the ‘Lamb of God’.

Historically, the lamb would have been one of the first fresh meats available after a long and harsh winter where no livestock would be available to common folks for consumption and Easter, falling in spring, would be naturally a time where all feasts would feature lamb as meat.

Lamb also has significance in the observance of the Jewish ‘Passover’ where the Jews used to paint their doorsteps with the blood of the slaughtered lambs so that God would pass over their homes and not bring the calamities associated with plagues that were common during the time. Later, many of these Jews converted to Christianity but the tradition of sacrificing lambs stayed on.

Among all the edible products that are sold during the Easter period, this bun takes the cake, well, in a way. Hot cross buns are traditional Easter food in England, where they are first baked during Good Friday and many break their fast with the hot cross buns.

Although hot cross buns are quite popular for Easter, these probably have pre-Christian origins. It is believed that these buns were made to celebrate Eostre, the goddess of fertility, by the pagans. The four quarters of the cross on top of the buns were said to represent the phases of the moon while the bun itself symbolised rebirth after winter.

The word ‘bun’ is also said to have Saxon origins where it meant ‘sacred ox’, the sacrifice of which was practised during the pre-Christ times. An old belief also says that if you bake hot cross buns on Good Friday, they wouldn’t spoil till the next year. As bakers, we’ve had rather limited success with that, but it is also said that the buns have medicinal properties and if someone falls ill, a small piece of the hot cross buns can cure them, including of serious illnesses.

Among the non-food symbols of Easter, the lily flower is among the most recognisable. Also known as the ‘white-robed apostles of hope’, the colour of the white lilies is said to symbolise the purity of Jesus Christ. The trumpet shape of the lily flower also represents the trumpet sounding that announced to the world the resurrection of Jesus, which came to be observed as the festival of Easter. It is also said that the process through which lily flowers grow is symbolic of the resurrection since lilies grow from bulbs that are underground for a long period. Lilies also find mention in The Bible and some think that white lilies spouted in the Garden of Eden as Eve’s tears fell to the ground. It is also said that lilies grew where Jesus’s tears fell from the cross. In any case, since lilies are aplenty during the spring season, these have been the preferred choice of flowers for Easter decorations and other ritualistic traditions for a very long time.

Since this is Easter, I would like to give two recipes that can be tried at home. These recipes are traditional as well as quite modern in the way they are presented. Lamb has been the meat of choice for Easter preparation for long and we will do a lamb steak but in a slightly different way. The perfect cooking of lamb is something that requires a bit of experience and culinary understanding, but this steak, made with minced lamb, does not require high levels of expertise and can be made ready in a very short time. Apart from that we will do the famed hot cross buns and appreciate how simple these are to make. So here goes: 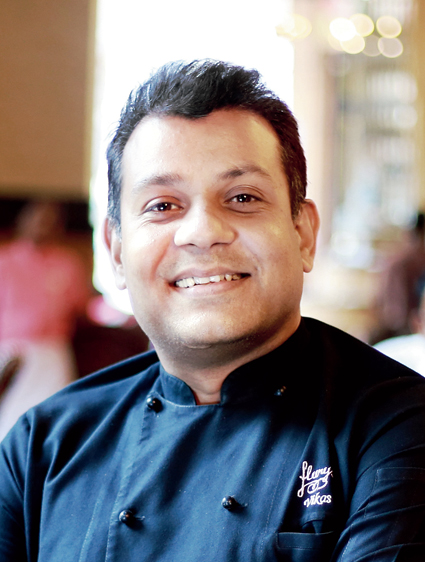 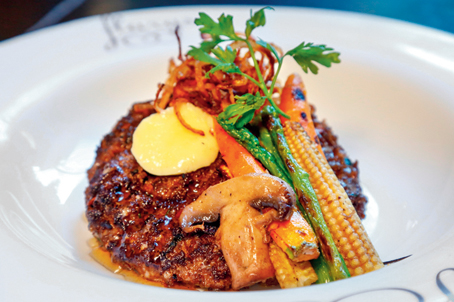 • Salt and pepper: To taste

• Mix all the steak ingredients. Marinate for at least two hours

• Shape into flat patties and grill on medium-high heat for about 6-7 minutes on each side. You can also pan-fry these with little oil just like burger patties.

• Take out from the heat and cover with silver foil.

• In the same pan, tip in the butter and then the garlic and mushroom.

• Once the mushrooms are tender, put the red wine and cook until mostly evaporated.

• Add the stock or a little water to adjust consistency. Add the chopped parsley and finish with cream.

• Put the steaks back in the pan and cook with the sauce for 2-3 minutes.

• Serve with your choice of tossed vegetables. 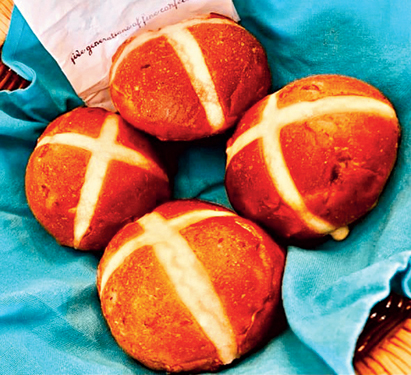 • Warm the milk slightly and add the sugar and the yeast, dissolve. Let rise for about 30 minutes.

• Add all the other ingredients and form into dough. Let it rise for 2 hours or until double in size.

• Knead back and let rise for 30 minutes.

• Form into small balls, about 50g each and place on the baking tray. Let prove until double in size, depending on the weather and the ambient temperature, this can take between two hours and four hours.

• To make the ‘cross’, take a tablespoon of flour and mix with a little water or milk and some sugar; the resultant mix should be of a paste consistency.

• Pipe the paste in the shape of a cross on each bun.

• Take out and immediately brush with melted butter. Let it cool to room temperature before serving.

• Can be kept for up to seven days at cool temperature. Do not refrigerate.