What is a Bengali’s monsoon without ilish? Deep fried fish, roe et al floating in golden oil or steamed with a generous coating of mustard, the fish head and tail cooked with aubergine, or a light jhol speckled with kalo jeere and a green chilli or two thrown in. There is no disagreement, no contest about the supremacy of ilish or hilsa in Bengali fare. The continuing debate has to do with which variety of the fish tastes best. The Telegraph got two ilish enthusiasts to take the floor and present their cases 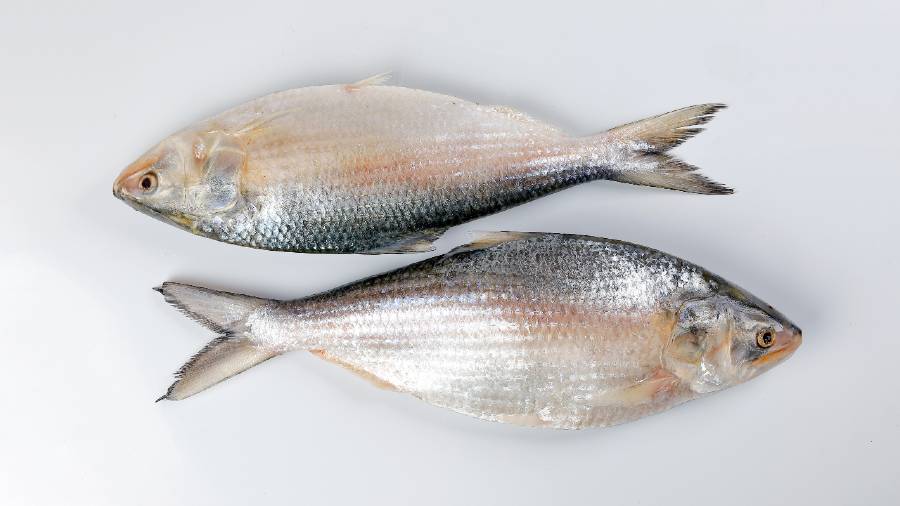 I am from Faridpur and I hold the Padma-r ilish dear. To me it is the tastier fish, but that is possibly because of the emotional connection.

When I was a boy I would accompany my father to Jadubabur Bajar in Bhowanipore. I still remember the cries of fishmongers there — “Sirajganj-er rui, Sirajganj-er rui... and Goalundo-r ilish. Goalundo-r ilish...” Sirajganj is a district in north-central Bangladesh today, and Goalundo in central Bangladesh is located near the confluence of the Jamuna and the Padma. Those days there was a broad-gauge railway line straight from Goalundo to Calcutta; and fresh catch from the ghat travelled to India.

Ilish is a delicate fish; it should not be manhandled. The fishermen of Bangladesh go out fishing in small boats. They don’t use trawlers that are common here, in Bengal. In fact, Bangladesh has banned the use of trawlers. Trawlers push the ilish into deep waters and it becomes difficult to catch them.

Bangladesh has always helped fishermen who trade in ilish. They have contributed in every way possible to make Padma-r ilish a brand. Do you know that Bangladesh’s Gramin Bank introduced the first mobile phones in the subcontinent and the first batch of sets were given to the fishermen, so that they could talk to the mahajans and bargain for the best price?

I have been to Bangladesh countless times. On one such trip, the fishermen had caught ilish from the Padma. They cleaned the fish, smeared it with salt and turmeric, added oil and green chillies, and buried the vessel in the sand. They pulled it out from the hot sand after 30 to 40 minutes. The smell, the texture, the oil, the taste of the fish... it was heavenly with steaming rice.

During the shoot of Padma Nadir Majhi (1993), we were served ilish at almost every meal — ilish bhapa, ilish bhaja, ilisher dim bhaja, ilisher tel and what not. It was right after the monsoons, and the Padma-Meghna delta was teeming with the silvery fish.

Do you know what they do with the fish that remain unsold? They throw them into huge woks and heat them to extract oil. This fish oil is then used to light kupis or small lamps.

So those who think that the Padma-r ilish is only good to taste and it is the Ganga-r or Hooghly-r ilish that has a high amount of fat will now understand how wrong they are.

Ghose is a filmmaker. One of his best-known films is an adaptation of Manik Bandopadhyay’s Padma Nadir Majhi

“Alik ilish ronge, moje lok dui Bonge.” Meaning — the dream of ilish alone is enough to intoxicate Bengalis on either side of the border. Ilish is the fish no one can have enough of. You would have heard it said that Alexander the Great died of food poisoning; some say he died after eating ilish from the Tigris. Then there is a story by Syed Mujtaba Ali about Mohammad bin Tughlaq and how he was so taken with ilish that he could not stop eating it and, consequently, died.

I have eaten ilish that weighs over four kilos but none tastes like the Hooghly-r ilish, also referred to as the Ganga-r ilish by some.

Many people think it is omega-3 that lends flavour to the fish. If that is the case, the Gujarat ilish or Godavari ilish should have tasted the same; but that is not so. Why? Because the flavour of the fish depends on the kind of feed it gets. Ilish eats nothing when it swims upstream to lay eggs. In the olden days, Brahmins believed that ilish feeds on carcasses and they shunned it. But that is incorrect. Ilish is herbivorous, eats planktons and diatoms. And the Gangetic delta has an enormous reserve of diatoms.

From the 16th century onwards, and before the Farakka Barrage came up, the main flow of the Ganga was diverted towards the Padma. Ilish available in the Padma is actually nourished by the water of the Brahmaputra, and it is via this river that ilish reaches Assam. So to all those who claim that the Padma-r ilish is the best because the fish spends time in freshwater there, I ask — how come you never credit the Brahmaputra which has more water than the Padma? Have you ever heard any Bengali ever proclaim that Assam’s ilish is the best?

If you ask me why I like my Hooghly-r ilish, it is because it is a fighter fish. The ilish that comes into the Ganga has to pass through so many hurdles — first, there is the zero mesh behundi net, then the scant water. The entry point to the Hooghly is also the international shipping route and there is a continuous turbulence the fish has to deal with. After all this it manages to swim up to Kolaghat or Baghbazar.

On top of this, my Hooghly-r ilish has to climb a ladder to reach Allahabad. The government has planned to create an eight-metre wide passage in the form of a ladder that the ilish will have to climb step by step. The ladder is meant to help the fish cross a dam. This has been done following similar projects for the salmon in various countries. It is a different matter that the salmon is not a scaly fish and not delicate like the ilish. It is also another matter that after the ladder is built, the government might have to train the fish adequately to climb it! But tell me, does the Padma-r ilish have to labour thus?

Think of it like this — we admired our lanky panky revolutionaries who fought against the well-built British armymen not because of their physique but because of the spirited fight they put up. My Hooghly-r ilish is exactly like that, a real fighter, a sangrami ilish. And that is why I like it best.

Dude, listen to this food prude