Simon Sebag Montefiore’s collection includes missives from the likes of Aurangzeb, Stalin, Gandhi and Hamilton. And they let on a lot about the writers 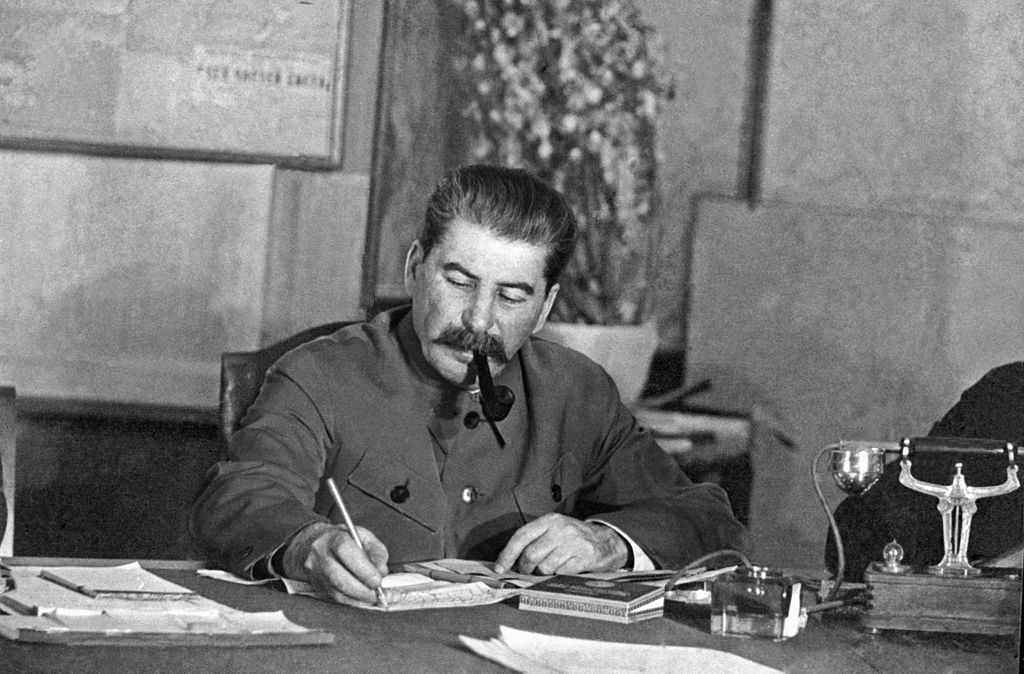 This book includes a note that Stalin sent around during a Politbureau meeting in which he suggested that one of its members, who he suspected of disloyalty, be hanged by his balls
Image: Wikimedia Commons
TCA Srinivasa Raghavan   |   Published 13.02.19, 07:52 PM

Babur writes to his son Humayun about the ‘diverse creeds’ of Hindustan and says he should ‘cleanse his heart of all religious bigotry’. He then tells Humayun to ‘refrain from the sacrifice of cow, for that way lies the conquest of the hearts of the people of Hindustan’. This letter is a classic in the early enunciation of secularism.

Then there is Aurangzeb. As he lay ill and dying, he wrote a despairing letter to his son. In it he regrets that ‘my valuable time has been passed vainly’. He also adds towards the end that ‘the foolish thoughts of women produce nothing but disappointment’ and concludes the letter saying ‘farewell, farewell, farewell’. Aurangzeb wasn’t a nice man, but this letter makes you feel sorry for him.

Gandhiji wrote an extraordinary letter to Hitler in 1940. It is an absolute masterpiece of forked tongue writing. He starts by addressing Hitler as ‘dear friend’ and says at one pojnt “…nor do we believe you are the monster described by your opponents”. Then he writes: “But your own writings and pronouncements…leave no room for doubt that many of your acts are monstrous and unbecoming of human dignity.” No wonder Hitler never replied.

He has divided these letters into 19 sections which makes it even easier to riffle through the book. There is, if you will, a letter for every mood. There are nearly 250 of them. Some of them are more than 2,000 years old. Some are from the 20th century.

Trump and other Americans

Mr Sebag has included the letter President Donald Trump wrote to Great Leader Kim Jong-un. It is entirely unremarkable, which cannot be said of the letters written by other Americans.

The one by Jacqueline Kennedy written to Nikita Khrushchev on December 1, 1963 – a week after her husband had been assassinated – is strange. In it she flatters him as a sensible man who doesn’t want the world to be blown up and tells him to work with Lyndon. There is just the hint of condescension which neither Johnson nor Khrushchev would have missed.

The most fascinating letters, however, are the ones between Alexander Hamilton, one of the writers of the American constitution and his arch rival, Aaron Burr. These letters are oblique in their wording, but the intent and emotions are clear. The two eventually fought a duel and Burr shot and killed Hamilton.

One could go on but enough unto the day. One most hope that there will be more such collections coming along soon. They are not just educative but also such fun.

Very few people in India have heard of Simon Sebag Montefiore. The fault is entirely that of publisher-importers who have done very little to promote Mr Montefiore’s books, which are about European history.

The genre in which he mostly writes was pioneered by Plato in his ‘Lives’ about 2,350 years ago. It comprises telling the story of people and events in a readily accessible way. Anyone who can read can enjoy this kind of book.

Mr Montefiore’s earlier works include several prize-winning titles ranging from a history of the Romanovs, Stalin, Jerusalem and a children’s story book about rabbits. He has also written three political novels. One of them even won an award.

In this book, Written History: Letters that Changed the World, he has waded through thousands of letters by famous people -- Gandhiji and Aurangzeb included -- and selected the best of them, at least according to him. The result is a nice little book that you can keep in the car for avoiding severe irritation in traffic jams.

The book also makes you wonder about privacy. How would you like it if a century or two from now all your emails were published? So be careful.

But never mind that. As Mr Montefiore says, ‘here we are’. He has looked for them and published these letters.

Stalin and other Europeans

Stalin, it seems, was a prolific letter writer and a neurotic nut case. But in this book Mr Montefiore has reproduced a note that Stalin sent around during a Politbureau meeting in which he suggested that one of its members, who he suspected of disloyalty, be hanged by his balls.

There is even a cartoon drawn by someone else who was present depicting the punishment Stalin had in mind. Later Stalin executed him as well. But there is also a love letter from Stalin to a woman in which he says “I am not simply sending you a kiss but kiiiisssing you passionately (it’s not worth kissing any other way).

James I, it turns out, had the hots for one George Villiers who he made the Duke of Buckingham. Sebag writes “James publicly kissed and caresses George” and declared once that he loved him. James didn’t want this to be seen as a defect and said “Christ had John and I have George.” He even called George his wife.