Malevolent Republic: A Short History of the New India tries to chronicle the trajectory of post-Independence India from Nehru to Modi and does not shy away from raising uncomfortable questions 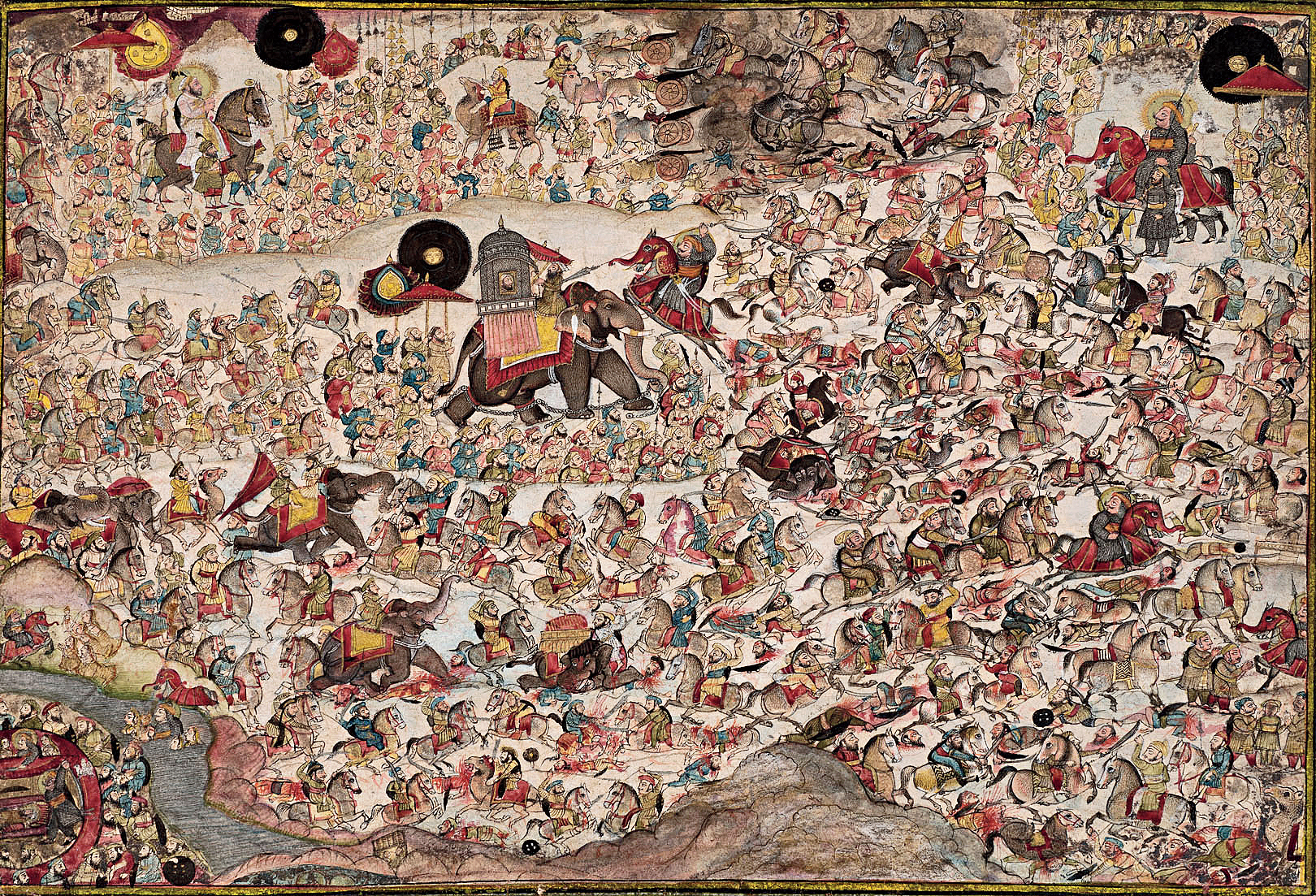 Detail from a painting attributed to Chokha depicting the Battle of Haldighati (1576) between the troops of Rana of Mewar and the Mughal Emperor, Akbar, led by Raja Man Singh of Amber
(Wikimedia Commons)
Subhash Gatade   |   Published 06.09.19, 10:42 AM

“The idea of a peace-loving, nonviolent India exists, persists, as part of a selectively constructed and assiduously cultivated national self-image in the midst of a society pervaded by social and political violence,” argued Upinder Singh, in her book, Political Violence in Ancient India. She had also added that pioneers of the Independence struggle were instrumental in creating this “myth of non-violence in ancient India that obscures a troubled, complex heritage”.

Malevolent Republic: A Short History of the New India by K.S. Komireddi, a commentator, critic and journalist who has written for leading Western publications, reminds one of this debate. The book tries to chronicle the trajectory of post-Independence India from Nehru to Modi and does not shy away from raising uncomfortable questions which demand broader contemplation as well as deep soul-searching.

The author seems concerned about the ‘total transformation’ of India under Narendra Modi since 1991 and how “Hindu rage that once manifested itself in localised violence has metastasised into a pan-national cancer”. He sees the danger of Hindu nationalism becoming the “official animating ideology of the republic” and of India becoming “Pakistan by another name”. Not limiting himself to an analysis of the situation, he also calls upon the readers to reclaim the republic which was “an instantiation of ideals worth fighting for: rising from the inferno of Partition” which “defiantly rejected the baleful idea that national unity could not be forged in the crucible of human multiplicity”.

On the ascent of Hindutva supremacism, instead of exteriorizing the roots of communalism to the arrival of the British or “[s]ingling the British out as uniquely disruptive villains”, the author unhesitatingly questions the “airbrushing of the pre-colonial past” and questions the attitude of bypassing “awkward questions” about the past. According to him, this is just another variant of the “[a]nti-colonial nationalism pioneered by Congress” which “had applied a romantic gloss on pre-colonial India: it was Eden vandalised by satanic Europeans”.

Exposing the fable of ‘Medieval India’, depicted in schoolbooks as an idyll “where Muslims and Hindus coexisted in harmony” resulting in the emergence of a composite heritage, he prods us to look critically at the internal asymmetries in our society, dotted with violence, and acknowledge these. The failure of secular historians to break new ground in this direction prompts him to underline how “[t]he secular establishment squandered a rare opening in the early decades of the republic to heal that wound by supplying Indians a forthright accounting of their history. Had India been honest about its past — about the atrocities that were perpetrated and the heritage that was ravaged — it might have desiccated the appeal of Hindu supremacism”.

Komireddi dispassionately deals with the violence the Hindutva supremacists engage in and the support it has garnered among a significant section of people — saying, for example, that “the barbarism in Ayodhya contained a self-empowering, even redemptive, message” and that “[t]he past, so many felt, had been avenged”. He emphasizes that the “promise of a violent release for the resentments and confusions incubated by Hindus’ unresolved feelings about their history... gave Hindu nationalism its visceral appeal”.

The Prologue begins on an autobiographical note, when the author says that “one of the first schools I attended... was really a madrassa, an Islamic seminary”, thanks to his father “who had deposited me at this madrassa... to inoculate me against sectarian temptations in later life”. He also mentions his friendship with Murad of Hyderabad, who came from a broken family headed by his mother as his father had left them. Murad is later falsely implicated in the 2007 Mecca Masjid bomb blast case like many other Muslim young men, is badly tortured and later decides to leave India. His story is a metaphor for our times. Underlining the plight of Murad and many like him, it shows how “India had irreparably smashed his innocent faith in it”.

In Part One, “Antecedents”, comprising four chapters, the author focuses on the Congress and its pitfalls. The first chapter, “Erosion”, begins with the “darkest months of dictatorial rule” of Indira Gandhi’s Emergency and Sanjay Gandhi’s emergence as “India’s Ceausescu”. It discusses how Nehru “strove to become a model of democratic leadership in a post-colonial landscape yielding rapidly to dictatorships”, talks about Shastri who “believed in... the higher ideals of the Republic”, or how “portraits of Indira Gandhi ornamented the homes of Indians of every faith” after the birth of Bangladesh; the chapter ends with the assassination of Indira Gandhi and the assumption of power by Rajiv Gandhi.

The remaining three chapters in this section, “Surrender”, “Decadence” and “Dissolution”, continue the Congress story, throw light on Rajiv’s projection as “Mr Clean”, his controversial statements about the anti-Sikh riots and the Bofors scandal which brought much ignominy to his regime; they talk about P.V. Narasimha Rao, the prime minister who “led India out of one of the worst economic crises in its history, opened it up to the world” yet “corrupted India’s democracy and crippled its commitment to secularism”. This part ends with Manmohan Singh’s reign as prime minister for 10 years.

Part Two, titled “India Under Narendra Modi”, begins with the chapter, “Cult”, dealing with Modi’s “progression up the ranks of the RSS” which “paralleled the gradual collapse of the edifice bequeathed by Nehru”, his birth in a family of lower-caste Gujaratis, his adoption of the “RSS as his family”, to his reign as the Gujarat chief minister replacing Keshubhai Patel, up to Godhra and the riots that took the “lives of at least a thousand Muslims, by a conservative estimate” on “Modi’s watch in 2002”. Komireddi discusses how the “interests of big business and bigotry fused and became indistinguishable in the ‘decisive’ personality of Modi”, the building of his cult and the BJP’s acquiescence to “Modi’s project to manufacture a post-secular heritage centred upon himself”. It also refers to a controversial interview taken by the social theorist and clinical psychologist, Ashis Nandy, when he was still an RSS pracharak, which showed his “authoritarian personality” and the way he was a “textbook case of a fascist”.

The remaining five chapters, “Chaos”, “Terror”, “Vanity”, “Seizure” and “Disunion”, discuss various aspects of his regime: demonetization, for example, which “exposed people in every corner of India to inexpressible hardship”, or the normalization of the “hunting of defenceless minorities”, or how “Modi [allegedly] follows dozens of accounts on social media that routinely dispense threats of rape against journalists and incite violence against Muslims and ideological dissenters”. We are also told how “[f]oreign policy fell prey to the prime minister’s vanity, and national interest became indistinguishable from narcissism”, or Modi’s subversion and seizure of “institutions indispensable to India’s existence as a secular democracy”. The last chapter underlines how, with the ascent of de facto Hindu supremacism under Modi, India “can no longer invoke the foundational arguments of the state to retain non-Hindus within its fold” and ends with a warning that “the dynamite of division that has always existed beneath the surface has never seemed so primed for detonation as it does under Modi”.

The book is a welcome addition to an analysis of post-Independence India, which, in the eyes of a commentator, has turned from a Republic of Hope to a Republic of Hate. But the writer should have avoided sensationalizing his text, which distracts any serious reader. The first chapter starts with: “Save your penis”, wherein the author wants to draw the reader’s attention to the forced sterilization programme undertaken during the Emergency.

Komireddi’s criticism of the Congress cannot be easily brushed aside. By appealing to save the idea of the republic, he indirectly acknowledges the Congress’s role in envisaging and institutionalizing the idea of India that is under threat today. But one gets an impression that he belongs to that group of commentators who consider the BJP and the Congress equally bad or who are not able to shed their ambivalence about the Congress.