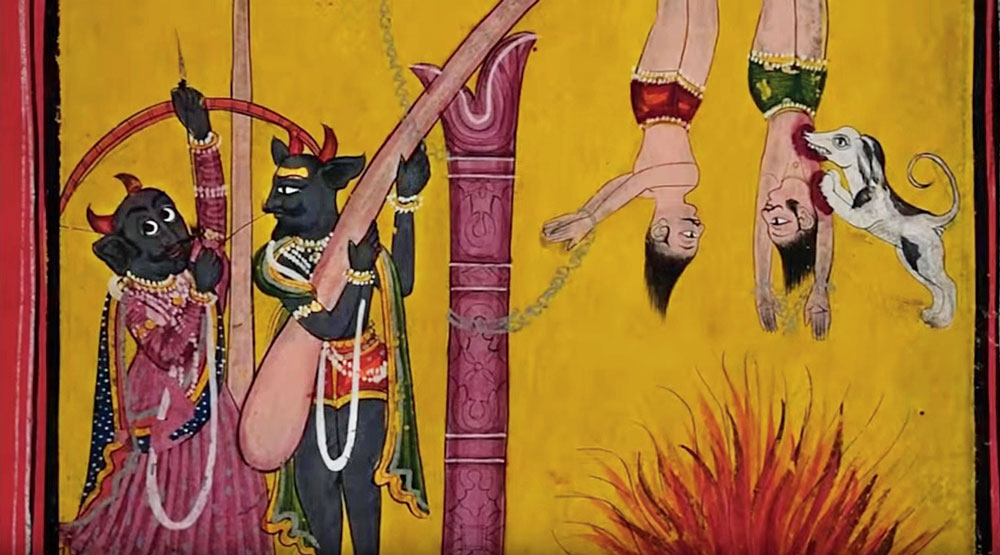 The Karni Bharni paintings from 18th and 19th century Jain manuscripts illustrate hell with its mindboggling variety of sufferings. Karni in Hindi means deed and bharni would translate as returns. The paintings depict stakes driven through human bodies; men with shikhas drowning in what looks like a small waterbody with eddies; dogs chasing men, feeding on their flesh. Journalist-turned-author Revati Laul used a couple of these for the online crowdfunding campaign for the recently published The Anatomy of Hate — her book on the 2002 Gujarat mayhem.

Contrary to what Laul’s “invisible” detractors might have imagined, this book is a telling of the riots from the point of view of the perpetrators. The three main characters, Suresh Jadeja, Dungar and Pranav, represent the Rioter, the Leader and the Voyeur, respectively.

But why lend the haters voice? Laul, who is back in Delhi after three years of being based in Ahmedabad, makes an impassioned case for the liberal reaching out to the illiberal. “The Sangh Parivar,” she argues, “draws its power from the collective guilt of the haters, whom they assuage, saying, ‘We understand what you felt then, what you feel now’.” All the while a large section of Indians, the so-called liberal section, continues to be in shock about the riots, even 16 years after it all happened.

Laul tells The Telegraph, “The way forward is to allow the mob to articulate its guilt and uncertainties. The book and the [confessionary] process it involved create that space. It is almost a Gandhian process.”

For all the demonic crimes it carefully indexes and describes, The Anatomy of Hate has a flowing, easy non-fiction narrative. It makes it difficult to remember the dogged research that has gone into it.

The book has been in the making these 14 years. The research, Laul says, entailed poring over gazettes, news reports, census figures, itinerant travels to each of the 18 districts of Gujarat that was acutely affected by the violence and meeting the accused from these places. There were 100 plus interviews, background checks, rejections, selections and eight drafts.

Laul does not claim her protagonist trio to be representative of the mob. She repeatedly says that these were the three stories she had intimate access to. They contain the kind of intimate detailing of hatred and vitriol she knows might unsettle but also provide a different way of seeing. She met Pranav by accident, at a harmony show, soon after the riots. Upper caste, educated, English-speaking, he used to watch his friends loot shops under the pretext of religious angst. What about Suresh and Dungar, did she seek them out too?

Suresh had been part of the crazed mob at Naroda Patiya, where 97 Muslims were killed on February 28, 2002. Laul, who was looking for someone through whom she could tell the Naroda story, had read media reports about him. She was curious about the matter-of-fact references to the Muslim wife of this man who had ripped open a pregnant Muslim woman and hoisted triumphantly the foetus. Laul says, “I was bewildered. No one had thought of asking her what it felt like to be married to such a man.”

While Pranav agreed to tell his story 10 years after their first meeting, Laul got most of Suresh’s story from his wife Farzana, and also the people of Chharanagar and Naroda Patiya he grew up with. He was in jail post riots but used his parole time to abuse and violate her till she was nearly broken. Did Laul interview Suresh too?

She replies, “I went to see him in his Chharanagar home once, when he was on furlough. He turned up in his underwear with a menacing air. The conversation started and I let down my guard when he lunged from his seat, clutched me by the throat and hit me across the face.” A blood vessel burst in her eye, as he pinned her down and continued to kick her. Nearly a hundred people crowded around the house and watched, till a momentary distraction caused by Suresh’s son’s feeble attempt to intervene gave Laul the opportunity to run to safety.

Laul met Dungar through a source. She knew his backstory, that he had torched several houses. But when he opened up to her, she couldn’t help asking why he was telling her all this. After all, he had fought very hard to get out of jail. Laul says, “Dungar had enough guilt in him to want to talk. He told me, ‘I don’t want my kids to grow up not knowing the guilt and the self-loathing that I have had to go through’.”

There were other people, other stories that Laul pursued. Some said “no” outright, others were still fighting cases, and some others spoke in part and then backed out. One man told her over a plate of pakodas that he had killed 10 people, sent her a Facebook friend request and then disappeared into thin air.

There were other kinds of impediments. Laul got sinister calls and had a feeling she was being followed, but the main adversity she faced and struggled with was financial. She says, “I applied to every possible fellowship and foundation that commits to ideas of democracy and secularism and says they are funding writers especially for projects that have to do with keeping democracy alive. I was rejected by one and all. No one said outright they had a problem with the content.” She adds quietly, “That is also how the powers that be operate.”

Finally, she decided to crowdfund the book. She chose an Indian company, designed the campaign, raised her target amount in 15 days — the campaign was to run for 45 — and turned away contributions thereafter. And then it happened. The site was trolled and a co-founder informed Laul that her campaign would be removed from all their social media platforms. One of the site funders had apparently threatened to pull the plug.

Laul first went to Gujarat as a journalist in 2003, to report. Is there something she sees differently now, something her 2003 self did not see? She replies: “I went there thinking these are vengeful people unlike me. Now I know that I am equally part of this matrix that polarises the liberal from the illiberal very sharply. I know that in order for the illiberal to be less illiberal, there has to be more than handwringing. Instead of looking at those we perceive to be stuck in a dark well and ridiculing them, we must see that the onus is on us — those who are outside the well to throw them a rope.”