Roots of the poison 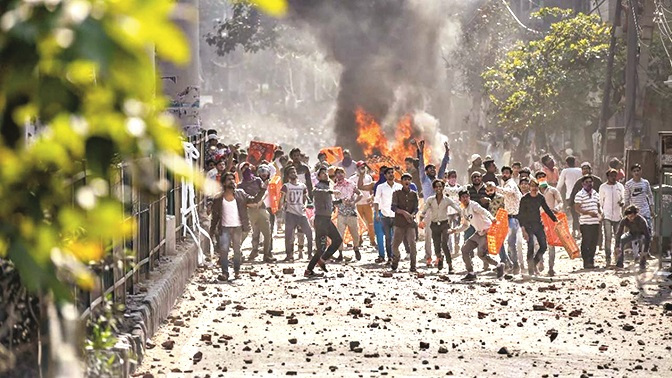 Contrary to the popular discourse of State monopoly over violence, the implications of collective violence on social interactions have been critical and dissociative in nature. Violence — direct and structural — induced by fear, hatred and extreme polarization often uses multiple values (religion, identity, ideology or language) as instruments of legitimization. In an otherwise pluralistic Indian society, collective violence, in its multiple forms and shades, not only dilutes the very essence of democratic values but also forces the members of the state to live in constant fear. This anxiety and extreme polarization are products of manufactured collective violence. Attempts towards an effective engagement through negotiations and dialogues hold the key to their resolution.

“Consistent and reflective dialogues between polarized citizens in order to heal past wounds of collective violence” is how the blurb of the new book by Rudolf C. Heredia describes the need for working towards desired peace in India. The book is divided into eight parts arranged thematically, starting with, what the author writes is the “betrayal of promises and hopes” and, subsequently, engaging with the very process of religious violence in contemporary India. It highlights the major processes that are involved in collective violence and concludes with the normative and the much-desired aspects of bridging the communal fault lines to offer a healing touch to Indian society. In the process of highlighting the nature of hate and collective violence prevalent in India, Heredia mostly reflects on Hindutva politics, attributing it as a major source of polarization in social interactions. A section in the book, “Religionizing violence”, is a good attempt by the author to make sense of the violent aspects in various religions. Heredia’s brief engagements with Hinduism and Hindutva politics, Christianity, Islam and, more importantly, Buddhism offer critical insights into understanding the paradoxical interactions of violence between the spiritual and the practical aspects of religion in India. At the same time, partial mentions of Jawaharlal Nehru’s vision of pluralism, Rabindranah Tagore’s humanism, M.K. Gandhi’s swaraj and B.R. Ambedkar’s republic as ideal models to minimize the risks of violence could have been instrumental in fostering a more detailed engagement reflecting on the commonalities and differences among these ideas.

Reading the book gives one the impression that Heredia is making a sincere attempt “to bring a moral conscience to the social sciences, and scholarly rigor to social activism”. The author suggests a return to the Gandhian ideas of ahimsa (non-violence and compassion) as a way forward for the “fraying fabric of Indian society”. Drawing on Gandhi’s ideas, the book stresses on unconditional dialogues and negotiations, which hardly find any mention in the contemporary social discourses. One can, however, add to Heredia’s suggestions. Ideally, engagement with conflicts, contrary to the indifferences that we witness, is a prerequisite for a process of negotiation.

A 370-page-long book with scholarly citations towards the end, meticulous indexing by the publisher, and examining a critical socio-political issue of our times — collective violence — this work, overall, is a good read. However, the communal fault lines, a major source of collective violence, should not have been limited to Hindutva politics only. This becomes even more important at a time when politics has been reduced to electoral losses and gains and when religion is being used as an instrument for furthering electoral interests and assertions of identity to dilute the very essence of pluralism. A deeper critical analysis of the very process of interactions among religion, electoral politics, and collective violence would have strengthened the content of the book.