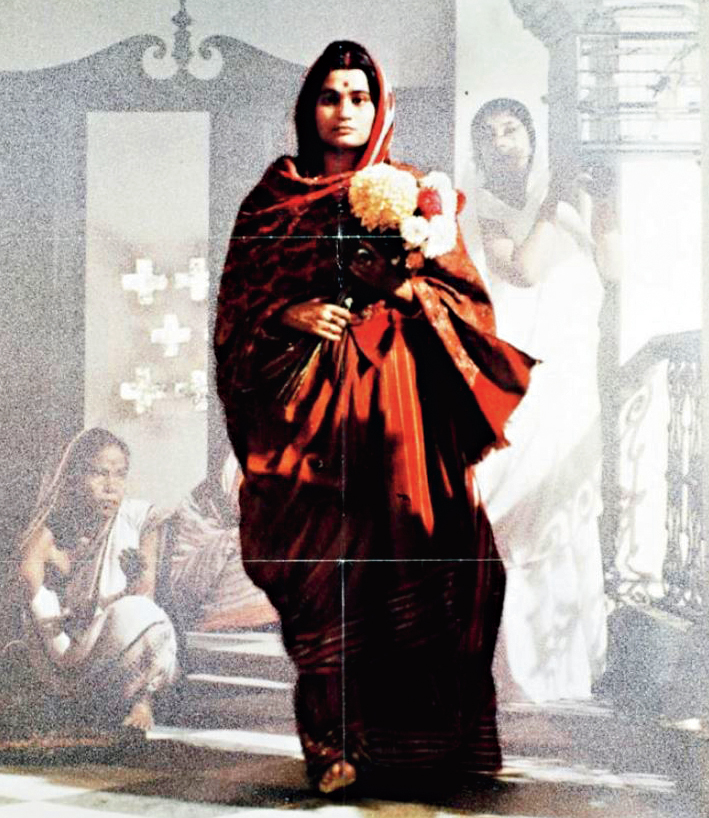 Chakraborty illustrates through her reading of Rabindranath Tagore’s Ghare Baire (poster above), the construction of the “nation as mother”
Picture source: Wikimedia Commons
Sutanuka Ghosh   |   Published 02.08.19, 11:16 AM

The Refugee Woman: Partition of Bengal, Gender, and the Political has made a timely and significant intervention in Partition Studies. In this monograph, Paulomi Chakraborty has consciously steered away from the current academic engagement with the oral history of the Partition. While oral history projects are extremely important in creating repositories of personal memories and histories that are liable to be lost and/or elided, Chakraborty has chosen to work with long narratives — two novels and a film — “to explore the connection between the ordinary, banal, normal political world and an instance of extraordinary violence, the Partition.” The book seeks to establish that there is a definite continuum between what Chakraborty calls the “everyday world” after Dorothy E. Smith, and the “extraordinary historical times” of the Partition that can be profitably traced through the lives of refugee women.

Consequently, Chakraborty examines the texts to firmly situate Partition within a historical paradigm of the “everyday”, as opposed to reading it as an aberration — “madness”. She achieves this objective by historicizing the category of “women” — caste-Hindu, Bengali middle-class women — operating in the interstices between the binaries of “woman as sign” and “woman as subject”. Her book argues that the violence of metaphor-formation — woman signifying the nation — emerging from the anti-colonial cultural nationalism in nineteenth century Bengal, spills over from the everyday to create the paradigm that informs the extraordinary violence of Partition. The first chapter is devoted to charting the historical trajectory of the representation of woman as a category — as a sign of the nation and the site of nation building negotiations — in dominant political discourses in Bengal from the late nineteenth century to Partition. While multiple readings of the woman as a sign prevailed in nineteenth and twentieth century Bengal, Chakraborty illustrates through her reading of Bankim Chandra Chattopadhyay’s Anandamath, Rabindranath Tagore’s Ghare Baire and Aurobindo’s letter to his wife, the construction and popular currency of the powerful iconography of the “nation as mother”, with the sons being enjoined to liberate the mother. Women’s agency could only be demonstrated through the act of producing and reproducing the nation. While Rabindranath, unlike Bankim Chandra and Aurobindo, had come to be critical of the deification of the nation by 1915, and therefore of the deployment of “woman as sign”, in Ghare Baire he is unable to imagine the woman as a political subject.

In the core chapters, Chakraborty explores how Jyotirmoyee Devi’s Epar Ganga, Opar Ganga, Ritwik Ghatak’s Meghe Dhaka Tara and Sabitri Roy’s Swaralipi can be read as creatively and critically intervening to counter the violent politics of gendered metaphor-formation. Analysing the narrative silence as well as the silence of the protagonist, Sutara, in Jyotirmoyee Devi’s novel, Chakraborty astutely observes that the truth of rape is irrelevant in the Brahminical worldview because rape is not regarded as male violence on the female body but the loss of sexual chastity of a woman. Epar Ganga critiques the cultural definition of rape and how a woman is judged for being vulnerable to the breach of the boundaries of her body. In Ghatak’s film, Chakraborty submits that Nita, the individual refugee woman who also represents the collective, becomes the sign for archetypal sacrificial motherhood. Nita’s eventual death is the ritual deconsecration where her body is consumed by her symbolic motherhood. Last of all, after clearly forbearing from suggesting any linear narrative of progress, Chakraborty reads Sabitri Roy’s Swaralipi as a text that explores the possibility of imagining, in the context of the Communist movement, “the signifier woman as a political subject constituting the collective”.

The Refugee Woman: Partition Of Bengal, Gender, And The Political By Paulomi Chakraborty, Oxford, Rs 1,195