Advertisement
Home / Culture / Books / An offer and a gentleman

An offer and a gentleman

‘Just that the more guys I meet, the more I realise that none of them will ever cut it. Dad set my standards for men too damn high’ 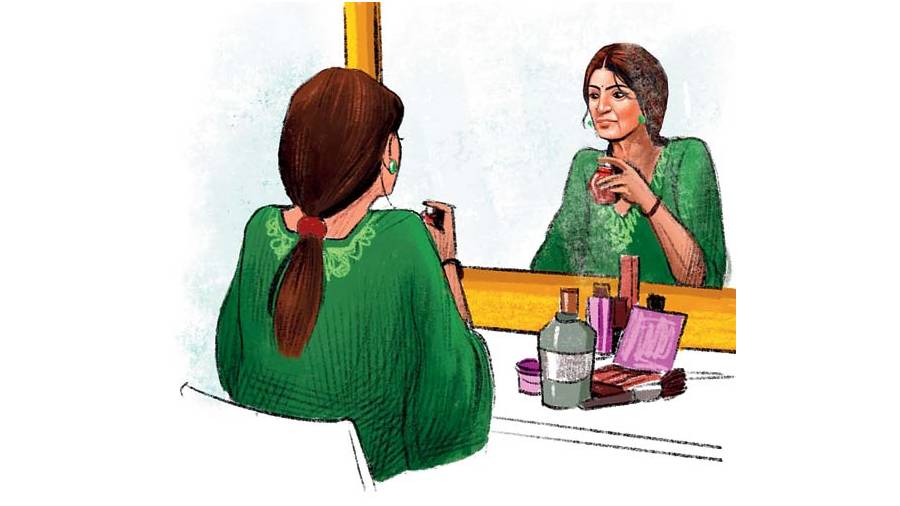 Recap: Saahil swaps texts with Seher and then dips into memories.

Zaara watched from the threshold as her mother spritzed herself with perfume before her gilt-edged mirror. It had once stood proud amidst a row of closets in a walk-in-wardrobe but was now crammed, pitifully, against the window and the bed. She marvelled in silence at the way Raahi went about dressing, without once pausing to grieve over the shabby crack in the wall behind the mirror, the honking from Bombay’s streets or the unmistakable smell of mutton wafting up through the vents from the Gurus’ home. Raahi, somehow, managed to maintain the same queen-like composure she had while dressing in their home in Mayfair, as she put on one thing after another, dressing with as much care for their tacky new neighbours as she did, once, for the Prince of Wales. Perfume, spritzed. Heels, slipped on. Watch, strapped on. Lipstick. A flick of mascara. And a slight pinch of her cheeks for natural colour.

The mechanics of the ritual soothed Zaara, who had been watching it since she was a knee-high helper scampering about Raahi’s wardrobe, eager to fetch her blush brushes and sticks of gum as Raahi went from mamma to movie-star in a matter of minutes.

Now, as Raahi drew herself up, magnificent in her olive dress and emerald earrings, too magnificent for this room, without one wrinkle of dissatisfaction marring her regal face, Zaara exhaled, embarrassed at her temper tantrum that afternoon.

She walked into the room and put her chin on her mother’s shoulder, getting a whiff of wild bluebells as she admired the fall of her silk kaftan dress. “You look lovely ma,” she said. Then with a chuckle, she added, “Poor Mr Guru may need to retire early tonight.”

Raahi smiled at her daughter, glad to see her in a good mood.

“You put on a dress,” she observed. “I thought you were going to revolt by donning the the most ripped jeans and the shabbiest hoodie in your closet.”

“I considered it,” Zaara said, with a glint in her eye. “How’d you guess?”

“It’s what I would have done.”

Zaara grinned at her mum. Then she shook her head. “I’m angry and I want to punish someone,” she confessed, “but it isn’t you.”

Raahi’s eyebrows furrowed together in concern.

“Don’t tell me you’ve started to think badly of your father too.”

“Far from it. I miss him more than ever. I’m only just realising how well he took care of us without ever advertising it.” Zaara’s voice caught in her throat. “I feel grateful. For him and you.”

She stopped then, because she didn’t want to redo her mascara. Raahi’s nose had gone pink too. Her mother blinked twice and then looked to the ceiling, squinching her face together to keep snot and tears from ruining it.

“We should be happy. We’re lucky, as you said, to have had Maahir,” Raahi powdered her nose, turning it to a soft cream again, ‘I only hope you and Seher are as lucky as I was.” She laughed, dabbing her eyes with a tissue. “Just don’t tell your sister I said so.”

“I don’t think anyone in my generation is going to be as lucky as you were Ma.”

Raahi paused her powdering to look at her daughter, a little surprised by this confession from the daughter she had thought to be a romantic.

“Just that the more guys I meet, the more I realise that none of them will ever cut it. Dad set my standards for men too damn high.”

“But you’ve only just come back from college,” Raahi said with a laugh. “You haven’t even met any men yet.”

“You used to swear by Saahil,” Zaara said.

“Has he still not called?”

Zaara shook her head, once.

“Then we must forget about him,” Raahi said, buttoning her purse and holding her arm to her daughter. “And enjoy the evening with our new friends.”

Zaara hesitated but then, she nodded. The only thing to do now was to say yes, with a pleasant smile, for the sake of her family, and settle into their new lives with as much grace as her mother had taught her.

But it seemed like the moment she had decided to behave, the universe decided to test her patience. It was almost as though whoever was writing the story of Zaara’s life heard her private promise to be gracious and generous, had laughed ‘Oh yes?’ in reckless response.

From the very moment the door swung open, Zaara saw reason to take offense. The other Pandits were a little taken aback too, by just how spacious, how airy, and how wonderfully well-designed Mr Jaspal Singh Guru’s home was. There wasn’t a single ugly arch, column or chandelier here.

A skittish young maid led them through a long marble corridor to a large marble drawing room and informed them that saab and memsahib would be with them in a moment, giving all three women to take in, with shock, the fact that the Gurus’ apartment was the understated, elegant affair that theirs should have been.

“We have the same square footage don’t we?” Zaara asked, in indignation.

“I’m fairly certain we do,” Raahi responded. “At least in the layout of the first two floors. The Gurus have an extra upstairs balcony but... the layout is the same”

Seher widened her eyes in warning. “Let’s leave it for now, I think memsahib is here.”

And she certainly was. Neelam Singh Guru sauntered into her very large marble living room on snakeskin stilettos. Zaara nearly gasped. Neelam Guru’s heavy, pear-shaped body had been squeezed into a black dress with open-mouthed red tigers printed on it in tiles. A belt with a gold Gucci buckle cinched her waist so that there was a tiger roaring from each breast and two tigers roaring from her belly.

“Welcome,” Neelam said, spreading her arms, causing the red cats to expand. “We’re so glad to have you over tonight. Jaspal will be here in a moment.”

And she sat down on her chaise lounge, with one leg casually crossed over another, and smiled at them opaquely. Raahi’s eyes widened in surprise. Was their hostess so ill-bred that she wouldn’t see that her guests were seated first? Zaara looked at her mother meaningfully, to signify to her that they should quit the room and this evening, now. But Seher, determined for nothing dramatic or gossip-worthy to occur, took the martini glass the maid had offered her and sat down opposite Neelam. Raahi and Zaara had no choice but to follow suit.

“You will like that Seher,” Neelam said, “It’s gin and elderflower.”

Seher looked surprised. “How did you know?”

“I run an exclusive PR agency for a handful of very prestigious celebrities,” she said with a smile.

“It’s my job to know the little preferences of the important people I meet.”

Then Neelam turned to Zaara with a knowing smile, “Like I know just how much you enjoy the dirty martini at Annabel’s, London.”

And she laughed suggestively. Like they were girls, in on each other’s secrets. Like she knew about Zaara’s Friday night escapades and forgave them.

Zaara frowned. “So your business is to find out other people’s business?”

“That’s one way to put it,” Neelam Singh said with a laugh. “But I need to know what the whole picture of my client is to be able to polish away the less... palatable aspects of their lives.”

“But we’re not your clients,” Zaara pointed out.

“Yet.” Neelam smiled coyly, but they were saved at that moment from finding out what exactly she meant by that by Jaspal entering the room in a satin black shirt, his forehead shining with sweat and his chin covered in little white bandages.

“Shaving accident,” he explained, when he saw the women’s eyes widen in response. “I think I got a little nervous tonight.” His wife’s smile tightened but Jaspal continued, oblivious and laughing. “Lucky that Mehra here was around to help!”

And a lean man, with salt-and-pepper hair but a more youthful face than Jaspal Singh Guru strode down the stairs in a crushed linen shirt and beige trousers.

“Hello,” Raahi said to him, in obvious relief. The girls relaxed too. From the quiet, confident bearing of the man, from the way he nodded to each of them, from the understated linen of his shirt and the refreshing waft of his cologne, they knew that they were finally in the company of someone who understood the world they came from, its social codes that dictated quiet elegance as a compulsory and looked on the hunger for fame with contempt.

“Hello,” he said, with a good-natured smile. “Sorry, we kept you waiting. Jaspal decided to attempt a French beard at the last moment. We were trying for Johnny Depp in Tourist but it turned out to be more Sweeney Todd than either of us expected.”

Raahi laughed, charmed. Seher smiled too. Zaara tried to rearrange her expression into something less pissed off.

“Thank God Mehra still practices,” Jaspal continued, indicating the stitches on his face. “Or I’d be in the emergency room now, instead of sitting down to dinner with... you.”

His gaze shone on Raahi with a little too much meaning.

“Ah well,” Raahi smiled and turned to the gentleman beside him, “It’s good to meet you Mr Mehra. These are my daughters. Seher and Zaara.”

“And we’re going to make them famous with a capital F,” Neelam Singh announced, raising her glass. None of the women at the table rose their glasses in response. Mehra’s eyebrows lifted ever so slightly.

“What?” Neelam asked, confused by their frozen expressions but still enthusiastic “By the time I’m done, you two are going to be better known than anyone in Bollywood!”

“Just like their mother,” Jaspal added. “Neelu can turn you into the Kardashians of India!”

“My daughters aren’t interested in acting,” Raahi said when she had recovered her voice. But the impact of this was diluted by the maid coming in just then to announce that dinner was served.

“Come!” Neelu waved her hand and flounced out of the room, expecting the rest of the party to follow her like sheep.

Jaspal was too busy smiling at Raahi to notice that his wife was being rude. Seher noticed, however, that the corners of Mehra’s mouth had turned upwards, in an almost indulgent smile at his friend’s ill-mannered wife. Yes, he definitely belonged to their world.

Perhaps this dinner wouldn’t be so intolerable after all.

This is the 19th episode of Riva Razdan’s serialised novel Nonsense and Respectability,published every Sunday 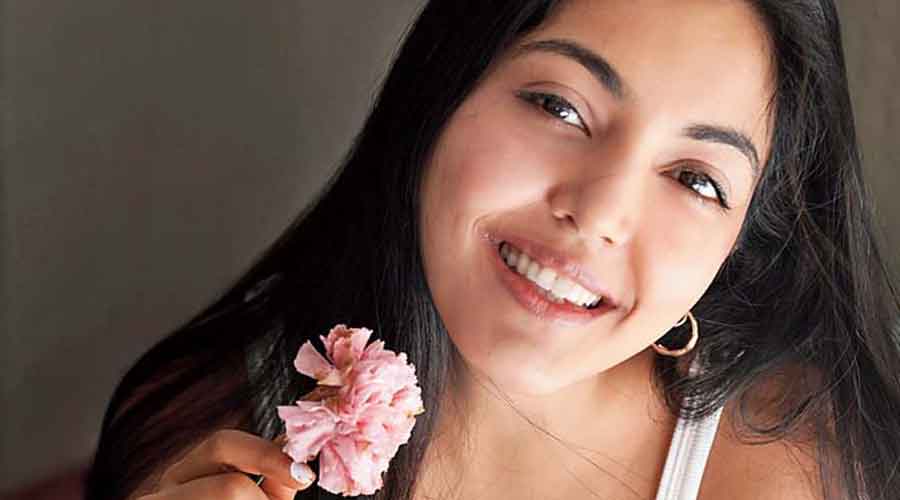