Advertisement
Home / Culture / Books / Delving into the dark side of the mind: Initiating discussions on avenues like crime, psychology and society

Delving into the dark side of the mind: Initiating discussions on avenues like crime, psychology and society 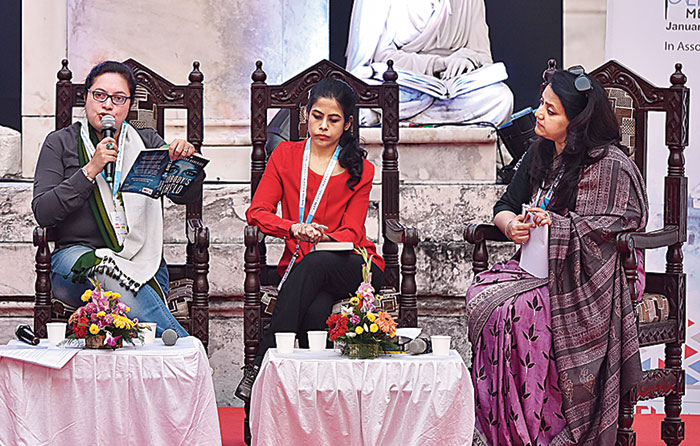 The darkness of the mind and evil fascinates thriller writer Kanchana Banerjee. In her new psychological thriller Nobody’s Child, Banerjee explores the same by setting her plot against the pitfalls of the celebrity circus. Following her session Dark Side of the Mind at the Western Quandrangle, Victoria Memorial, as a part of the Tata Steel Kolkata Literary Meet, in association with The Telegraph and Victoria Memorial Hall, on January 22, The Telegraph sat down for a chat with the author.

Tell us about your journey as a writer...

I have been writing since almost 18-19 years now for various publications. So as a writer, I think becoming the author is always the final destination. It was always my plan. I went to Gurgaon in December 2013 and a chance meeting with a completely unknown person called Kiran was the start of it all. We just clicked and started conducting writing workshops in Gurgaon and in the course of the writing workshop, I began to meet other authors, other literary agents, senior editors and I just got swept in that direction and the idea of the story came to me and I began writing.

How did you come up with the idea of the plot for Nobody’s Child?

The basic idea of Asavri being shunned by her husband on the first night of her marriage, when she tells him that she has had pre-marital sex when she got drunk in college, came from a short letter I read at an agony aunt column way back in 2002. And the letter had really struck a chord. And at that time, I knew I am going to use this as the basic plot of my story. Also, as a writer, I keep observing a lot of things. And that time I came across news of a young woman loitering on the streets of Mumbai in very terrible condition and was later discovered to be a supermodel. So that struck a chord and I made that incident as the starting point of the novel that Asavri is found loitering the streets. So it is not just the plot as past experiences, observing and a lot of things go into the writing of a book. All that soaks into your consciousness while writing.

How much is the narrative structure important to you as a writer?

It is very important for me. I want to challenge myself and push my boundaries as a writer. Writing Nobody’s Child was a Herculean task because there are three characters who speak in the book and the protagonist is not one of them — they are Avniel, Kamini and Monty. So we get to know Asavri’s story through them and all three are talking in simple past and simple present, telling the backstory and the present story. It was crazy plotting out the chapters. All the three narratives were moving together, and they are all telling the story of Asavri, whereas she is not speaking. She speaks only in the last chapter. But I enjoy doing that. I like pushing myself into different narrative structures. I got the first taste of this from Gillian Flynn’s Gone Girl. At the base of it is a very simple story but it is the narrative structure that makes it different.