‘Jawahar will be my successor’: Mahatma Gandhi

"Once I am gone, he will do what I am doing now. Then he will speak my language too," said Mahatma Gandhi in his speech to the AICC on January 25, 1942 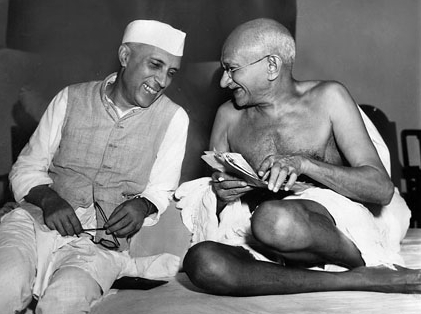 The background of this speech is the CWC resolution passed in its meeting on 30 December, 1941. The British government had announced India’s participation in World War II, without consulting the Indian leaders, and more importantly without committing itself to India’s independence after the war. There was widespread resentment and the people were restive with the ‘individual satyagraha’. The Bardoli resolution reflected the popular mood and Congress’s response to it. The resolution also sought to finetune the ‘doctrinaire insistence on nonviolence’ both for the Congress party and the future government of India. Nehru was supposed to be main brain behind this resolution and defended it vigorously at the Wardha meeting of AICC in January 1942, sharply attacking its opponents. So sharp was Nehru’s attack on absolute reliance on nonviolence even as an instrument of state policy, that it left Rajendra Prasad quite ‘upset’ as noted by Gandhiji in this speech.

Given this context, the following speech of Gandhiji containing his unequivocal declaration—‘Jawahar will be my successor’—and also his confidence—‘Once I am gone, he will do what I am doing now. Then he will speak my language too’—becomes most significant and poignant.

That nothing much is to be expected from the Government is probably too true. Only the resolution puts the Congress right with the expectant world by debunking the criticism that the Congress is an organization of doctrinaires. And since there is a party in the Congress ready to welcome an honourable offer that will satisfy the rigidest test, it is as well that the resolution has accommodated this party. It has to be seen which group ultimately pulls the others. Whichever group wins, how can it harm us? We need have no objection.

How does this resolution leave scope for Rajendra Babu? We have contemplated some step for the future, which upsets him. But we are not here to decide what we shall do in the future. When India becomes free, the resolution says, we can defend ourselves with arms. If we wish to help China and Russia, the resolution leaves us free to do so. We have no ill will against the Britishers, and for that matter against Germans, Italians or Japanese. How then can we have an ill will against China and Russia? The Russians have created a brave new thing. But I have my doubts as to how long they can defend their freedom in this manner. Experience tells us that any great work founded on force does not last. The Chinese sail in the same boat with us. It is a vast country and I am proud of it. I would like all these nations to be at peace with one another. If China seeks to defend herself with arms, she will have to become like Japan. She will have to do everything that Hitler and Mussolini are doing. I would like to think that when the occasion arises India would defend herself through nonviolence and thus be a messenger of peace to the whole world. Jawahar will also then work for it—not for war. Rajendra Babu can therefore support this resolution. As a political [weapon] nonviolence is no small thing; it can bring about all these results.

I wish to stop you from dividing the house by seeking a vote on this resolution. I do not want the Congress to look ridiculous in the eyes of the world. We have not a clean slate to write on. Our leaders have taken a step which has produced worldwide reactions. To alter the resolution out of shape is to ignore these. It would be unwise to change the policy adopted by the Working Committee. It will make the Congress appear ridiculous before the world. The world has a right to expect that the Working Committee’s policy will be endorsed by the AICC. We have no valid grounds to alter it. To those who want to catch up with me and introduce a new resolution for preserving ahimsa, I would say: ‘Yes, it does bring you credit. If you have chewed and digested ahimsa, I shall follow in your footsteps and so will Maulana Saheb. But I see no such evidence in you. If you bring another resolution merely to retain my leadership, it will be a foolish step. In fact, it will amount to violence. Therefore you should accept this resolution, however imperfect it may be.’

Do not please go away with the idea that there is a rift in the Congress lute. As Maulana Saheb has said, the Working Committee has functioned like members of a happy family. Somebody suggested that Pandit Jawaharlal and I were estranged. This is baseless. Jawaharlal has been resisting me ever since he fell into my net. You cannot divide water by repeatedly striking it with a stick. It is just as difficult to divide us. I have always said that not Rajaji, nor Sardar Vallabhbhai, but Jawaharlal will be my successor. He says whatever is uppermost in his mind, but he always does what I want. When I am gone he will do what I am doing now. Then he will speak my language too. After all he was born in this land. Every day he learns some new thing. He fights with me because I am there. Whom will he fight when I am gone? And who will suffer his fighting? Ultimately, he will have to speak my language. Even if this does not happen, I would at least die with this faith.

There is another reason why this resolution should be supported. (By chance this resolution has) become a mirror of the Congress in which all groups can see themselves. I can see my own reflection, and so can Rajendra Babu, Badshah Khan, Sardar and the rest. Those who have spent a lifetime in cursing the Government as also those who wish to compromise with the Government can see their own reflections in this mirror.

Maulana Saheb has not properly described how this resolution was framed. This is not the resolution as drafted by Jawaharlal. His draft has been materially amended. Rajaji also had a hand in revising it. People have an erroneous impression about Jawaharlal that he never budges from his views. Today at least he cannot get that certificate. He argues vehemently, but when the time for action arrives, he can make considerable compromises. This resolution is a product of a general consensus. The views of all the members of the Working Committee are reflected in this resolution. Like khichri it contains pulses, rice, salt, chilli and spices. Maulana Saheb has already explained the different points of view within the Working Committee. We have many groups amongst us. One is represented by Jawaharlal. His opposition to participation in the war effort is almost as strong as mine, though his reasons are different. He will not concede that he has retraced his steps in consenting to this resolution. But he himself will agree that the Rajaji group can take a different view of this resolution. The original draft had left no room for Rajaji and his followers to function. Rajaji would like to participate in the war effort if the Government accepted the conditions laid down by the Congress. So he has opened a tiny window for himself. Through this window Rajaji will try to pull Jawahar towards him and Jawahar will pull in the opposite direction. It is no longer open to the Government and the Congress critics to say that the Congress has banged the door against negotiation on the doctrinaire ground of nonviolence. The resolution throws on the Government the entire burden of wooing the Congress by meeting its legitimate demands and securing its participation in the war effort.

Who is Bharat Mata? Writings by and on Jawaharlal Nehru, edited by Purushottam Agrawal. Excerpted with permission from Speaking Tiger