Told in curious and simple prose, this novel is wildly reminiscent of a contemplative Douglas Adams pondering over an Orwellian present 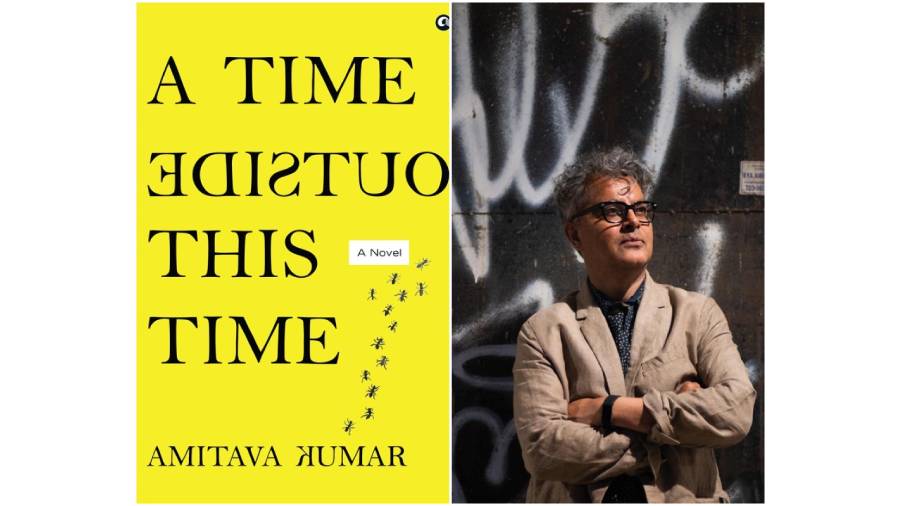 A wonderfully honest read of recent time would be Amitava Kumar’s A Time Outside This Time (Aleph; Rs 699). Told in curious and simple prose, this novel is wildly reminiscent of a contemplative Douglas Adams pondering over an Orwellian present. Kumar is a Guggenheim fellow and a professor of English at Vassar College with books like Writing Badly is Easy and The Lovers in his oeuvre.

In this book, Satya is an Indian writer based in New York, enjoying a residency for artists in Italy. His wife Vani and daughter Piya await his return home as he narrates and is mesmerised by the web of fake news building around the world at break-neck speed. Caught between Trump and Modi, his resilient pursuit of social norms as defined in a post-truth world results in him building a plotline for his book. As the thin line between truth and lie starts to vanish, it soon becomes barely discernible from fiction.

Lamenting about the state of affairs and the media narratives which could well be fictional stories, there is incredulity accompanying his keen observations. He draws parallels between the world outside and the novel that begins to gently take shape in his mind. Commenting on the state of affairs, Satya wonders if the leaders of the country –– just like him –– cannot imagine ‘a time outside this time’. He writes:

“The most popular stories on Snopes.com:

Did Eleven U.S. Marines Give Their Lives This Week? [False]

Did a Principal Ban Candy Canes Because They Are Shaped Like Js for Jesus? [True]

Did a Brain-Eating Amoeba Kill a Woman Who Rinsed Her Sinuses with Tap Water? [True]

Did Miley Cyrus Tell Fans to Worship Satan if They Want to Be Rich and Famous? [False]

The list is fairly ridiculous. It reveals the low stakes in the battle for truth in our culture.”

Kumar’s novel comes with a wry sense of humour and readers are compelled to start wondering with Satya and question their own memory-making process. Satya decides that to make sense of the copious notes he had taken –– since Trump came to presidency to his days at the residency with the novel corona virus beginning to rear its fangs around the world –– he must go far back into his childhood. With a matter-of-fact style of storytelling, Satya remembers his childhood fraught with communal violence and thinks –– ‘I was trying to remember the earliest lies I was told about others and the stories I had invented about myself.’ In a seamless manner, Kumar’s own story becomes Satya’s story as he recounts his time as an author in New York.

There are little stories that make up this gigantically ambitious novel spanning across various parts of the world. There is Khalid Farooq whose tale moved Satya to provide financial help that was never returned. Instead what emerged were a few lies. There is an English professor Ghosh in Siliguri who thought of Hamlet on the death of a peasant leader. There is Vishal Kishore, a police officer in Calcutta who paves the way for the author’s research into someone named Avinash. And there is Gautam Sikdar, a popular TV journalist who was once married to his wife Vani. Through these various little stories, Kumar throws light upon different aspects of life and the presence of lies in those very spheres.

There is anecdotal history, the bizarre nature of data and dubious scientific research strewn across the book that has an undulating narrative. However, if for a second you feel yourself slipping away, you remember that there is some part of a loose thread that remains to be tied and you carry on. Pick up a copy to feel seen as familiar events around the world build into a narrative that is unique and personal to you. The gorgeous yellow cover, designed by the author himself, will lead you right to it.