In a classic concert, a few discordant strings 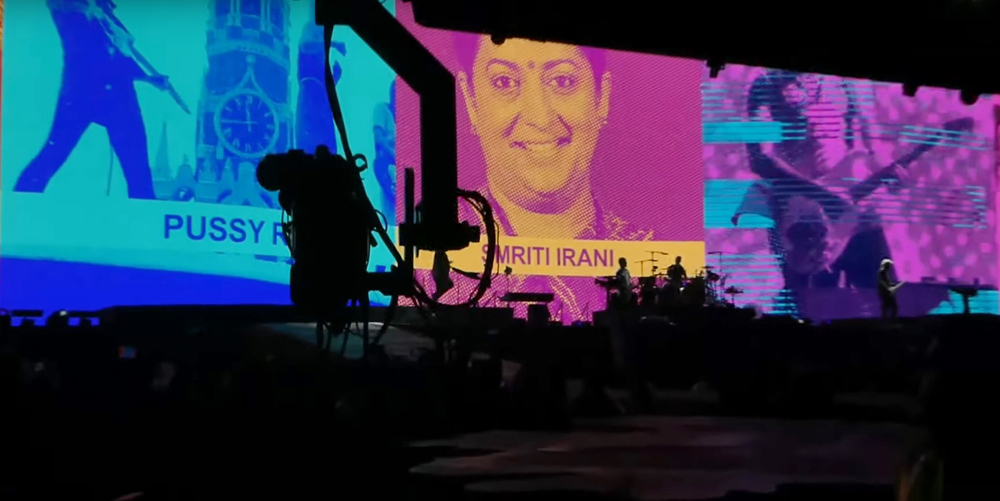 Staring at the stadium while the band played ‘Ultra violet’ — the third-last song of the concert, dedicated to women change-makers — was also a giant image of Union minister Smriti Irani
Sourced by The Telegraph
Sumit Bhattacharya   |   Published 21.12.19, 09:56 PM

Around the time Larry Mullen Jr started the gunfire-drum intro of Sunday Bloody Sunday at the D.Y. Patil Stadium in Navi Mumbai last Sunday, the Delhi Police were making the song real for the students protesting a law that is seen as a precursor to mass internment.

Sunday Bloody Sunday, from U2’s 1983 album War, is about British soldiers in 1972 in Northern Ireland shooting unarmed Catholic protesters who were demonstrating against internment — mass incarceration of people on suspicion of being militants. But it transcends its context: I can’t believe the news today/I can’t close my eyes and make it go away/How long, how long must we sing this song.

When the boys from Dublin played the song in Denver, Colorado, on November 8, 1987 — the day an Irish Republican Army bomb killed British military veterans on Remembrance Day — Bono had said onstage during the song: “F**k the revolution”. The band did not play Sunday Bloody Sunday for years after that, because they thought it had been “made real” by the bombing.

In Navi Mumbai, U2 featured in their slides women such as writer Arundhati Roy, lawyer Karuna Nundy, activist Ria Sharma, Muslim reformer Begum Rokeya (in whose name there is a small park in Calcutta where the Maa flyover ends in Park Circus), and journalists Gauri Lankesh and Rana Ayyub. And staring at the stadium while the band played Ultra violet — the third-last song of the concert, dedicated to women change-makers — was also a giant image of Union minister Smriti Irani.

It is unlikely the band or anyone in the stadium knew that the Delhi Police, controlled by the government Irani is part of, were playing their own version of Sunday Bloody Sunday. Cellphones and data were jammed — most probably because of thousands of Insta pictures going up of selfies — and U2 played non-stop with frenetic energy and shades of improvisation that signalled they were feeling the high of rock ’n’ roll. But the sight of the minister was like U2 featuring Donald Trump’s counsellor Kellyanne Conway in the US.

U2 during the concert in Navi Mumbai last Sunday
(PTI photo)

Days before the Navi Mumbai concert, Bono had said in Manila, “...I understand that when progress is made, sometimes people make compromises for that progress. And I would just say, you can’t compromise on human rights. That’s my soft message to the President.” An Indian equivalent would have been if he had dedicated Mothers of the Disappeared — the haunting tune written for the association of mothers of Chile and Argentina whose children “disappeared” under dictatorships and as a punch at the Reagan administration’s support to such despots — to Kashmir, the land of “half-widows”. But that was not to be.

In the middle of Bad, the song U2 became global stars by playing an 11-plus-minute version of at Wembley in Live Aid 1985, Bono, one of the greatest voices of a generation, led the D.Y. Patil crowd into a chant: All we are saying, is give peace a chance.

All we are saying, is give peace a chance.

“What a country! What a welcome!... India,” Bono said at the beginning of Bad. In the outro to Beautiful Day, he said, “When women are safe in their homes, and walking the streets, that’s a beautiful day.” All of those words seemed to ricochet off the image of Smriti Irani.

The boys from Dublin evoke extreme reactions; many hate them, millions love them. Some see in them the vestiges of a romantic notion of music for change, others see remnants of the white man’s burden. I love their music, one of the soundtracks to my wonder years. The Edge’s turning the dotted-eighth delay into a painter’s brush was one of the reasons I picked up the guitar. But to see them feature a woman who embodies the popcorn nationalism that has brought India to an inflection point was a cruel reminder of U2’s popcorn activism.

The Left and the Right must work together to change the world, Bono declared, and the band’s rather incongruous collab with A.R. Rahman and his daughters was named after what Bono called India’s greatest gift to the world — Ahimsa.

As a fan, U2’s music in Navi Mumbai was spectacular, even better than the real thing. To see them feature Irani was a reminder of the pangs of growing up; like discovering as a child that my father was not literally the world’s tallest man, like reading about P.G. Wodehouse’s broadcast from Berlin during World War II.

‘One love’ cried fans as U2 wowed thousands