Between reality and fantasy

'The (in)Visible and The (un)Revealed: Inside the Secret Worlds of Kartick Chandra Pyne' brings together his artworks spanning over six decades 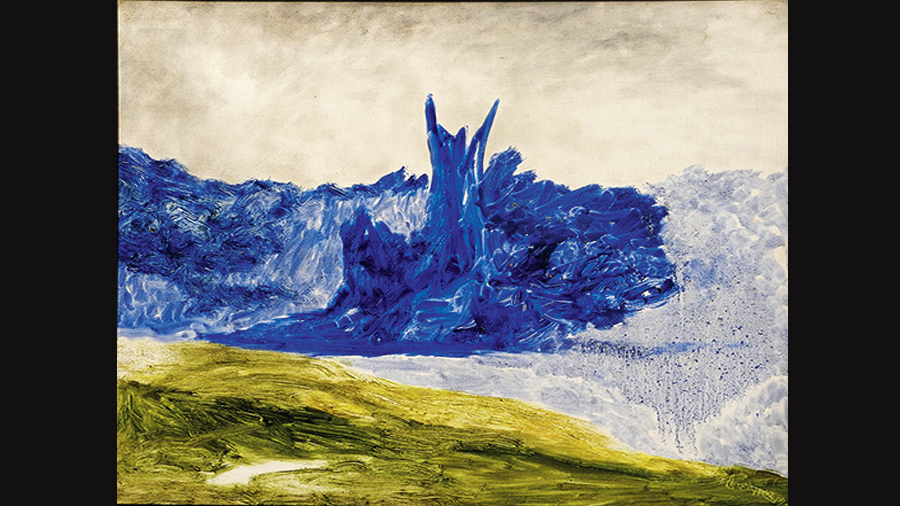 While  his contemporaries were experimenting with genres ranging from Cubism to Impressionism in the 1960s, Kartick Chandra Pyne was depicting a world beyond them. Through his surreal brushstrokes, he reconstructed reality, fusing indigenous Indian folk with modern art in his works where imagination is not constrained by the limitations of reality. The (in)Visible and The (un)Revealed: Inside the Secret Worlds of Kartick Chandra Pyne (till June 12 at Emami Art) brings together his artworks spanning over six decades. The exhibition chronicles the complexities of Pyne’s eclectic style, which, in spite of its fluidity, was firmly grounded in his academic training at the Government College of Art and Craft.

Thematically, his paintings were an attempt at exploring human stories, myth and cultures, religious fervour, animals and landscape. Suffused with a joyful palette, most of his figures float between reality and fantasy, memory and imagination and, at times, are charged with erotic vitality: this is especially true of his female nudes — a motif he returned to throughout his career. Hung up against a bright ultramarine wall, the works take on an even more unreal quality. Most striking among the pieces on display are Refugee Family, which bears a stark resemblance to the images of migrant labourers that have haunted us since last year, Village View, where the impact of Marc Chagall is writ large, and Waves (picture), are vibrant, alive, and writhing with energy. Another oil on canvas shows a man dragging a rickshaw as the passengers and an exhausted-looking horse observe him. By creating a silent dialogue between what essentially are two beasts of burden — human and animal — Pyne offers a subtle social commentary on labour even while retaining his colourful language.