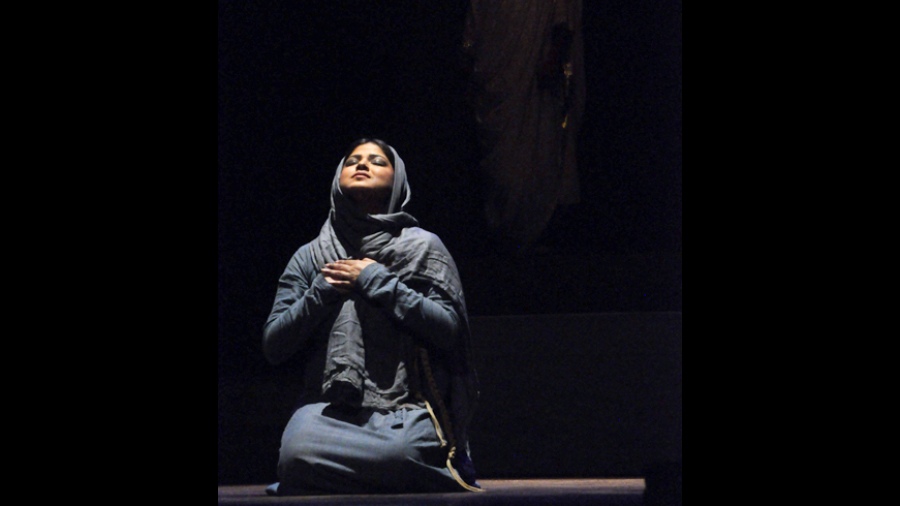 Bengali theatre is always happy to mine literary sources to find inspiration for new plays. Amidst the ongoing pandemic, three generations of playwrights have taken three distinctive approaches to adapting stories, old and new.

In Jadavpur Ramyani’s latest work, Barabba, the veteran thespian, Soumitra Basu, takes the road not taken and adapts a Biblical narrative. Besides occasional church dramas performed during Easter and Christmas, one rarely comes across a Bengali play based on a Biblical theme. Basu approaches the New Testament tale involving Barabbas — he was the Roman rebel who was released by Pontius Pilate while Jesus Christ was being crucified at Golgotha — with an emphasis on the relationship between the State and the masses. Basu, who also plays Herod’s emissary who convinces Pilate, takes a leaf out of the Greek chorus to portray a humongous mob that keeps intervening at crucial junctures. The suggestion of Greco-Roman architecture in the set and the use of period costumes help create the right ambience. The soundtrack, apparently lifted from the legendary Hollywood classics of the 1950s and 60s, also fits the bill. Mukesh Chakraborty gives his best shot in the lead role, while Debalina Chakraborty handles the passionate intensity of Marium, a follower of Christ, well.

Nandimukh’s Lanthan Saheber Bungalow is based on a Sunil Gangopadhyay story that focuses on a chance encounter between Charles Hamilton, an East India Company employee from early-19th century Yorkshire who refuses to leave his bungalow in Ibrahimpur pargana, and Dwarakanath Tagore, the new zamindar who takes over the middle Bengal region. Sounava Bose’s dramatisation adds considerable flesh to the original story. Hamilton’s attachment to his deceased wife (played sensitively by Sonali Chattopadhyay) is explored through dream sequences. The introduction of characters rooted in the soil and ones representing the new order underlined the dramatic tension. Using a Lalan Fakir number was a minor aberration. But the reference to Titu Mir’s armed rebellion to underscore religious syncretism in pre-colonial Bengal was a master stroke. Ashoke Chattopadhyay, the director, takes assistance from the veteran thespian, Asit Basu, to edit and design the production. Basu, who also plays the lead role with effortless subtlety, easily steals the march over a set of mediocre actors. Tania Sarkar also impresses.

Shyambazar Natyacharcha Kendra’s Telescope is a short-length gem that should travel miles. Based on a Madhusudan Mukhopadhyay story that records a suburban girl’s fascination with the telescope and the heavenly bodies, which she imbibed from her father, this shortlength work, dramatised and directed by the young Sunny Chatterjee, makes an earnest effort to work out the symbolical undertones inherent in the story and marvels the audience. Aided by a visually arresting, yet simple, stage design and a complementary lighting scheme, Telescope glides delicately on the melody of Bengali films from the 1950s. That lower-middle class existence could crave a magical dialogue with the outer world has never been portrayed so sensitively in recent years. Jogmaya Basu, an immensely talented actress, plays the lead with an eye for all the twists and turns of this richly layered drama. Prity Karmakar provides able support in the mother’s part. Samaresh Basu, whose ability to switch roles at the drop of a hat was explored by the director, makes an impression in all three cameos.