Dulcet notes played on the mandolin across centuries

MUSIC: The Victoria Memorial with its majestic grandeur was an apt venue for such an expedition 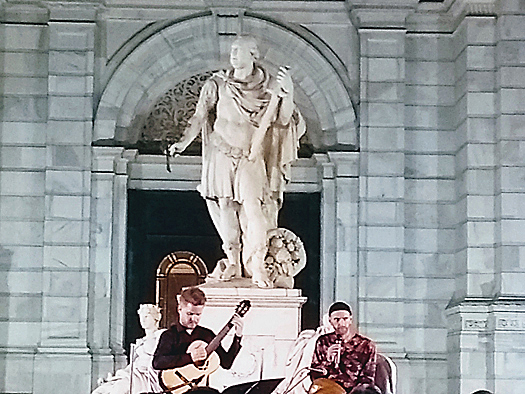 To encompass three centuries of music in one hour is a feat in itself, and the concert, Journey through Italy: The Golden Age of the Mandolin, lived up to expectations. Organized by the Calcutta Classical Guitar Society in association with the Italian Embassy Cultural Centre on February 28, the programme championed the mandolin as a symbol of Italian heritage by showing its journey through different landscapes and incorporating different styles. The Victoria Memorial with its majestic grandeur was an apt venue for such an expedition. Carlo Aonzo on the mandolin and Lorenzo Bernardi on the guitar lived up to their reputation and played with effortless grace and dexterity.

The journey commenced with one of the earliest written compositions, Terma con variazioni in La Maggiore, by the 18th-century composer, Bartolomeo Bortolazzi. It displayed the dulcet notes of the mandolin and added to the elegance of the location. From the Baroque age, the duo moved to the 19th century classical period, epitomized by the composer, Raffaele Calace. Often regarded as the ‘Father of the mandolin’, Calace’s oeuvre involved technical mastery and incorporated the wide range of the instrument. The first piece, Bolero — an earthy, rustic dance — carried a Spanish flavour in an otherwise Italian dominated programme. The guitar was exceptional and played with precision by Bernardi. In contrast, Calace’s next piece in the set, Serenata Malinconica (‘Melancholic Serenade’), infused an air of gravitas, thereby showing the variation in the mandolin’s range as an instrument of lyrical precision.

The turn of the 20th century saw the emergence of Giacomo Sartori as one of the major proponents of the mandolin. His Pianto di Bamba (‘Tears of a Young Girl’) — a delicate waltz — was played with finesse by Aonzo. Nevertheless, the most beautiful piece of the evening was Enrico Marucelli’s Valtzer Fantastico (‘Fantastic Waltz’) where the mandolin, played in a lively tempo, showed exceptional range and complexity. The concert justified its title, as the musical journey was a true homage to the great tradition of classical Italian music. The mandolin and the guitar complemented each other beautifully. In the end, one could only echo the audience when it unanimously chanted, “encore”.