Madame Gandhi delivers a message of empowerment through her latest video

The multi-talented artiste, percussionist, producer and activist, celebrated Pride Month with a banger 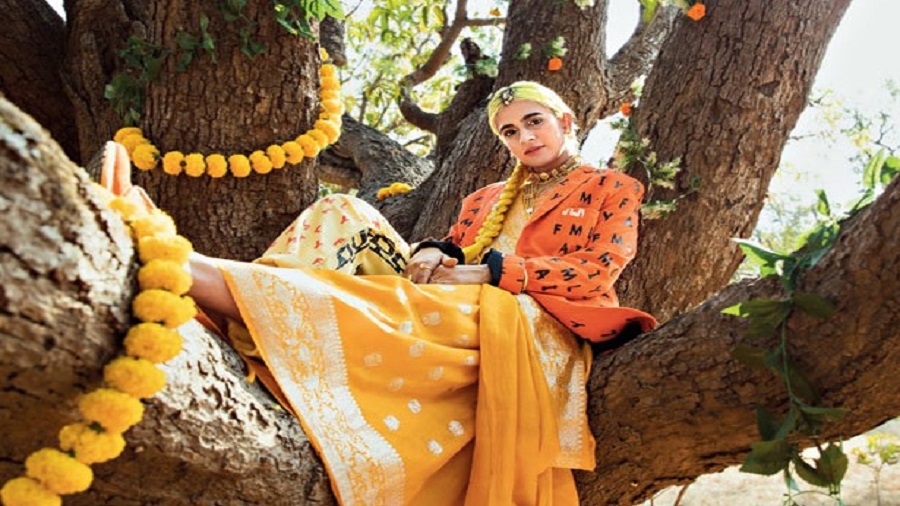 When you become the image of your own imagination, it’s the most powerful thing you could ever do,” RuPaul once said. The Pride Month came to an end on June 30 and Madame Gandhi, multi-talented artiste, percussionist, producer and activist, celebrated the month with a banger. She dropped the music video of her 2019 release Waiting For Me that celebrates the people who are a part of the LGBTQIA+ community.

Madame Gandhi, aka Kiran Gandhi, has never kept away from voicing her strong opinions about gender notions, identity and politics. She, in fact, ran the 2015 London Marathon to combat the period stigma. Other than being the rebel that she is, the artiste has toured as a drummer for M.I.A. and Thievery Corporation and has also performed at the 2020 Vision Stadium Tour hosted by Oprah.

Her own music includes the release of two short-form albums (Voices, 2016 and Visions, 2019), besides a series of music videos produced and conceptualised by women and gender non-conforming creatives. An email chat with the artiste who is now signed with Sony Music Masterworks.

School uniforms, according to Madame Gandhi, depicts conformity, something that is taught from a young age
Sajna Sivan

Why did you plan to release the video for Waiting For Me on the last day of Pride Month?

We chose to release this video during Pride Month to celebrate the queer, gender non-conforming, and trans people in the music video for Waiting For Me. It is important to me to show the vast diversity within our South Asian community itself. This diversity comes in the form of age, ethnicity, geographic location, sexual orientation, gender identity and more. It is also very important to me to show a genuine portrayal of me and my friendships with other LGBTQIA+ people to debunk stereotypes of what it means to have a queer identity.

Tell us about the idea behind the video….

I grew up going to schools between New York City and Mumbai... I attended all-girls schools… a uniform was required. While I loved my education at St. Anne’s School in Colaba, Mumbai, I did feel that it is problematic that we teach conformity at a young age instead of creativity and self-expression. These behaviours as a society are so ingrained in us that we rarely stop to question them. That is why I wanted to use the imagery in my music video to spark the question among my audience: “What does it mean to challenge society’s most problematic norms?”

You have said: “This music video is a call to action for each of us to examine how hierarchy, capitalism and systemic oppression serve to keep us obedient, with little space for dialogue or critical thinking.” Was this a thought that always remained at the back of your head or did something trigger you to write a song about it?

This is something that I have always felt. The coolest part about making a music video is that it quite literally creates a safe space for each of us to comment and dialogue with each other via YouTube and social media. I am so excited to see the conversations the video has already sparked.

The video has been made with an all-female/gender non-conforming team in collaboration with local artistes and designers. Calcutta-based dancer Mekhola Bose (fifth from left) is also featured in the video
Sajna Sivan

In your song you mentioned twice that you’ve been “living in the wild now”. What do you mean by “the wild”?

To me, the wild is about choosing freedom in all aspects of our life. It’s about educating ourselves with the experiences of other people, not just one news source. It is about realising that we get to define what freedom looks and feels like for ourselves. I hope that my audience watches this video and starts to define liberation for themselves, whatever it looks like.

This video was shot during your India tour in February. How did your team and director Misha Ghose scout for the locations?

We wanted to juxtapose an industrial, man-made wasteland against that backdrop of mother nature. To me, this actually represents the masculine versus the feminine. We are so obsessed with building tall phallic structures that we all idolise instead of recognising how divine mother nature really is. So we chose our sites to enable this conversation.

Yellow is a colour that remains constant though. Not only in this video but in a lot of your work. Where does this love for yellow come from?

My name, Kiran, means “ray of light”, and since childhood I have always gravitated towards sunrise and sunset colours. I love how positive they are, joyful, hopeful and fresh. I feel energised by yellow and sunrise colours.

How did you create your team of designers and local artistes that are all female or gender non-conforming?

I worked with Chalk & Cheese films to intentionally cast folks who are typically under-represented in mainstream media, but who are also folks I would want to be real friends with. This is what has created such a genuine bond both on and off camera and represents the world I want to live in.

Tell us about the relevance of the song and video with the current situation the world is in.

I have a lyric — “Mothers, sisters, non-conformists, all the things that they’ve done for us, the earth is still waiting for us…” — to design a trans-inclusive narrative around the lineage of women. I think during Pride Month, and against the backdrop of global protest and pandemic around the world, I wanted to release a video that spoke to how we are all feeling. We all want to feel vibrant and colourful and free. We want to abolish colourism around the world. We want to celebrate people of different gender identities. We want to drum loudly and lovingly and protest systems of oppression that we do not agree with. The video showcases that both visually and lyrically.

You have always been vocal about elevating the female voice and redefining notions of gender. Any advice for them?

Yes, we have to surround ourselves purely with people who love and see us for who we are. If we don’t, then we start to question ourselves and allow the self-doubt to come in. I am very intentional about whom I interact with, because it allows me to shine as bright as I can, and do so in turn for others.

We hear your third short-form album, Vibrations, is expected next year. Anything you can tell us about it?

Yes! It is a far more vulnerable album and one that was clearly made during a time of introspection during quarantine!