Advertisement
Home / Culture / A once and scattered weave
Big Story

A once and scattered weave

Identity politics is the most bandied about word this season. Politicians love it, strategists rock it, analysts roll it. But the people, they live it, for generations. The Sylhet story 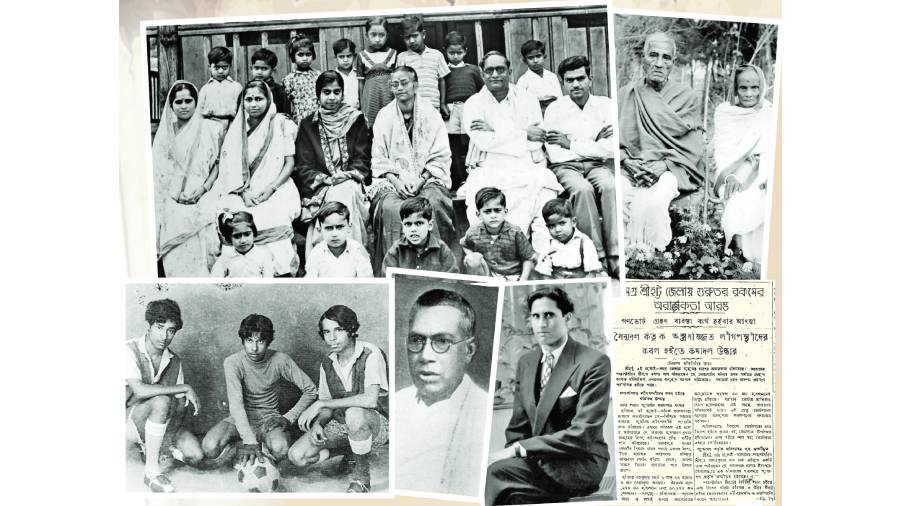 I discovered the ochre book, which no one claimed to have brought home, sometime in the early months of the lockdown. A word on the cover beckoned. Sylhet. I recognised it from the long departed grandparents’ reminiscings; one of many names — Dhaka, Barisal, Comilla, Poyogram... Places I have never been to and know little about, but places that are settings to stories that are my legacy.

It is from this book, Remembering Sylhet by Anindita Dasgupta, that I learnt of Sylhet’s singular story.

Rabindranath Bisharad (second from right) in front of Rilbong L.P. School, Shillong, along with other teachers and students
Courtesy Malabika Bisharad
Advertisement

Geographies, just like people, are born with a fortune, or as we say in these parts — kopal (forehead). Destiny’s chosen pattern is evident from the start. And this is destiny’s weave for Sylhet. 1826-32. Assam becomes part of Bengal. Sylhet is a district of the Bengal Presidency of the time. 1874. Assam province is created with Shillong as its capital. Sylhet, though dominated by Bengali-speaking people, is hitched to Assam. Reason: most likely, economic; Sylhet is a revenue-surplus district. 1905. Partition of Bengal. Sylhet is back in Bengal. 1912. Partition undone. Sylhet is back in Assam. 1947. July 6-7. Referendum. Sylhet has 60 per cent Muslims and 38 per cent Hindus. Sylhetis are asked to choose between India and Pakistan. July 14. Results out, but discussions, arguments continue. In between, general assumption is Sylhet is now part of East Pakistan. August 17. Turns out, its thanas Ratabari, Badarpur, Karimganj and Patherkandi are to remain in Assam, in India. Today, Sylhet is in Bangladesh.

I was surprised to learn that thus tossed about by lords, administrators and politicians, after so many displacements, such a thing as a Sylheti identity has endured. Dasgupta’s book teases out the very nuanced nature of this identity — there is a chapter titled “Being Sylheti in Assam” and subheads in the chapter on the referendum called “Sylheti Hindu Memories” and “Sylheti Muslim Memories”. I found social media pages of various Srihatta Sammilanis all over India. Srihatta is the olden name for Sylhet. I also came across a private group called Amra Hokkol Khati Sylheti and an Indian Sylheti Forum, to name a few. I learnt that of the 6,00,000 or so Bangladeshis in Britain, 90 per cent is from Sylhet.

Against the backdrop of the Assembly elections and the entire insider-outsider buzz, whims of political masters, confusion and fear among citizens, the Sylhet story assumed new significance, if only in my mind. I also wanted to understand what constitutes this Sylheti identity and so I started reaching out to Sylhetis and those who lived around Sylhetis.

The next few paragraphs are a spread of memories and sentiments gleaned from those interactions. I hope you will catch a glimpse of Sylhet and Sylhetiness in them. I have tried to stitch very little, analyse even less, not moralise at all.

The Sylhet Referendum took place on July 6-7, 1947. Here is a report that appeared in Anandabazar Patrika on July 7 that year. The headline reads:
ABP Archives

Mrs Dasgupta, who lives in Shillong, spoke about the Sylheti fondness for shutki maachh, she spoke about Dhamail, the Sylheti folk music and dance. Sudipta Bhattacharjee, a Calcutta-based journalist, shared her experience of attending Sylheti weddings in Shillong. “Acquaintances are invited for ca or afternoon tea, while near ones are invited over for dinner for bhaat.” Malabika Bisharad, who has married into a Sylheti family, spoke about the community’s distinctive script, cultural wealth and investment in education. Her father-in-law had moved to Shillong in the early 1930s and had been the head teacher of Rilbong L.P. School. I learnt about the Srihatta Sammilani that was founded in 1876 by a group of 15-20 students who had come to Calcutta to pursue higher studies. “It was meant to knit together Sylhetis away from home. And it took on the added responsibility of propagating primary education in Sylhet, particularly for women,” said Ahindra Kumar Bhattacharjee, 78, who has written a book about the organisation. Srihatta Sammilani is 145 years old now and still alive, albeit with altered goals. More than one person reminded me that the founder of Calcutta’s National Medical College, Sundari Mohan Das, and freedom fighter Bipin Pal (of the Lal Bal Pal triumvirate) were both Sylhetis. Many non-Sylhetis part-jokingly remarked about the Sylheti pyanch, or shrewdness, and the Sylheti tendency to pick a quarrel.

UK-based writer Shahida Rahman's father, Abdul Karim, had arrived in London from Sylhet's Fenchugonj in 1957. This photograph was most likely taken in the early 1960s in the Ramsey & Muspratt studio in Cambridge. Karim went on to become a successful restaurateur and settled down in Cambridge
Ramsey & Muspratt

Everyone spoke about the Sylheti dialect — though there is a quarrel about it too, some say it is a distinctive language, much like Odia and Assamese, others claim it is a Bengali dialect. Joydeep Biswas, an associate professor at Silchar’s Cachar College and a Sylheti himself, told me, “There were many districts in East Bengal, but it is the Sylhetis who have been able to keep alive their language, be it in Bangladesh, edesh, bidesh... It is indeed something to think about.” UK-based writer Shahida Rahman’s father had arrived in London from Sylhet’s Fenchugonj in 1957. “As with all men who came from East Pakistan to England at the time, to have a better life,” she said to me in an email. Shahida’s father died when she was 13 and she says she never had the opportunity to ask him about his early life, but she has written a novel, Lascar, which is about a slave labourer aboard a British steamship making the journey from Calcutta to London. Shahida told me, “We have preserved our Sylheti Bengali by learning the language. I speak fluent Bengali.” Enam Ali, who is a businessman and owner of the restaurant Le Raj, had made the journey from Sylhet to London in the early 1970s for higher studies. He told me over phone in Bengali shot with a Sylheti cadence that he believed restaurants did their bit in keeping alive legacy cultures. He said, “The culture has travelled into the menu and it does more than fill the stomach, it keeps a language alive.” The menu of Le Raj has Shadaa Bhaat, Naikol Pilau, Calamari Jaal Tokmita, Chuto Chingri…

I learnt of individual journeys out of Sylhet and of big and small settlements of Sylhetis — in Shillong (now in Meghalaya), Nabadwip (in Bengal’s Nadia district), all over Assam with a particularly high concentration in the Barak Valley. Some spoke about food typical to the community — the chunga peetha, a rice cake made by stuffing rice into a bamboo shoot, and a fried kochi kumro or pumpkin preparation with a masala stuffing whose ingredients I forgot to ask for.

Ranjit Chakraborty, who is a retired principal of Calcutta’s Vidyasagar College, said, “A central ingredient of Sylheti identity is the language, the other is harmony between Hindus and Muslims.” Chakraborty’s father, just like Dasgupta’s grandfather, had been a government servant and was given a choice in 1947 to pick the government he would like to serve. Dasgupta’s grandfather had moved from Habiganj to Shillong; Chakraborty’s father moved from Moulvibazar to Silchar. At the time, Chakraborty was a boy of eight. He spoke about the influence of Sri Chaitanya and Sufi saint Shah Jalal on Sylheti culture, about folk poets of the region who belonged to both Hindu and Muslim faiths and whose compositions reflected this syncretism.

The 84-year-old Jyotirmoy Bhattacharjee, who is an engineer-cum-architect and has designed 30 temples across Bangladesh for the Ramkrishna Mission, was full of random but photographic Sylhet memories. The Bhattacharjees moved between their home in Manicktala in north Calcutta, Silchar and the family home in Sylhet’s Moulvibazar. Bhattacharjee recalled the annual visits during Basanti Puja, celebrated in the month of Chaitra. He told me he remembers the referendum year — running around with a jhanda, parroting slogans. More memories. He said, “One day Baba and I were headed for Kadamhata, when on the way we came upon a structure. Not a soul was in sight, but father said to me, ‘Eita Allah-r ghor, salaam koro… This is Allah’s house; pay your respects.” He recited some lines he had heard a bhikshuk sing in 1948 — Kolir yuge ki hoilo, buddhihara manush hoilo, ghor bari chhaira gelo Kailashahar-er pare.’ Kailashahar is in Tripura. The mendicant was singing about the exodus.

Nearly everyone spoke about the referendum. Some used the word “conspiracy” for it, some called it “a prohoson” or mockery. Some spoke of it as (Congress leader) Gopinath Bordoloi’s doing, and left it at that. No one spoke about the experience of being located in Assam in connection with the Sylheti identity.

Owner of UK's Le Raj restaurant and founder of The British Curry Awards, Enam Ali, was appointed Member of the Order of the British Empire in 2009. Here, Ali (extreme right) is seen with his friends from Aided High School, Zindabazar, Sylhet. The photograph was taken at Ovisar Photo Studio in Zindabazar in the early 1970s

In Bipin Pal’s autobiography, Sattar Batsar, he writes that his education began in Srihatta. But before he joined the English medium school there, his father took him to a maulvi to learn Farsi.

Pal also wrote that when his father discovered he had been secretly enjoying lemonade produced in a Muslim factory and sold outside his school, he put Pal under house arrest till his mother intervened. Bhattacharjee spoke of the caste arrangement in Sylhet and its concurrent social practices. Bhattacharjees and Chakrabortys, both Brahmins, never sat down for a meal together. And there was the whole untouchability arrangement. He added, “But Gandhi’s constant efforts made a difference.”

Nearly everyone I spoke to described “amader bari”, their respective family homesteads in Sylhet in great detail, without any prompting. Everyone seemed to have undertaken the pilgrimage back home, at least once.

Map of Bengal from G.U. Pope’s A Textbook of Geographical Notes, Genealogical Tables, Examination Questions, published in 1880. Sylhet was made part of the newly created Assam Province in 1874
Wikipedia

Locatedness is crucial to Sylheti identity,” said Cachar College’s Biswas. “The Sylheti person in Delhi might be able to declare his pride in his identity, but in Assam that is not possible. After all, Sylhet is now a piece of land in Bangladesh and Assam’s political situation stems from the perceived problem that Bangladeshis are coming in, stealing their jobs… Even 20 years ago in wedding cards there would be a line about purbo nibash or ancestral home, but post the Assam Andolan such traditions have been done away with.”

Identity politics… I am tempted to pull together threads and write up a neat conclusion, but no. It’s all there.

Partition: memories for the future