A moveable street feast in Calcutta

Prasun Chaudhuri goes on a walkabout to sample the fare 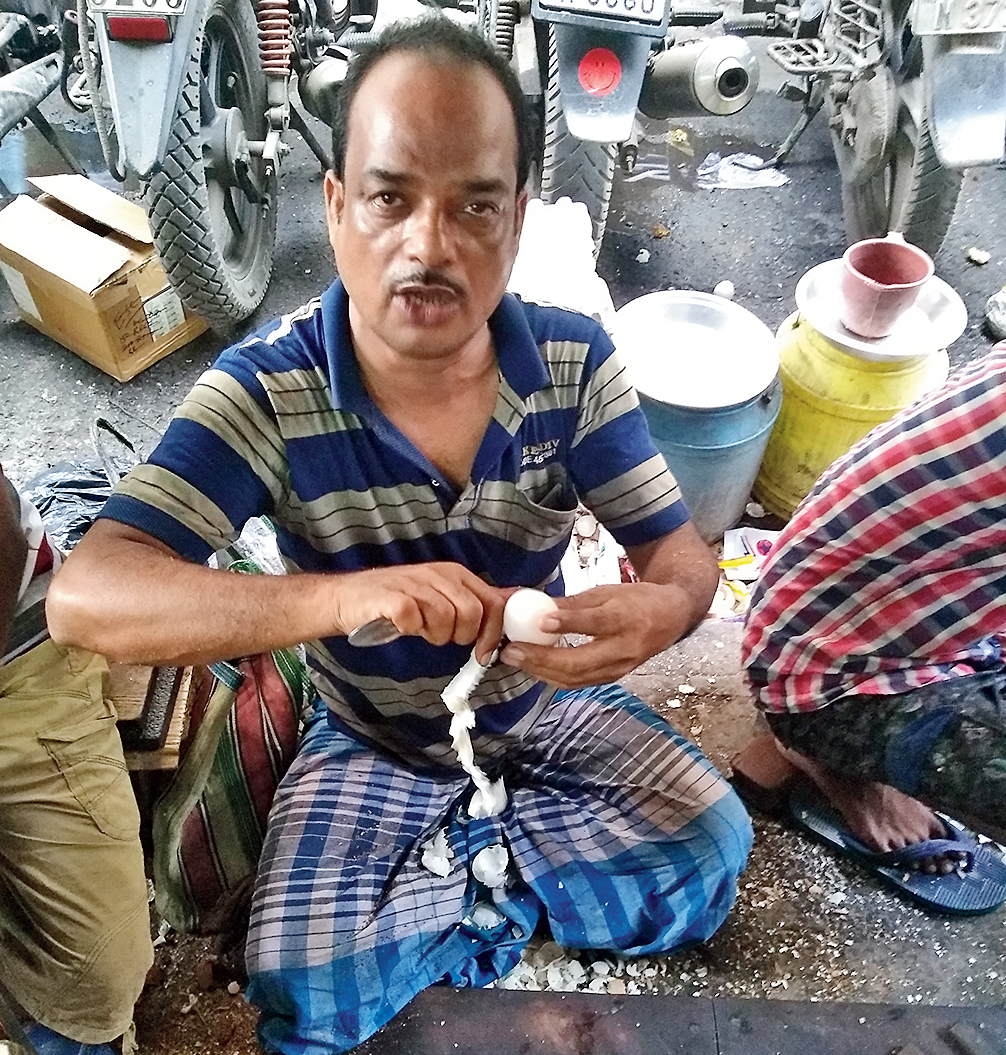 A walk down a sidewalk in Calcutta is like walking down a buffet line, writes Christine Kaaloa on her food blog, Grrltraveller. The entry reads: “This city is phenomenal when it comes to street food. Some hawkers practically work and sleep in their stalls. Each morning, they wake up and prepare food, hot, spicy and savoury for the hungry passers-by.”

A recent survey conducted by travel portal booking.com has declared Calcutta the top street food hub of India, ahead of Amritsar, Delhi, Ahmedabad and even Mumbai.

Serenaded by honking cars and buses amid smoke and dust, these vendors have been carrying on for decades. Profits are minimal, but sales volumes keep them going.

Indira Chakravarty, a public health expert, whose studies on the city’s food vendors have led to policy changes at various levels, tries to get street food vendors to cater whenever she organises seminars and conferences.

Her reason: street food is safer because vendors rarely store food. As a consultant with the Food Safety and Standards Authority, she has seen how a lot of hotels store meat, poultry and non-vegetarian items for as long as six months. “A street vendor prepares food in the morning and by evening everything is sold out,” says Chakravarty, who is now chief adviser of West Bengal’s public health engineering department. As if to underline her point, she orders toast, omelette and peyanji — an onion pakoda variant — from a vendor near her office in Dalhousie Square.

Chakravarty has conducted surveys of Calcutta’s street food on behalf of the All India Institute of Health and Public Hygiene (AIIHPH), whose results have been feted by the United Nation’s Food and Agriculture Organization and the World Health Organization. The verdict: The spread is tasty and highly affordable. At the time of the survey, in 1995, hygiene standards needed improving.

That has changed, Chakravarty says. “Our members try to maintain standards and learn the basics of food safety,” says Anadi Saha, general secretary of the Hawker Men’s Union and Hawker Sangram Committee. He adds, “We have had workshops organised by AIIHPH experts.”

Though much has been done, much remains to be achieved. Vendors don’t have a clear idea about harmful artificial colours — like the carcinogenic metanil yellow used in jalebis — or spurious food additives. Neither do they know that deep frying in the same oil is bad for health. But the biggest bugbear seems to be the lurking extortionists with their continuing threats of ousting vendors.

“We are trying to fix all these,” says Saha, who is looking forward to the civic body’s suggestion of setting up smart food kiosks. Vendors have also been promised ID cards and medical insurance coverage.

On the footpath adjoining the Hindustan Building of the Life Insurance Corporation of India, brothers Barun and Bholanath Den have just set up their breakfast stall. Sitting atop an earthen stove is a frying pan, which exchanges place occasionally with a wire mesh laden with thick slices of bread. The frying pan is for the eggs. Most office-goers demand two slices of bread with a boiled duck egg cut in half and sprinkled with salt and pepper. Those with more time on their hands often opt for a half boiled egg, cut open and smeared on the bread and covered with a drizzle of finely chopped onions.

“Our father set up the stall in 1978 when this was a small market for radio, transistors and their spare parts,” says Barun as he shells a hen’s egg with the end of a teaspoon. His dexterity and speed is such that the shell comes off as a continuum. “A massive flood had destroyed our village, Amta, 50 kilometres west of Calcutta,” says Bholanath as he passes a piece of toast to his son, who then slathers on it much butter and sprinkles sugar.

Insurance agent Chandan Bhowmick says, “I leave home at 7.30am. There’s no time for anything. I eat breakfast here and wash it all down with a bhaanr of tea.” The eggs and toast cost Rs 20 and the tea, Rs 5.”

The Den brothers feed about 700 people every day till 8pm from Monday to Saturday. “By evening everything is sold out,” says Barun. “Nowadays we are getting orders for office picnics and from film production units,” he adds proudly.

*9.30am — Crossing of Princep Street and Ganesh Chandra Avenue

E. Chandran Swami has been selling south Indian food at his kiosk here since 1968. “I came in 1961 from Kilalkulam near Madurai. I was 14,” he reminisces as he pours batter with one swift circular motion on a square tawa. He didn’t learn to make idli, dosa and uttapam in Tamil Nadu. He learnt it all at a south Indian joint here. Seven years later, he set up his shop. Today, at 70, he is helped by his grandsons.

Sanjoy Roy wolfs down a masala dosa (it costs Rs 50). He is a clerk employed with a private firm that deals in automobile parts. “You must try his special tomato-onion uttapam,” he tells us while dipping pieces of dosa in crimson chutney. “You won’t find this special chilli-garlic chutney anywhere in Calcutta.”

Chandran cooks all the food early in the morning at his rented house near New Market with the help of his wife, daughter and grandsons. He arrives at the kiosk sharp at 9am on a cycle van. He takes special care to store the coconut chutney and other perishables in ice boxes during peak summer. The cheapest item at his kiosk is a single dahi vada, which comes for Rs 17. The most expensive item on his menu is mixed cheese butter uttapam — it costs Rs 65. Of late, he’s been getting a lot of contracts from school canteens.

Every day, at 6pm he shuts shop, purchases a Tamil newspaper and heads for the Maidan. There, lying on the soft grass, he reads leisurely the day’s news. It is a stale serving this, but that’s how he likes it.

When we reach Rajneesh Walia’s foodstall Mission Dhaba, there is already a large crowd around the tandoor. About 40 people, including several cab drivers, are milling around. The plates in their hands are laden with dal makhani, chana, paneer, kulcha and pulao.

Gopal Das, who drives a yellow taxi, says he lunches here at least four times a week. “My order seldom changes,” he says. “I take half plates of chana masala, dal makhani and raita, alongside two tandoori rotis. All of it comes to Rs 60.” We take a cue and place the same order. The dal makhani has a lovely smoky taste. The masala kulcha is as soft as a pillow. And the Rs 14-a-plate raita has pineapple and pomegranate in it.

Rajneesh cooks the food with a couple of assistants at a small shop on Mangoe Lane. He says, “My father, Surjit Singh Walia, started this 20 years ago. But this ‘half-plate’ variety is my innovation.”

Rajneesh has started getting orders to cater for weddings and private parties. “No advertising and all,” he says matter-of-factly. “It’s mostly word-of-mouth.”

After a heavy lunch, it’s time to wrap up with some desserts. Bablu Kanta Ghosh has been selling Bengali sweets on the pavement near the India Coffee House for nearly 50 years now. “I learnt my craft at a sweetmeat shop in Howrah,” says Bablu. He himself hails from Haripur village in Hooghly district, 35 kilometres north of Calcutta.

From Monday to Saturday, he stays at Bowbazar’s Chhana Patty, the hub of cottage cheese. Chhana is the basic ingredient of most Bengali sweets. Bablu prepares sweets that are not easily available at sweetmeat shops — malpua, labanga latika, bel morabba and darbesh.

The bel morabba is a big hit with those who have problems with their morning constitutional.

“I make these myself and bring it all here in a hand-pulled cart,” says Bablu. He also sells rasogolla, chhana pora, lyangcha, rasomalai and a variety of sandesh sourced from Hooghly. “Sweets from Hooghly are far better than those you get in the city,” he says. During winter months he sells nalen gurer sandesh and rasogolla.

Sunirmal Bose, a 65-year old office peon working at a travel agent’s office, is one of Bablu’s oldest and most regular customers. “I am a big fan of his malpua and labanga latika,” he says. “During Vijaya Dashami, I take a whole lot of these home.”

Every Saturday, Bablu leaves for his village. A sweet end to a mixed week.