Vistara to have 70 planes in fleet by mid-2024: CEO Vinod Kannan 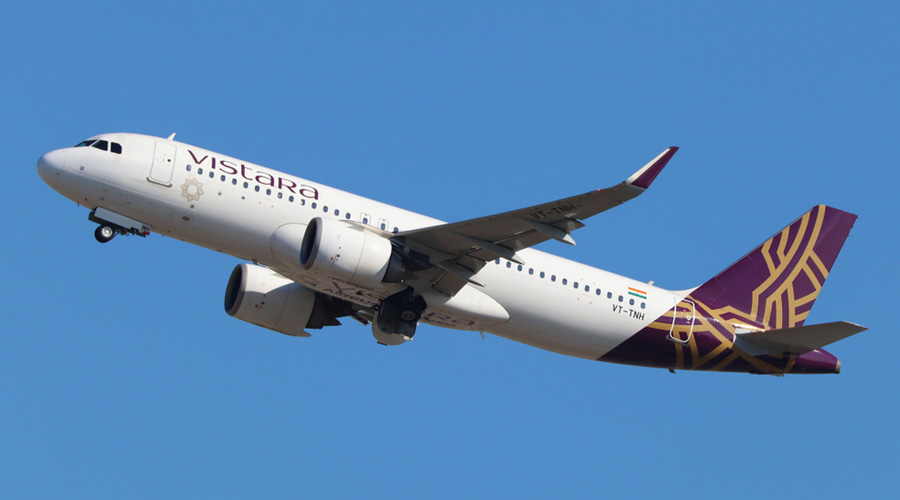 Full service carrier Vistara will continue to expand and expects to have a total of 70 planes by mid-2024, its chief Vinod Kannan said on Tuesday.

The airline, a joint venture between Tata Sons and Singapore Airlines, reported an operating profit for the first time since inception in the three months ended December 2022.

Vistara is set to be merged with Air India.

By the middle of next year, Kannan said it will have a total of 70 aircraft, including 7 Boeing 787s.

Among the 53 A320 neos, 10 planes will have all economy class and the rest will have three classes.

Currently, the airline has a fleet of 53 aircraft.

"We will continue to expand... more international routes (will be added)," Kannan said.

According to him, there are constraints in terms of traffic rights and slots. "We would love to operate more flights to Dubai, Singapore but those are all constrained by traffic rights. We had to look at other options... we will be looking at more points in the Middle East," he added.

About the performance in the December quarter, Kannan said the operating environment for the last year itself and the last quarter has been quite strong when it comes to demand and average fare perspective.

"It was one of the strongest quarters (December quarter) we had from the revenue perspective, if you look at the overall revenue or whether you will look at from unit revenue.

"Strong demand which resulted in high load factor and that demand was not turned away due to high fares, (so), we were able to get a very strong revenue performance. The second aspect is that the US dollar and fuel price have been on an increasing trend... We have some sort of scale, we have 53 aircraft. So, obviously unit cost and deployment does reduce to a certain extent," Kannan said.

Further, he said there is also the impact of the deployment of wide-body aircraft and currently Vistara has three such planes in its fleet.

"They have been doing extremely well and the demand to Europe has been strong. In fact, flights have been flying with load factors in excess of 85-90 per cent. Therefore, that plays a positive role in the performance of the airline," he added.

Without disclosing the exact profit figure in the December quarter, the airline on Monday said it crossed the USD 1 billion revenue mark and remained EBITDA positive in the current fiscal year.

EBITDA refers to Earnings Before Interest, Taxes, Depreciation and Amortisation.

"For the first time since inception, the airline reported a net profit (excluding unrealised foreign currency loss and non-operating income) for the quarter ended December 2022," Vistara said in a release on Monday.