The Reserve Bank is finalising a list of debtors whose companies may be taken over or assets written down to resolve the bad loan crisis in state-run banks, finance minister Arun Jaitley said today. 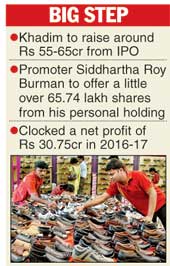 New Delhi, June 12: The Reserve Bank is finalising a list of debtors whose companies may be taken over or assets written down to resolve the bad loan crisis in state-run banks, finance minister Arun Jaitley said today.

"The RBI is at a fairly advanced stage of preparing a list of those debtors where a resolution is required through the insolvency and bankruptcy code process. You will be shortly hearing about it," Jaitley said after a meeting with the heads of state-run banks here.

Last month, the government gave powers to the RBI to issue directions to any bank or banking companies to initiate an insolvency resolution process in respect of a default, under the provisions of the Insolvency and Bankruptcy Code, 2016.

Bad loans, including public and private sector banks, have risen to nearly Rs 10 lakh crore. It stood at Rs 6.97 lakh crore in December 2016.

Much of the toxic assets in state-run banks - where bad loans jumped a massive 56 per cent last year - are in the steel, textile, power and infrastructure sectors.

The total amount owed by the top willful defaulters is believed to be Rs 50,000 crore. The government has already ordered PSU banks to initiate a forensic audit of the top 50 corporate defaulters.

This follows the Comptroller and Auditor General's desire to learn through an audit whether these defaulters had any criminal intent behind the default.

A jump in provisioning has caused many of the state-run lenders to report losses. Poor financials and erosion of market share to private sector competitors have resulted in a move for consolidation of the state run banks.

"I can tell you we are actively working in that direction (consolidation of state run banks)," the minister said, while declining to give the details as this was stock price-sensitive information.

As many as 81 cases have been filed under insolvency and bankruptcy code and 18 of these have been initiated by financial creditors.

"These are already before the National Company Law Tribunal and since a bulk of the NPAs, about 70 per cent, are either in consortium or in multiple banking arrangement, speedy resolution is required," he said.

"As over the next few months pursuant to the new ordinance, further effective action is taken, we will see the issue of resolution move forward," he added.

Infosys CEO Vishal Sikka today met Arun Jaitley amid industry-wide concerns about tighter visa norms in key markets such as the US and layoffs in the sector.

The 45-minute meeting between Jaitley and Sikka also assumes significance as Prime Minister Narendra Modi is scheduled to visit the US later this month.

Over the past few months, Indian IT companies have been confronted with closer scrutiny and tighter visa norms in the US, a market that accounts for nearly 60 per cent of the country's IT exports.

According to sources, Infosys had sought the meeting.

However, Sikka declined to comment on the proceedings of the meeting.