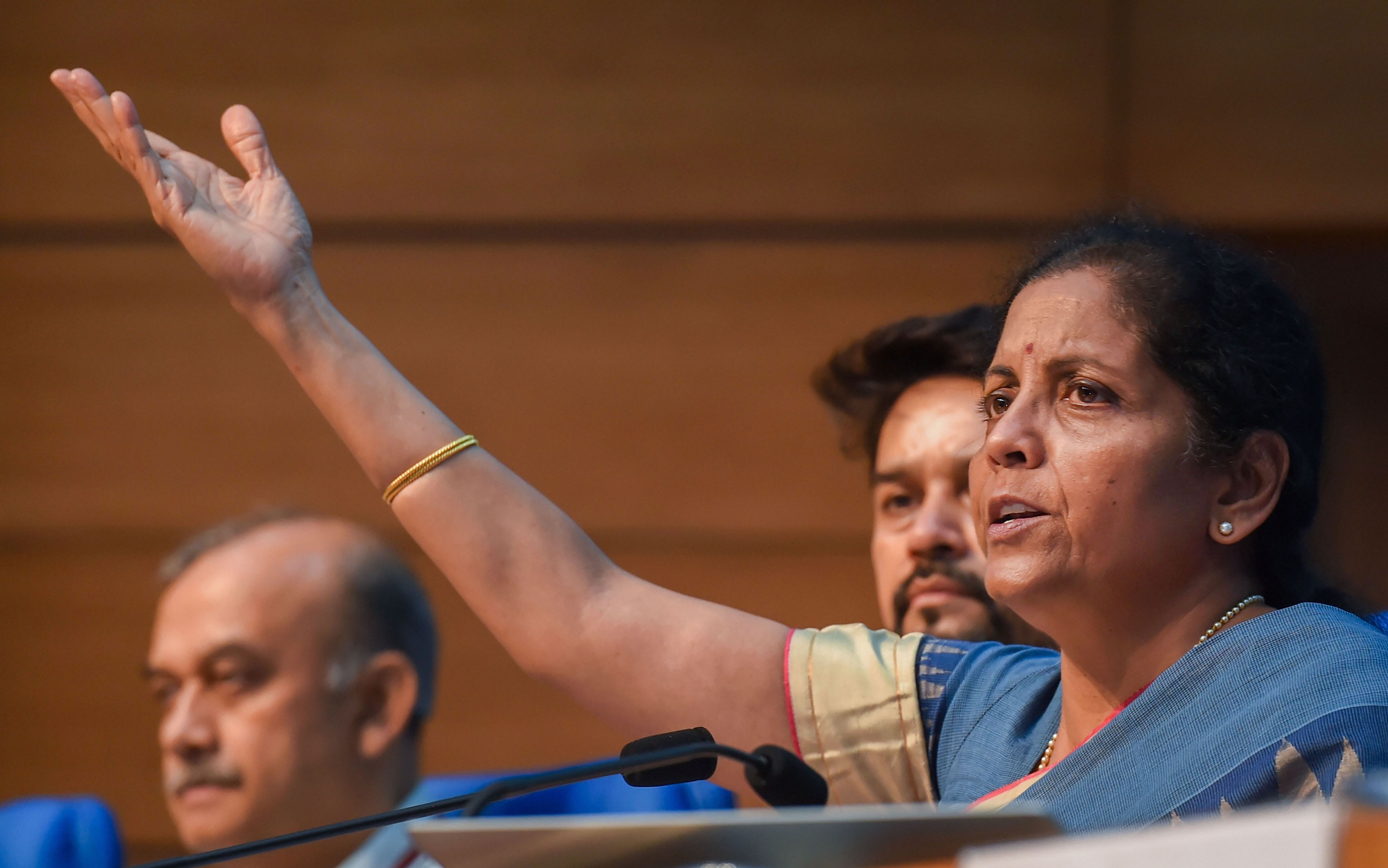 Finance minister Nirmala Sitharaman scrapped an extra capital gains surcharge that had sent investors fleeing for the exits and announced a slew of steps, including moves to promote cheaper bank and car loans, in a bid to revive economic growth hovering at a five-year low.

Sitharaman made it clear that the sweeping package of changes was the first instalment of a government effort to put the economy back on track and also convince the business community that it was “respecting and honouring wealth creation”. Sitharaman promised to announce two more packages in the next two weeks.

The government withdrew an extra levy on long- and short-term capital announced in the July budget. The surcharge had drawn stiff criticism from both domestic and overseas investors and prompted a rout in domestic markets. Foreign funds had voted with their feet by withdrawing some $3 billion since the levy was unveiled in the budget, according to Bloomberg.

Sitharaman told a news conference that the situation for investors was now back to the “pre-budget position.” The surcharge “goes in simple words.” she said. The revenue impact from lifting the enhanced capital gains surcharge would be around Rs 1,400 crore, the government said.

Importantly, the government also withdrew its draconian provision introduced in the budget that corporate social responsibility violations would be treated as a criminal offence. “I want to dispel all doubts. There is no intention to go for prosecution,” Sitharaman told the press conference in New Delhi.

In addition, the minister announced plans to inject Rs 70,000 crore to swell PSU banks’ capital to push lending growth. And, in an attempt to help boost the badly flagging auto industry, she also ended a ban on ministries purchasing new cars. Official GDP figures due out next week are expected to show the economy expanded by 5.6 per cent in the three months to June, even slower than in the previous three months.

Sitharaman’s actions come after her budget came under fire from business, investors and financial analysts for a lack of measures to stimulate weak demand in a range of industries from fast-moving consumer goods to automobiles.

Business leaders welcomed the move. “The most important announcement was the removal of the surcharge on FPI and DI (domestic investor) profits. Because this was strong evidence of a listening capacity and the humility to course-correct,” said Anand Mahindra in a tweet. “More than anything else, that should regenerate spirits,” he added.

Elaborating on the backdrop behind the government’s moves, Sitharaman said, “I want to give you a picture of what is happening globally. Global growth is 3.2 per cent, likely to be revised downwards. Many organisations say the global demand is very weak.” The US-China trade war and the Chinese currency devaluation has had “effects worldwide,” she added.

Simultaneously, to prevent a further economic slowdown the government has made a slew of changes, including making more bank credit available for housing and vehicle loans and ensuring that interest rate cuts would be passed on to consumers. The housing finance companies will get a package of Rs 30,000 crore compared to the earlier Rs 20,000 crore which should improve the momentum of lending.

To promote swift transmission of monetary policy easing, banks will henceforth have to link their loan products to the Reserve Bank of India’s cuts in its benchmark lending rate known as the repo.

The central bank has reduced the repo rate by some 110 basis points since February to boost economic growth. But the government says the banks have not sufficiently reflected the rate cuts in their own lending rates. The government’s ruling now means “reduced EMI housing loans and working capital to be cheaper,” Sitharaman said, adding she’d been holding discussions with the public sector banks and that they have agreed to pass on reductions in interest rates to consumers.

Commenting on the government’s package, Crisil chief economist Dharmakirti Joshi, said: “There will be some revenue loss from these measures but it should be positive for sentiment which is sagging. And there is hope that further measures will be coming in the next few weeks.”

Importantly, though, the government has not introduced reductions in GST to counter a slowdown in the automobile sector, indicating that its finances are tight and it therefore has limited room for manoeuvre. Joshi said: “The route of giving a fiscal stimulus has been avoided. There are no tax cuts for automobiles.” However, he pointed out that other changes like a scrappage policy will be introduced to help the sector.

Sitharaman said that the changes did not mean any deviation from the government’s economic reform plans, declaring that: “Reforms is a continuous process and the momentum of reforms will continue.”

Among other measures to strengthen growth, the government will give cash support to home-finance companies and will “expedite” tax refunds. All pending GST refunds due to MSMEs will be paid within 30 days and future refunds in 60 days.

The government’s also moving to remove the fear of “tax terrorism” among the business community and will be introducing centralised computerised processes to reduce the chance of harassment from individual tax officials. Also, all old notices will be cleared by October 1 and future notices will have to be decided on in a three-month time-frame.

Sitharaman said that she believed the government’s tax targets were still achievable, despite India’s April-June tax revenue collection being the lowest in 10 years. She said she did not “get the feeling that they (the tax department) will have to stretch themselves too far to achieve the targets.”

To make it easier to pay taxes, she said filing returns will be simplified. Also, tax scrutiny will be randomised from Vijay Dashami day -- one odd over-enthusiastic officer won't be able to harass anybody,” she said. But people who are gaming the system” will face action, she added.

She promised that the tax goals would be realised without “any over-reach or harassment” by the tax department. In addition, she said CSR violations would be treated as civil offences rather than as criminal offences. However, the higher income tax surcharge will remain in place for high net worth individuals and the government will look at the situation again by 2022.

And in a move that will cheer start-ups, Sitharaman said that angel tax provisions would not apply to the fledgling operations or those who invest in them. “We will set up a cell, led by member of CBDT, for addressing problems of startups. Startups with an I-T issue can approach this panel,” Sitharaman declared.

“The slacking economy and the slump in various sectors including automobiles, housing and MSMEs was a grave concern – not just for industry stakeholders but also for the government,” noted Anuj Puri, chairman of Anarock Property Consultants. “In a major boost to the slowing economy that comes literally in the nick of time, the FM today has hit a sixer with a slew of announcements for the banking and financial sector including NBFCs, HFCs and even MSMEs.”

He said the government was “taking a heads-on approach to addressing issues, supporting the key drivers of the economy and giving each of the sectors - including real estate – a massive shot in the arm in these stressful times.” The announcement to offer more credit support for purchase of homes, vehicles and consumption goods is an extremely welcome move “which does not come a moment too soon,” Puri said.

The government’s moves “will significantly improve the momentum of lending to cash-strapped developers by the NHB. Many developers will now be able to complete their projects stuck or delayed which were languishing due to lack of funds – thereby benefiting their buyers directly,” Puri said.