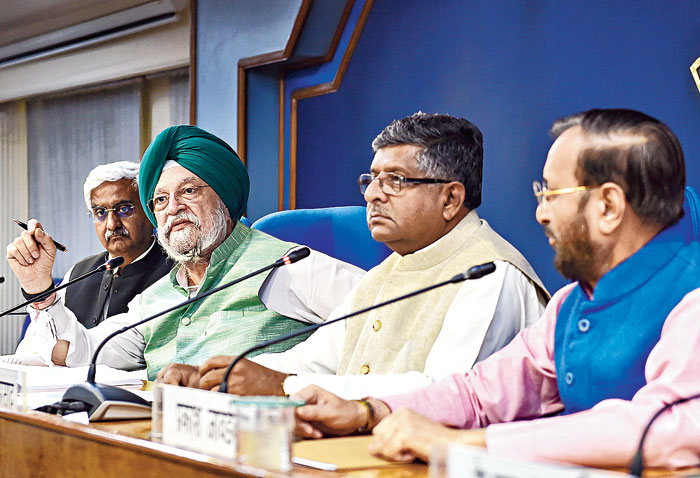 The Union cabinet on Wednesday approved the merger of MTNL and BSNL, in a Rs 69,000-crore revival package for the telecom PSU duo that envisages a VRS covering 50 per cent of the employees, the issue of Rs 15,000-crore of sovereign bonds to partially fund the rescue plan and allocation of 4G spectrum.

“BSNL and MTNL are not being closed, divested or hived off to any third party. They are a strategic asset. We want to make them competitive, bring in professionalism,” Union communications minister Ravi Shankar Prasad said after the cabinet meeting.

Prasad said before the merger, MTNL will be a subsidiary for BSNL and the government expects the companies to become profitable over the next two years. BSNL is unlisted, while MTNL is listed, though its net worth has turned negative.

BSNL had 116 million subscribers in August with a 12 per cent market share in the highly competitive telecom market in the country, according to Trai data.

BSNL and MTNL will raise Rs 15,000 crore through sovereign guaranteed bonds to meet the immediate capital requirement. They will be allocated 4G spectrum worth Rs 20,140 crore and GST relief of Rs 3,674 crore that would have been levied on the spectrum.

Prasad said BSNL and MTNL would offer voluntary retirement to their employees aged 50 years. The cost of the VRS will be borne by the government through budgetary support.

The ex-gratia component of VRS will require Rs 17,169 crore in addition to pension, gratuity and commutation. Details of the scheme will be

“The VRS is voluntary; nobody can be forced to opt for it,” Prasad said.

The government has set a deadline of January 31, 2020 for the employees to opt for the scheme.

In the package, the government has approved Rs 17,169 crore under the ex-gratia component and Rs 12,768 crore for early pensionary benefit.

“Employees above 53.5 years will get 125 per cent of the salary they could have earned in the balance period of their service,” telecom secretary Anshu Prakash said.

Employees in the age bracket of 50 years to 53.5 years opting for VRS will get 80 per cent to 100 per cent of the remuneration to be paid in the remaining period of their service.

R.C. Pandey, general secretary of Bharatiya Telecom Employees Union (BSNL), affiliated to the Bharatiya Mazdoor Sangh of the Sangh Parivar, said: “We would have been much happier if the third pay revision committee recommendations were also considered.”

Prakash said the 4G spectrum would be allocated to both the companies administratively within a month.

“Spectrum allocation to BSNL worth Rs 14,115 crore will be in lieu of equity and about Rs 6,295 crore for MTNL in lieu of preferential shares,” Prakash said.

Allocation will be at 2016 prices, which will require a payout of Rs 4,000 crore from the Union budget.

The company has already installed 10,000 mobile sites for 4G service in select cities of Kerala, Rajasthan and Uttar Pradesh and plans to activate all of them within one and half month.

”In the first phase, we have plan to roll out 60,000 mobile sites for 4G services across India in the next 12-15 months. These sites will be rolled out in cities where penetration of 4G handset is high and BSNL has good customer base,” BSNL Chairman and Managing Director P K Purwar told PTI.

”The assets primarily include land assets but also rental and leasing of their buildings. MTNL has around 29 retail outlets in Delhi alone,” Prakash said. BSNL also has huge tower assets. Its subsidiary BSNL Tower Corp. Ltd. (BTCL), was incorporated in January 2018.

”The debt on BSNL is the lowest. They can raise capital expenditure required for rolling out network from the banks and bringing in efficiency in their operations,” Prakash said.