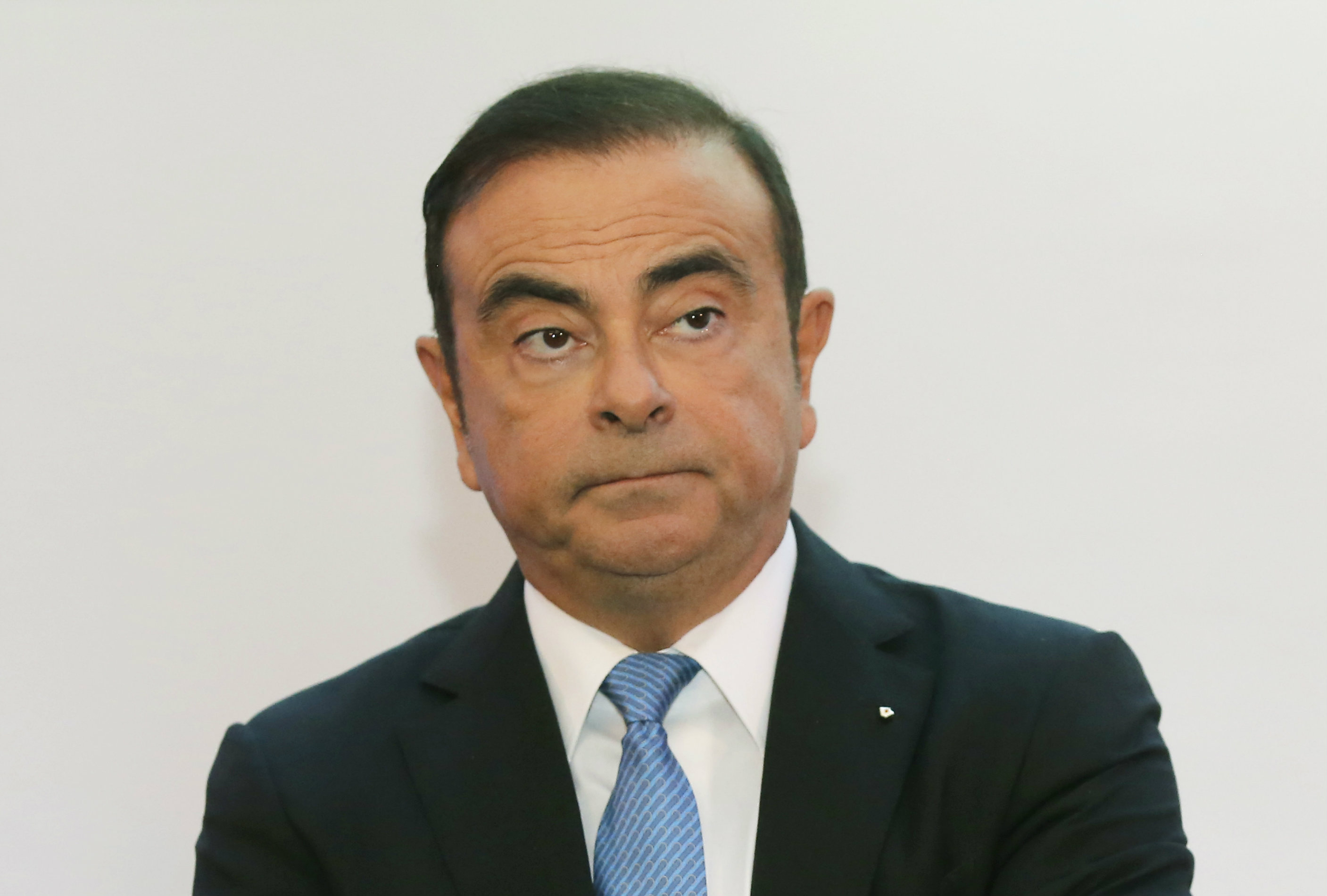 Carlos Ghosn told a Tokyo court on Tuesday that he was innocent, defending his honour in his first public appearance since he was arrested on November 19 and charged with false financial reporting.

'Your honour, I am innocent of the accusations against me,' the former Nissan chairman told the judge, speaking firmly and calmly as he read from a statement. 'I am wrongfully accused.'

Prosecutors have charged Ghosn, who led a dramatic turnaround at the Japanese automaker over the past two decades, with falsifying financial reports in underreporting his income by about 5 billion yen ($44 million) over five years through 2015.

They also say he is suspected of having Nissan temporarily take on his investment losses from the financial crisis.

Wearing a dark suit without a tie, and plastic slippers, Ghosn rebutted the allegations against him point-by-point and said he had the option to leave Nissan but had decided to stay on. 'A captain doesn't jump ship during a storm,' he told the court in a strong voice.

The veteran auto executive, a familiar face at the World Economic Forum and other elite gatherings, was handcuffed and led into the courtroom with a rope around his waist as the hearing began. Officers uncuffed him and seated him on a bench.

Presiding judge Yuichi Tada then read out the charges and said Ghosn, a Brazilian-born Frenchman of Lebanese ancestry, was considered a flight risk — he was arrested on his arrival in Tokyo by private jet — and might try to hide evidence.

In Japan, suspects are routinely held without bail, often due to fears about evidence tampering. 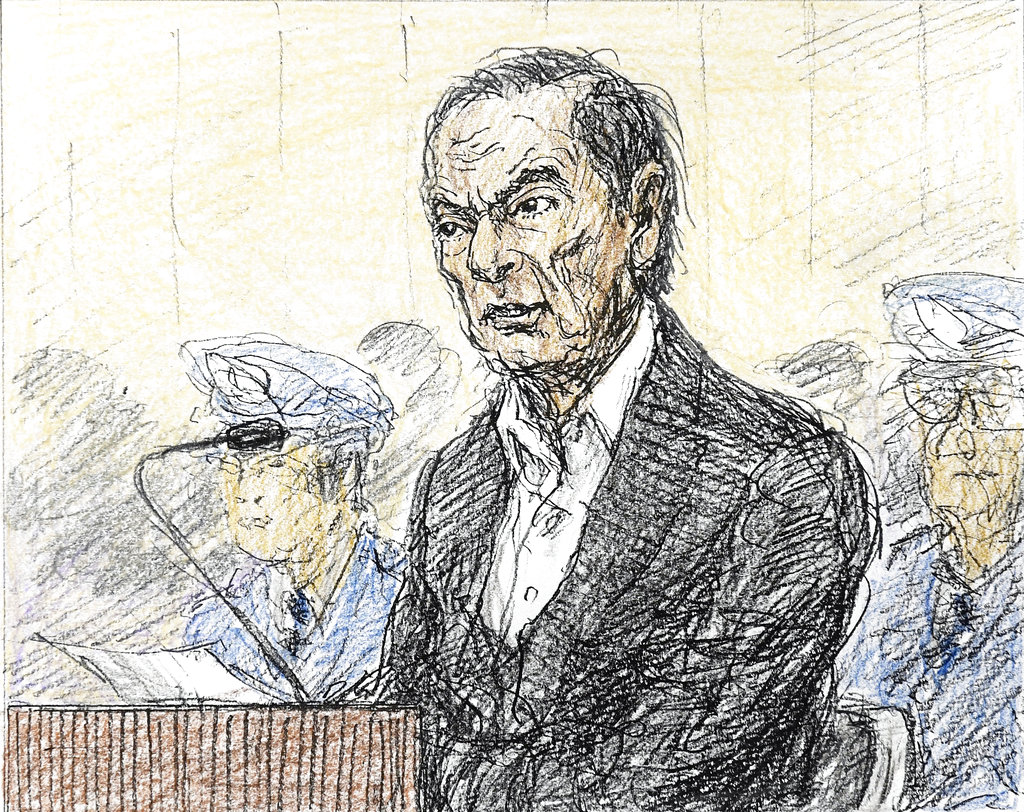 During Tuesday's hearing, Go Kondo, one of Ghosn's lawyers, argued he was not a flight risk.

'He's widely known so it's difficult for him to escape. There is no risk that the suspect will destroy evidence,' he said.

Facing the courtroom, Ghosn spoke proudly of the automaker's — and his own — achievements, such as reviving iconic models like the GT-R and the Z, expanding operations in China, Russia, Brazil and India and pioneering electric cars and autonomous driving. 'I have a genuine love and appreciation for Nissan,' he said.

Ghosn has been held in Spartan conditions at a Tokyo detention facility since he was taken into custody. In keeping with Japanese regulations, he has been allowed visits only from his lawyers and consular officials.

Ghosn said he had 'acted honourably, legally and with the knowledge and approval of the appropriate executives inside the company with the sole purpose of supporting and strengthening Nissan,' according to a statement released to some media including The Associated Press before the hearing, by people familiar with the case. They requested anonymity because of the matters' confidentiality.

'Contrary to the accusations made by the prosecutors, I never received any compensation from Nissan that was not disclosed,' his statement said.

Ghosn also defended payments questioned by prosecutors and by Nissan that were made to Khaled Juffali, a Saudi businessman. He said the money was paid to Juffali for real work that he did to sort out problems with a local distributor.

Before the hearing, the Khaled Juffali Company issued a statement saying the $14.7-million in payments over four years from Nissan 'were for legitimate business purposes in order to support and promote Nissan's business strategy in the Kingdom of Saudi Arabia and included reimbursement for business expenses'.

Ghosn said his personal investment losses stemmed from being paid in Japanese yen and that he had only asked Nissan to temporarily provide collateral for foreign exchange contracts. The company suffered no losses, he said.

Sent to Japan by Nissan's alliance partner Renault SA of France in 1999, Ghosn led a spectacular turnaround at the Yokohama-based automaker over two decades, during which he mostly served as chief executive.

Renault owns 43 per cent of Nissan, while Nissan owns 15 percent of Renault. The alliance, which in recent years has added smaller Japanese automaker Mitsubishi Motors Corp., has risen to be one of the most successful in the industry, rivaling Volkswagen AG of Germany and Japan's Toyota Motor Corp.

Ghosn remains the head of Renault and is still on Nissan's board of directors.

His courtroom appearance drew worldwide attention, with throngs of cameras set up outside the Tokyo Detention Center on Tuesday to capture his departure. No media cameras or audio recordings are allowed in Japanese court sessions.

Authorities also have arrested a fellow Nissan executive and aide to Ghosn, Greg Kelly, charging him with collaborating with Ghosn to underreport his income. Kelly, an American, was released on bail on December 25. He also has maintained his innocence.

Tokyo prosecutors have repeatedly extended Ghosn's detention by adding new allegations. The latest is suspicion of breach of trust stemming from the claim he had Nissan temporarily shoulder his personal investment losses.

Formal charges on those allegations have not been filed. No trial dates have been set for Ghosn or Kelly.

Nissan chief executive Hiroto Saikawa, who was hand-picked by Ghosn as his successor, has repeatedly declined to comment on the legal proceedings. But he has publicly denounced Ghosn, accusing him of using company assets and money for personal gain and of falsifying financial reports.

Nissan spokesman Nicholas Maxfield said an investigation by the company that found 'substantial and convincing evidence of misconduct' prompted prosecutors to act.

Ghosn's arrest has raised serious questions about the future of the Renault-Nissan alliance, but Nissan executives have said the alliance is intact.

Under Japanese law, falsifying financial reporting carries the maximum penalty of 10 years in prison, a 10 million yen ($89,000) fine, or both. But some experts have questioned the allegations against Kelly and Ghosn since Nissan itself, not individual executives, is responsible for filing such financial reports.