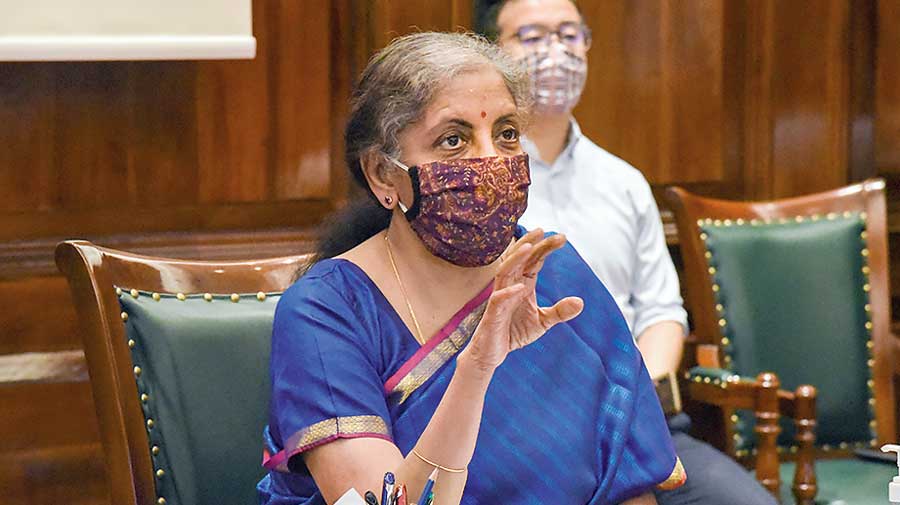 Finance minister Nirmala Sitharaman spoke of the possibility of another round of stimulus and said the Centre would come out with fresh growth and budgetary estimates for the pandemic-ravaged fiscal.

“I am not closed to the option of further stimulus package. Every time we have announced one, it has been after much deliberation and aimed at specific sections. If there is a need, further stimulus is an option I am open to,” Sitharaman said at the launch of the book Portraits of Power by  N.K. Singh, the chairman of the 15th Finance Commission.

The government had last week announced steps to stimulate consumer demand, including the advance payment of a part of the wages of central government employees during the festival season and more capital spending.

Analysts said the total fiscal stimulus from the government till date amounts to 1.5-2 per cent of the gross domestic product (GDP), with the package of last week just a piffling 0.2 per cent of GDP,

She said the Centre would revise the growth estimate and the budget figures for the fiscal.

“We have only now started doing some sort of assessment of the economy and budget numbers. We have had inputs now which are very different from July. Sometime, we will have to come out with a statement, whether I do it in public or in Parliament is what we have to decide,” she said.

At a separate event, the finance minister asked central public sector enterprises to complete 75 per cent of their planned capital expenditure for the fiscal by December itself.

Reviewing the performance of the PSUs, the finance minister  said capital expenditure needed to be scaled up for the current and the next fiscal year as it a “critical driver for economic growth”.

She held a virtual meeting with the secretaries of oil and coal along with the chiefs of 14 PSUs associated with the ministry. In the fourth such meeting with her, Sitharaman sought greater co-ordination at the secretary-level of the concerned ministries and the heads of PSUs to achieve the targets, a finance ministry statement said.

The ministry data showed the PSUs to have spent just one-third of their targeted capital expenditure in the first six months of the fiscal.

It further said the achievement in the first half of the current financial year stood at Rs 37,423 crore (32 per cent of the target), while it was Rs 43,097 crore (39 per cent) in the previous financial year.

She said the better performance of PSUs can help the economy to recover in a big way from the impact of Covid-19. The capex review of PSUs is carried out jointly by the department of economic affairs and the department of public enterprises

India has asked at least eight state-run companies to consider share buybacks in the fiscal year that runs through March 2021, two government officials said, as New Delhi scours for ways to raise funds to rein in its fiscal deficit, according to Reuters.

The firms asked include Coal India, NTPC, minerals producer NMDC and Engineers India Ltd, said one of the sources.

The government is unlikely to be anywhere near its fiscal deficit target of 3.5 per cent of GDP for 2020-21 as coronavirus curbs hit tax collections and delayed efforts to privatise BPCL and Air India.