On the table is a 1.8-trillion-euro package for the next long-term budget and a recovery fund to haul Europe out of its deepest recession since WWII 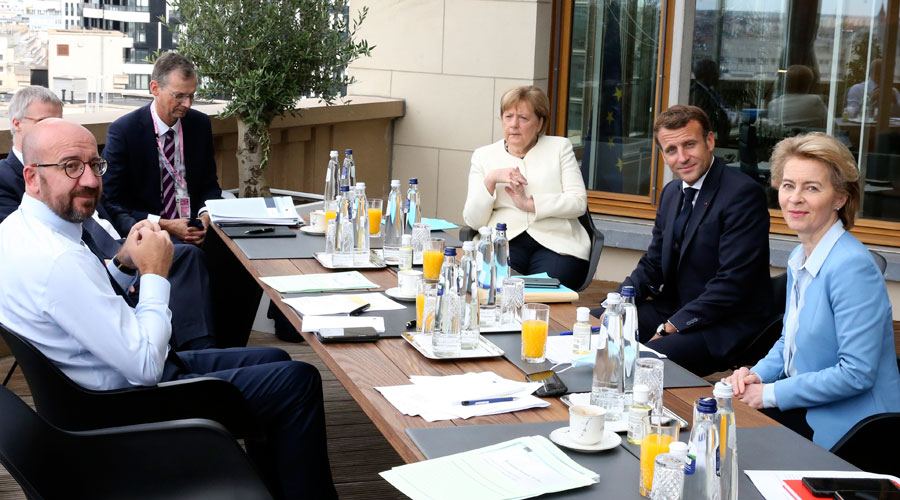 A European Union plan to breathe life into economies throttled by the coronavirus pandemic hung in the balance on Sunday as leaders quarrelled over the level of spending on the third day of a summit.

The resumption of negotiations in Brussels was delayed until at least 4pm (1400 GMT), while the 27 EU member states sought a compromise to win over “frugal” wealthy northern countries.

German Chancellor Angela Merkel said an agreement might be beyond their reach. Austrian Chancellor Sebastian Kurz said later that a deal was in reach but there was still “a way to go” at a summit where participants wore protective face masks.

On the table is a 1.8-trillion-euro ($2.06-trillion) package for the EU’s next long-term budget and a recovery fund to haul Europe out of its deepest recession since World War Two.

The proposed 750-billion-euro recovery fund, which is to be raised on capital markets by the EU’s executive European Commission, would be funnelled mostly to hard-hit Mediterranean rim countries.

Sticking points are the size of the fund and the split between grants and repayable loans, with the “frugals”, led by the Netherlands, trying to limit it in talks that underscore the gulf between the EU's north and south.

The summit also faced difficulty agreeing on rebates from the EU budget for rich net-payer countries, and on a proposed new rule-of-law mechanism that could freeze funding to countries flouting democratic principles.

Greek Prime Minister Kyriakos Mitsotakis, whose country was recovering from a 10-year debt crisis when the pandemic hit, made a plea for unity, saying the EU could not afford to look “divided or weak”.

For some, the summit is a “make-or-break” moment for nearly 70 years of European integration, and failure to agree amid an unprecedented health and economic crisis would raise serious questions about the viability of the block.

There was speculation among EU diplomats that talks could run into Monday, though they said another summit later in July was more likely if there was no deal.

Late on Saturday, Merkel and French President Emmanuel Macron left the day's final informal talks early, refusing to accept that the level of free grants to ailing economies in the package fall below 400 billion euros.

Italian Prime Minister Giuseppe Conte had earlier accused the Netherlands and its allies, Austria, Sweden, Denmark and Finland, of "blackmail".

Dutch Prime Minister Mark Rutte's position reflects political realities at home, where voters resent that the Netherlands is, proportionately, among the largest net contributors to the EU budget.

Rutte lacks a parliamentary majority and his conservative VVD party faces a strong challenge from far-right eurosceptic parties in elections next March.

Hungary - backed by its eurosceptic ally Poland - has threatened to veto the package over the rule-of-law mechanism, supported by the Dutch.

Orban said Rutte had a personal grudge against him.

"I don't know what is the personal reason for the Dutch prime minister to hate me or Hungary, but he is attacking so harshly ... I don't like blame games but the Dutchman is the real responsible man for the whole mess," Orban told reporters.