Container freight station service providers are looking at value-added services and improved efficiencies through technology adoption to protect their margins after the implementation of a direct port delivery system at the major ports of the country. 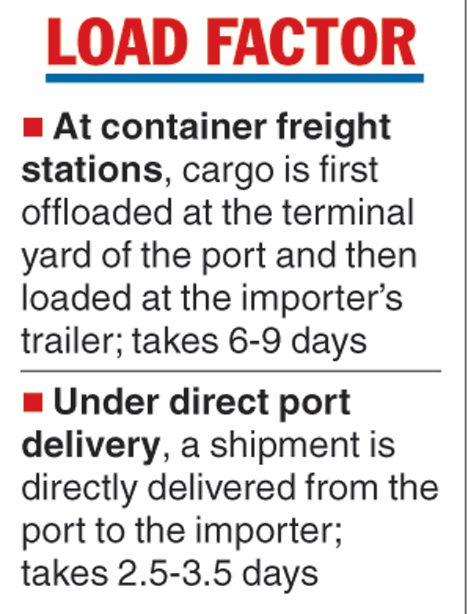 Calcutta: Container freight station service providers are looking at value-added services and improved efficiencies through technology adoption to protect their margins after the implementation of a direct port delivery system at the major ports of the country.

Under direct port delivery, a shipment is directly delivered from the port to the importer instead of initially holding it at the container freight station (CFS).

According to industry estimates, a CFS-bound cargo generally takes 6-9 days between offloading and stacking at the terminal yard of the port to loading the container at the importer's trailer for delivery. The number of days comes down to around 2.5-3.5 days under direct port delivery.

A CFS, which is essentially an off-dock facility, helps to decongest the ports by shifting container cargo.

CFS charges include rentals, transportation and handling, besides miscellaneous charges such as infrastructure support and monitoring. However, with direct port delivery, large importers are increasingly going for this mechanism to cut down on the dwell time - the time a container remains at the in-transit storage for evacuation by rail or road.

This has affected some of the business of the estimated Rs 4,500-crore-plus CFS industry operated through around 170 stations in the country.

Even public sector undertakings such as Balmer Lawrie, engaged in the CFS business, have pointed out direct port delivery as a major concern.

"The company has three CFSs at Nhava Sheva (Navi Mumbai), Chennai and Calcutta. Although, the import volume in the three ports of JNPT, Calcutta and Chennai improved 2.3 per cent, the volumes moved to the freight stations from the port in these three cities went down by 4 per cent during 2017-18 over the previous year. The main reason for the negative growth was the implementation of direct port delivery at Nhava Sheva and Chennai locations," Balmer Lawrie said in its annual report of 2017-18.

CFS operators are now increasingly looking to expand their service base to retain customers.

"CFS operators will have to adopt offering value added services through end-to-end solutions, including logistics support through different tie-ups and higher efficiency through technology adoption for faster loading and unloading support for its customers," said Ashutosh Jaiswal, president, eastern chapter of the National Association of Container Freight Stations.