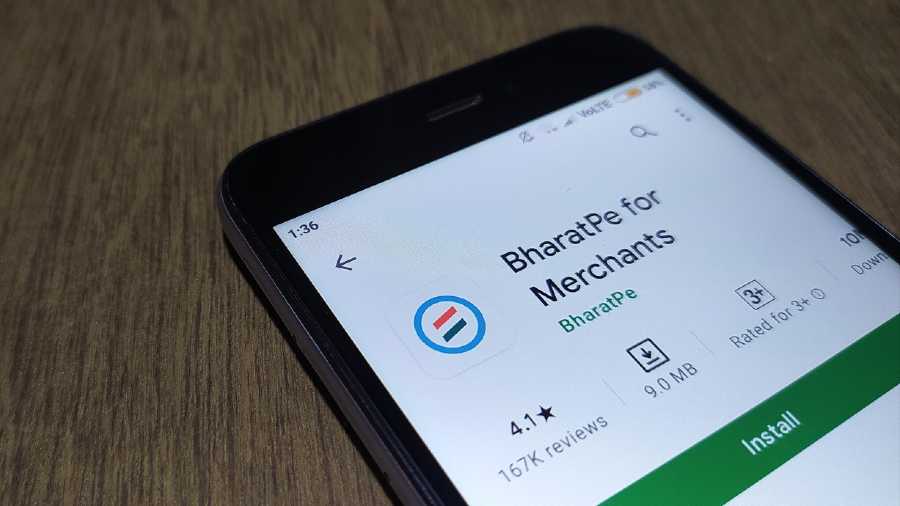 BharatPe announced that Ashneer Grover had proceeded on voluntary leave till the end of March.
Shutterstock
Our Special Correspondent   |   Mumbai   |   Published 30.01.22, 01:03 AM

BharatPe, the digital payments firm, has appointed risk consulting firm Alvarez and Marshal to carry out an independent audit of its internal processes and systems as rumours swirled about serious governance issues and questionable transactions involving co-founder Ashneer Grover and his wife Madhuri Jain Grover. Reponding to reports, BharatPe clarified that it has not terminated the services of any employee.

Controversy engulfed the fintech firm recently after an audio clip was circulated in which Grover apparently threatened an employee of Kotak Wealth Management for refusing to finance his bid to scoop up shares of FSN E-Commerce Ventures Ltd, which owns the fashion retailer Nykaa, during the initial public offering last November.

Grover has called it a ‘fake’ audio clip but it soon snowballed into a rash of lawsuits.

Kotak Mahindra Bank decided to pursue “legal action” against Grover and his wife Madhuri in connection with the alleged abusive call.

In retaliation, Grover and his wife sent a legal notice to Kotak Mahindra Bank and its top executives that included MD & CEO Uday Kotak for not providing IPO financing.

The latest development indicates that the Grovers may be in deeper trouble over suspicions of financial fraud which are now being investigated. This however, could not be confirmed.

On January 19, BharatPe announced that Grover had proceeded on voluntary leave till the end of March. His wife Madhuri Grover, who is the head of controls at BharatPe, has also gone on leave. There are now unconfirmed reports that Grover is unlikely to return to the fintech firm.

“BharatPe, through its legal firm, Shardul Amarchand Mangaldas, has appointed Alvarez and Marsal, a leading management consultant and risk advisory firm to advise the Board on its recommendations. The Board strongly believes in protecting interests of all stakeholders, including customers, employees and partners," a statement from the firm said.

The statement added that its board is committed to the highest standard of corporate governance and that an independent audit is being conducted with regard to its internal processes and systems.

According to a Reuters report, the audit will assess if BharatPe’s senior executives are making proper internal disclosures about personal investments and check for conflicts, leading to a new code of conduct.