Advertisement
Home / World / Why is Austria detaining so many South Asian migrants?

Why is Austria detaining so many South Asian migrants?

Austria has detained over 68,000 irregular migrants and asylum-seekers since imposing strict border controls in May to reduce 'smuggling and asylum abuse' 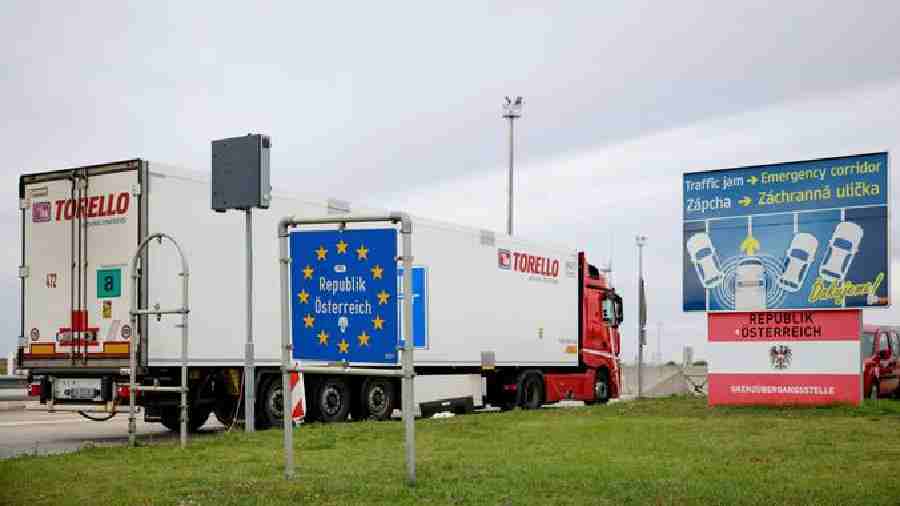 Stricter measures have led to an uptick in migrant detentions in Austria despite many not wanting to stay in the country
Deutsche Welle
Arafatul Islam   |   Published 11.10.22, 09:32 PM

The Austrian Interior Ministry's decision to impose targeted border controls to curb smuggling and asylum abuse has led to the detention of 68,800 migrants and asylum-seekers who have tried to enter the central European country through irregular means in the past five months.

The majority of the migrants, 46,000 in number, were picked up by police in Burgenland, the easternmost Austrian state that borders Hungary, Slovenia and Slovakia.

The migrants mainly came from Afghanistan, India, Syria, Tunisia and Pakistan, according to Gerhard Karner, the interior minister of the EU member state.

Around 56,000 asylum applications were filed in Austria from January to August this year, Karner said at a press conference in Vienna on Monday.

"These applications were mostly made by people who had practically no chance of asylum," he added.

Many are coming from India

Gerhard Karner pointed out that many of the migrants who came recently to his country through irregular routes are from India, a relatively peaceful South Asian country in terms of security compared to neighboring Pakistan and nearby Afghanistan.

"Their [asylum] request had no chance," he said, adding: "Not a single positive asylum decision has been issued yet."

Around 7,600 Indians have applied for asylum in the country, according to the Austrian government's statistics. But Afghans top the list with 12,000 asylum applications recorded, a surge related to the Taliban's takeover of the country last year.

DW met several Indian migrants at a refugee camp in Serbia earlier this year, who said that they had flown to the Balkan country with the benefits of a visa-free agreement between Belgrade and New Delhi. Serbia is the only European country that has allowed visa-free entry for Indian citizens since 2017.

The migrants, who left India for economic reasons, were waiting to cross into the EU through irregular routes to reach countries like Italy, France and Germany.

"I was unemployed in India. There's no job for me even though I'm educated. That's why I decided to come to Serbia with the hope to reach Germany, Italy or France to settle my life there," Jasbir Singh, a 27-year-old migrant from India's northern state of Punjab, told DW.

Shahanaz Parven, an independent migration researcher based in Krems, Austria, also noticed a surge in Indian migrants through the Balkan route.

"Most of the Indian irregular migrants reach Europe for economic reasons, and some of these are a direct consequence of climate change. This is the case of the laborers that are displaced by floods in the areas surrounding water bodies, which leads to the eradication of the means of livelihood for those laborers and their families," she told DW.

"Skilled migrants, too, are included among the displaced persons. Upon reaching Europe in an undocumented manner, their access to the skilled labor market is prevented, which leads them to accept unskilled jobs," Parven added.

Is Austria a transit country?

Mohammad Jamir, who asked not to reveal his real name, is a Bangladeshi migrant who was arrested by Austrian police last month along with dozens of other migrants from India and Pakistan during their attempt to reach Italy from Romania by hiding in a covered van. He told DW that none of them were interested in seeking asylum in Austria.

"I have come to Romania with a valid work visa that cost me around €7,000 ($6,800). But the company that was supposed to employ me didn't give me any work. After that, I decided to move to Italy with the help of a smuggler. But Austrian police arrested us while crossing into the country," he told DW.

The migrants were later transferred to a refugee camp in Traiskirchen. Jamir said he had paid around €4,000 to a smuggler to arrange his trip from Romania. Thirty-one other migrants from South Asia accompanied him on the journey. Human smugglers often hide undocumented migrants in lorries and covered vans to transport them from Serbia and Romania to western EU countries. Those vehicles mainly pass through Hungary and Austria and end up in Italy, the prime destination for most undocumented migrants.

Parven thinks that the irregular migration route has been interrupted by Austria recently, which led to an increase in undocumented migrants being picked up in the EU state.

"The Austrian government has recently enacted measures for border control that imply the verification of travel documents for all vehicles, including those that the migrants take to cross the border," she told DW.

The Austrian interior minister also said that the people who were trying to take irregular routes to the EU were being abused by smugglers. "Migrants are charged €3,000 to €7,000 for irregular entry," Karner has said.

Since the beginning of May, 440 human smugglers have been arrested in Austria, 172 of them in Burgenland, according to Austrian government officials. The number was 441 throughout the previous year, and in 2020 only 311 traffickers were arrested.

Meanwhile, Austria and Hungary have decided to help Serbia to curb migrant crossings at its southern border.

Hungarian Foreign Minister Peter Szijjarto sees an "explosion" in the number of people entering European countries without authorization in recent months. He said Hungary and Austria would supply Serbia with equipment and personnel to better secure its border with North Macedonia.

"It's our common interest to move the defense line toward the south, and that is why we agreed to join forces," Serbian media quoted Szijjarto as saying after delegations from the three countries met in Belgrade last week.

Serbian President Aleksandar Vucic has also promised that Belgrade would align its visa policies with the EU to stop the country's visa-free arrangements with some countries from being used for unauthorized migration.