Advertisement
Home / World / Watergate: How a scandal produced a suffix

Watergate: How a scandal produced a suffix

The UK's Partygate, the US' Nipplegate and Germany's Dieselgate all owe their names to a politically motivated break-in that rocked Washington 50 years ago 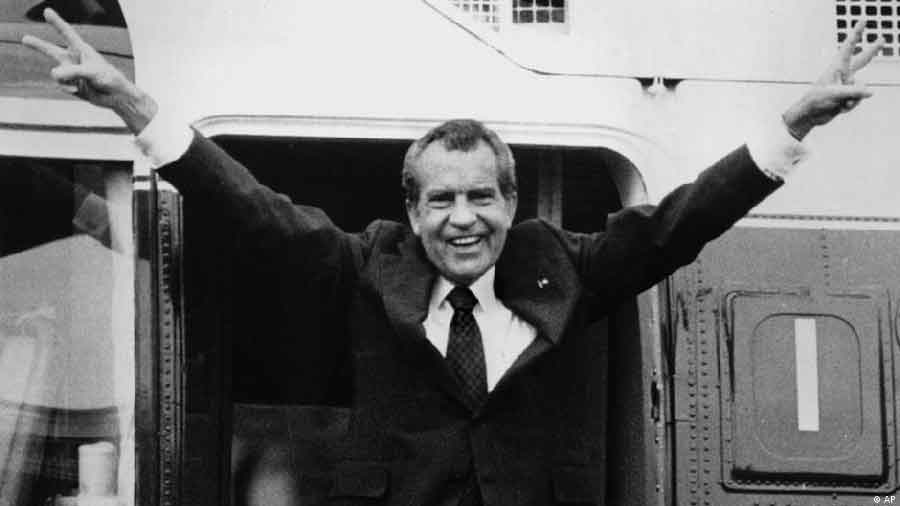 On June 17, 1972, during a presidential election year in the US, five men broke into the Democratic National Committee (DNC) headquarters at the Watergate complex in Washington.

Their mission? To bug the DNC's offices with listening devices so as to obtain incriminating material that could undermine Democratic candidate Senator George McGovern and thus ensure President Richard Nixon's reelection.

After the news of the burglary broke, early media reports suggested there could be a link to the White House. But Nixon maintained he had no knowledge of the affair and went on to win reelection in November. In January 1973, the perpetrators were tried and sentenced for the break-in.

Subsequent investigations eventually implicated Nixon's campaign committee and members of his administration, and revealed that the president himself had been aware of the action and involved in its cover-up. To avoid impeachment and removal from office, Nixon became the first — and only — US president to resign, finally stepping down on August 8, 1974.

Repeated mentions in the media of the word "Watergate" during a controversy that went on for years made it synonymous not only with the break-in site but also with scandal itself.

Why the name 'Watergate'?

Now an architectural landmark listed on the US National Register of Historic Places, the perhaps most-infamous address in the US was originally named so for pragmatic reasons.

Completed in 1971, the Watergate Complex was the first mixed-used development in Washington. Sitting on the banks of the Potomac River, it consisted of office buildings, a hotel, and residential blocks, and in its heyday it was the preferred residential address among politicos.

In his 2009 book Presidential Power on Trial: From Watergate to All the President's Men, William Noble wrote that the complex "got its name from overlooking the 'gate' that regulated the flow of water from the Potomac River into the Tidal Basin at flood tide."

Shorthand for scandalsToday, '-gate' has become a default suffix for any controversial, headline-making event, from the political to the frivolous.

The suffix was first used shortly after the Watergate scandal, when the American magazine National Lampoon published a satirical story on a fake Russian scandal and dubbed it "Volgagate."

Notably, former Nixon speechwriter William Safire often used the suffix in his columns for The New York Times when writing on post-Nixon scandals during his 30-year career at the newspaper. He later admitted that he had done so to deflect criticism of his former boss' wrongdoings.

Other infamous "-gates" involving US presidents include "Monicagate"/"Lewinskygate" in the late 90s, when President Bill Clinton first denied and then admitted to having an affair with White House intern Monica Lewinsky.

Then there was "Ukrainegate" in 2019, in which President Donald Trump asked Ukrainian President Volodymyr Zelenskyy to investigate Hunter Biden, Joe Biden's son, with the aim of obtaining information that would be damaging to Biden senior in the upcoming 2020 presidential election.

But the suffix's impact has reached beyond US borders and even beyond the English language.

France had "Winegate" in 1973, when a fraudulent scheme saw cheap wine being passed off as expensive Bordeaux.

"Valijagate," in 2007, involved Venezuelan-American entrepreneur Guido Antonini Wilson arriving in Argentina on a private flight hired by Argentine and Venezuelan state officials while carrying $800,000 in cash, which he failed to declare. Valija is Spanish for suitcase.

Germany had "Dieselgate" which started in 2015, when German carmaker Volkswagen admitted to having installed emissions-cheating devices in its vehicles. The revelation and subsequent investigations had global implications for the company; following six-figure settlements and fines in the US, it recently agreed to pay 193 million pounds sterling (€227 million; $242 million) as part of an out-of-court settlement in a class action suit brought by some 91,000 drivers in the UK.

Italy, meanwhile, took a leaf out of the book and fashioned its own suffix. An early 1990s scandal that involved politicians receiving kickbacks in exchange for public works contracts was christened "Tangentopoli" — "tangente" being "bribe" and "poli" coming from the Greek "polis," meaning "city." Ensuing scandals were affixed with "poli," such as the mid-2000's Bancopoli, referring to finance and banking scandals; and "Calciopoli," a match-fixing scandal involving Italy's top professional football league. "Calcio" is Italian for football.

Some grammarians and critics deem it tiresome when the media appends the "-gate" suffix to any controversy, which could trivialize the gravity of some wrongdoings compared to others.

In recent examples, the UK's "Partygate" — in which government-sponsored parties took place that flouted rules during the nationwide COVID-19 lockdowns — isn't the equivalent of "Slapgate," when actor Will Smith slapped 2022 Oscars host, Chris Rock, after the latter joked about Smith's wife, Jada Pinkett-Smith, and her alopecia condition.

However, others argue that "-gate" has acquired a certain gravitas, and that appending it to an issue raises people's antennas.

"Its usage within journalism is so pervasive that people with no knowledge of the Watergate scandal would have no problem understanding what was meant by a word like Bloodgate," said Ian Brookes, a consultant editor on the Collins English Dictionary, to the BBC in 2013.

Described as "rugby's biggest scandal," Bloodgate happened in 2009 when the English rugby team the Harlequins played against the Irish Leinster side. An English player faked an injury by biting on a fake blood capsule, facilitating a switch with a teammate in hopes of scoring a win.

Whether loved or reviled, "-gate" has been — and will certainly remain — a fixture in language for scandals of all sorts.

A 2010 BBC comedy skit from "That Mitchell and Webb Look" did raise a point about use of this suffix.

If "-gate" is to be a standalone suffix denoting impropriety of any sort, shouldn't the scandal that started it all be then called "Watergate-gate"?

Watergate@50: hope in the pursuit of truth