50 years of Watergate: Bob Woodward and Carl Bernstein on great moments of journalism

What does the Nixon-era political conspiracy mean today? That there’s hope as long as there is the pursuit of truth 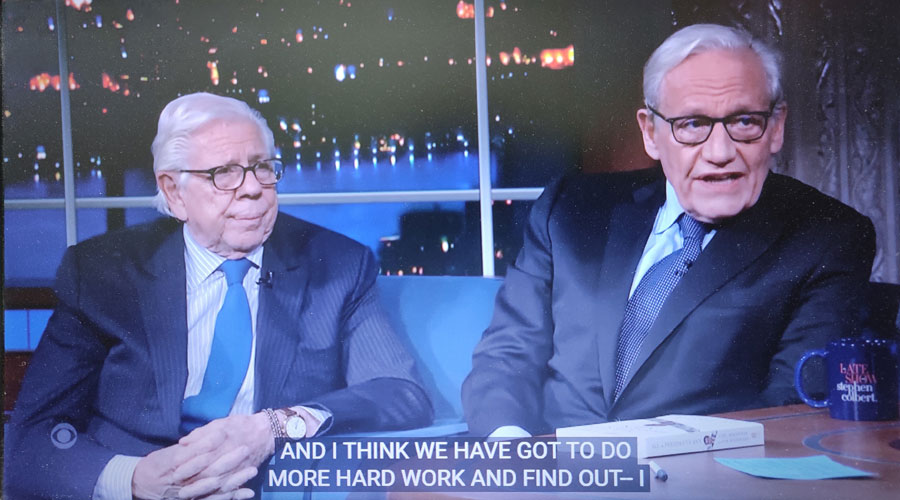 If Watergate is at the pinnacle of journalism, a hallowed tribute to its avowed mission of relentless pursuit of the truth, 50 years after the unravelling of the greatest political conspiracy that led to the resignation of President Richard Nixon also bookends, reassuringly, several key triumphs.

Some stories from that “great moment of journalism” _ stuff of lore in today’s insta-age _ were revealed days ago by Bob Woodward and Carl Bernstein no less, the two legendary reporters of The Washington Post whose dogged pursuance of what began with a break-in at the Democratic National Committee headquarters housed in that Potomac riverside building in Washington DC on the night of June 16-17, 1972, started it all.

On its 50 anniversary, the duo recalled with emotion at Stephen Colbert’s Late Show, two instances of how the paper and its custodians stood by them. One, when Woodward was having lunch with Katherine Graham, the then publisher/owner of The Post asked him when the whole truth of the Watergate affair would come out. And two, Bernstein’s conversation with editor Ben Bradlee just when a messenger was waiting at the reception with a subpoena, asking them to hand over all their notes of their investigation from the Democratic committee office at Watergate.

Woodward says he had to be honest with Graham, and ended up conveying his despondency by uttering the word, “Never”. She then turned to him and grabbed his arm and said, “Don’t. Tell. Me. Never.” In other words, she just told him to get to work. Dig some more. Find the truth.

Bernstein reveals another aspect of Graham, who as publisher and owner of The Post had been under tremendous pressure from the Nixon administration to relent, cease and desist and rein in her reporters. Upon hearing about the awaiting server of the subpoena, Bradlee asked Bernstein to ensure that the man didn’t leave the building. He then rushed up to Graham’s office, only to be back moments later to tell Bernstein what the paper had decided to do. “Katherine says they are not your notes. They are her notes. And if anybody is going to go to jail it’s going to be her,” Bernstein quotes Bradlee as telling him. “It’s one of those great moments in journalism,” he tells Colbert who had invited them on his show to commemorate 50 years of their book, All The President’s Men, and discuss the future of American democracy in the backdrop of Congressional hearings probing Donald Trump and his advisors’ efforts to overturn the 2020 election verdict.

Their story: The newspaper owner, the journalists and the editor

Katherine Graham’s moment of reckoning had, however, occurred about a year earlier to Watergate, when she was faced with the decision on whether to publish the Pentagon Papers, a 47-volume, 7,000-page top secret study of America’s military and political involvement in Vietnam from 1945-1967. Till then a happy and content homemaker and mother of four, she was thrust into the job after the suicide of her husband, the famous Phil Graham. It fell on her to take the final call, a decision on which would hinge the very existence of the paper.

We all know how that went. The Post published and the Supreme Court ruled in favour of the Fourth Estate’s right to publish, the denouement yet another journalism high-point. She later explained why she did what she did, even while facing the risk of losing the company she inherited, in her expansive Pulitzer Prize winning memoir, Personal History, stressing on the “public’s business” as being at the core of the job The Post was into. “...the material in the Pentagon Papers was just the kind of information the public needed in order to form its opinions and its choices more wisely. …we regarded their publication not as a breach of the national security, as the administration claimed, but, rather, as a contribution to the national interest - indeed, as the obligation of a responsible newspaper."

Not losing sight of a news organisation’s mission is perhaps less complex for an editor. The stark black and white demarcation of truth and falsehood is the only consideration. "Failure to publish without a fight would constitute an abdication that would brand The Post forever, as an administration tool of whatever administration was in power," he wrote about the saga of the Pentagon Papers in his memoir, A Good Life: Newspapering and Other Adventures.

So when Watergate happened, Katherine Graham’s resolve had perhaps been better defined, if not steeled. She was no longer the unsure woman who had been thrust into a job by circumstance. She knew what needed to be done. Her son Donald, who was publisher of The Post from 1979 to 2000 and served as chairman and CEO of the company till 2013, summarises it succinctly. “My mother, never the world capital of self-confidence, stood up for her newsroom. Her faith in her editors and reporters turned out to be a central part of the Watergate story,” he writes in a commemorative opinion piece for The Washington Post.

In 2022, what is the lesson that Watergate holds? Colbert volunteers his conclusion, as eloquently as ever. There is hope as long as there is the pursuit of truth. Only, we need to be open to it.