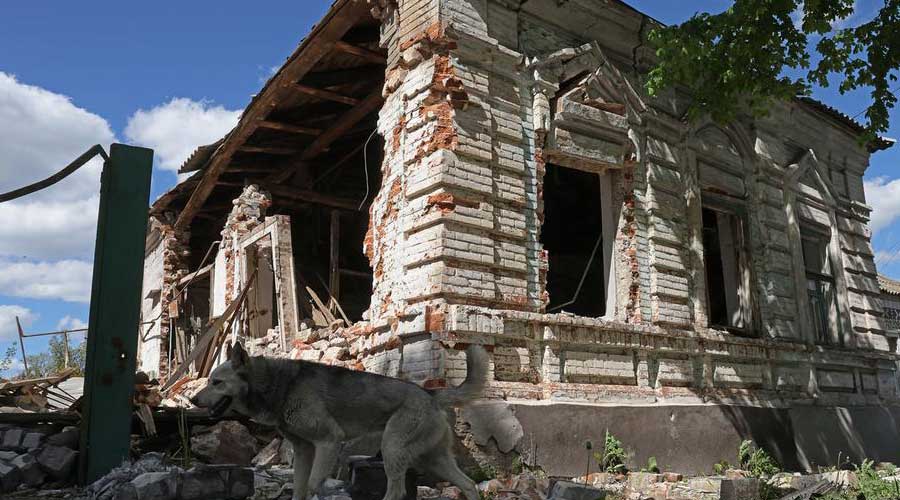 Repairing the destruction in cities like Mariupol could take years and cost billions
Deutsche Welle
Deutsche Welle   |   Published 23.05.22, 11:33 AM

World Economic Forum president Borge Brende has called for a "Marshall Plan" to rebuild Ukraine as the annual meeting in Davis kicks off. Brende said reconstruction should go ahead with or without a peace settlement.

This article was last updated at 10:42 IST

The UK Ministry of Defence said that Russia has likely lost as many soldiers during the first three months of the Ukraine war as the Soviet Union lost during its nine-year intervention in Afghanistan.

Soviet forces lost about 15,000 soldiers during the Afghan war. Some 9,500 fell in battle and the rest died due to wounds, diseases and accidents.

The UK attributed the staggering death toll to poor tactics, limited air cover, the lack of flexibility of Russian forces and a command structure more prone to reinforcing errors than adapting to circumstances.

Ukraine is set to issue the country's first war crimes verdict since the start of Russia's invasion.

A 21-year-old Russian soldier testified to shooting a civilian in the Chupakhivka village in the northeastern Sumy region. The soldier said that he carried out the shooting on orders from his superiors.

The prosecution has asked for life imprisonment. The defense has argued for acquittal on the basis that the soldier was carrying out an order.

The soldier told the court that he was ready to face consequences.

"I regret it. I regret it very much. I did not refuse and I am ready to accept any measures imposed," he said in closing remarks at the trial.

The number of displaced people in the world has surpassed 100 million for the first time, UN High Commissioner for Refugees (UNHCR) Filippo Grandi said.

Russia's invasion has displaced 8 million people internally within Ukraine, and another 6 million have been registered as having left Ukraine.

UNHCR data shows that the number of displaced people reached around 90 million people in 2021.

"One hundred million is a stark figure — sobering and alarming in equal measure. It's a record that should never have been set," Grandi said.

"This must serve as a wake-up call to resolve and prevent destructive conflicts, end persecution, and address the underlying causes that force innocent people to flee their homes."

"The international response to people fleeing war in Ukraine has been overwhelmingly positive," Grandi said. "Compassion is alive and we need a similar mobilization for all crises around the world. But ultimately, humanitarian aid is a palliative, not a cure."

Ukraine and Poland have agreed to a joint border customs control and work on a shared railway company.

The cooperation was announced by Ukrainian President Volodymyr Zelenskyy and Polish counterpart Andrzej Duda during a meeting in Kyiv on Sunday.

"The Polish-Ukrainian border should unite not divide," Duda told lawmakers in the Ukrainian parliament. Poland's president is the first foreign leader to give a speech in person in the Verkhovna Rada since the start of the invasion.

Ukraine's infrastructure minister, Oleksander Kubrakov, said that the two countries were working on easing transport of Ukraine's goods to the European Union.

"We are also working on the creation of a joint venture railway company to increase the export potential of the Ukrainian economy," Kubrakov said.

Also during his visit to Kyiv, Duda told lawmakers that Ukrainians who fled the war into Poland were "not refugees to us," instead saying they were Poland's "guests."

Duda also said Ukraine needed to be rebuilt "at the cost of the aggressor" and that he would not rest until Ukraine becomes an EU member.

The Marshall Plan was a US initiative that supported the rebuilding of several European economies following World War II.

"Even without a peace agreement, which is currently not very likely, we must work on reconstruction, at least in those areas that are under Ukrainian control," Brende told the Süddeutsche Zeitung on Monday.

"We need a Marshall Plan for Ukraine."

Brende said that he would like to push for such a plan at the World Economic Forum in Davos, which begins on Monday.

According to Brende, Ukraine is not the only worry the global economy is faced with.

"It is also climate change. It is also that the global growth is slowing," Brende told the Associated Press. "There's no business as usual."

Brende said that "we have to avoid that this very weak recovery ends with a new recession because we have very limited ammunition to fight a new recession."

"A new recession will lead to increased unemployment, increased poverty," he said. "So much is at stake."

Originally scheduled to take place in late January, travel restrictions amid the emergence of the omicron COVID variant prompted organizers to delay the event.

Summary of events in Ukraine-Russia crisis on Sunday

Moscow's lead negotiator said Russia is ready to resume peace talks with Ukraine but the initiative must come from Kyiv.

Ukraine ruled out for a second time a cease-fire or any territorial concessions to Moscow. Presidential chief of staff Andriy Yermak said that "the war must end with the complete restoration of Ukraine's territorial integrity and sovereignty."

Russia said it plans to put about 50 new nuclear-capable Sarmat intercontinental ballistic missiles into service by the end of the year.

France's State Secretary for European Affairs Clement Beaune said that Paris does not want to offer Ukrainians "any illusions or lies" about their way into the European Union. "[Ukrainian EU accession] is probably in 15 or 20 years, it takes a long time."

The crowd at a rock concert in St. Petersburg was recorded chanting an anti-war slogan on Friday. In a video that spread across social media, the crowd is heard chanting "f--- war!" during a concert of the Russian band Kiss Kiss.

German Chancellor Olaf Scholz, visiting Senegal as part of a tour of Africa, promised help to deal with rising food prices and missing deliveries from Ukraine, and said Europe would be a willing customer for the liquid natural gas reserves Senegal recently started trying to exploit.

With the Ukraine war about to enter its fourth month, the country's parliament prolonged general mobilization for another 90 days.