US: Tornado swarm kills more than 80

The death toll could reach up to 100 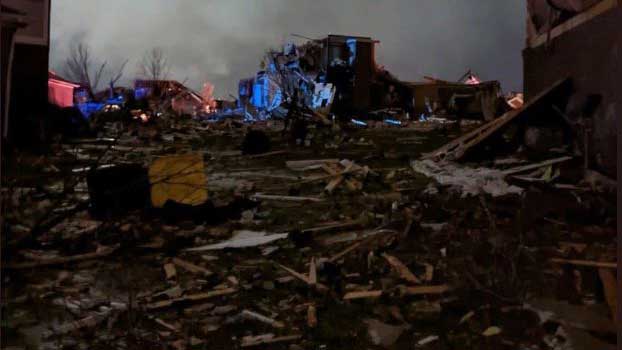 A devastating swarm of tornadoes ripped through Kentucky and five other US states, killing more than 80 and leaving a trail of destroyed homes, factories and warehouses along a path that stretched more than 200 miles, officials said on Saturday.

President Joe Biden described the fatality asa "one of the largest" storm outbreaks in history.

"It's a tragedy," a shaken Biden said in televised comments. "And we still don't know how many lives are lost and the full extent of the damage."

At least four tornadoes touched down overnight in parts of Kentucky, causing significant damage in more than a dozen counties. The primary tornado travelled more than 365km across the state, Kentucky governor Andy Beshear said.

The death toll could exceed 50 people and could reach up to 100, he told an early morning news conference.

“The reports are really heartbreaking,” he said. “This has been one of the toughest nights in Kentucky history and some areas have been hit in ways that is hard to put into words.”

Some of the worst destruction was in Mayfield, a small city of about 10,000 people in the far western part of Kentucky, where the state converges with Illinois, Missouri and Arkansas.

About 110 people were inside a candle factory in the area when the tornado ripped through, bringing down the roof and causing mass casualties, Beshear said.
Kyanna Parsons-Perez, who was inside the factory, said the roof collapsed soon after the workers could hear and feel the hollowing winds and the lights began flickering.

“We could feel the wind ... then we did a little rock,” Parsons-Perez told NBC. “And then boom everything came down on us.”

Video and photos posted on social media but not yet verified as authentic by Reuters showed brick buildings in downtown Mayfield reduced to rubble, with parked cars nearly buried under bricks and debris. The steeple on the Graves County courthouse in Mayfield appeared to have been toppled, photos on Twitter showed.

In the early hours, more than 56,000 people in Kentucky were without power, Beshear said. He declared a state of emergency and was deploying dozens of national guardsmen.

The genesis of the tornado outbreak was a series of overnight thunderstorms, including a super cell storm that formed in northeast Arkansas. That storm moved from Arkansas and Missouri and into Tennessee and Kentucky.

“Unfortunately it produced a couple of deadly tornadoes along the way. One of them may have been a long-track tornado,” Storm Prediction Center meteorologist Roger Edward said. “The killer tornado was part of that.”

One person was killed and five seriously injured when a tornado tore through a nursing home with 90 beds in Monette, Arkansas, a small community near the border with Missouri, according to Craighead county judge Marvin Day.

“It just took a direct hit from the tornado,” Day told Reuters. “We were very blessed that more people weren't killed or injured in that. It could have been a whole lot worse.” A few miles away in Leachville, Arkansas, a tornado destroyed a Dollar General Store, killing one person, and laid waste to much of the city’s downtown, according to Lt. Chuck Brown of the Mississippi County Sheriff's Office in Arkansas.

”It really sounded like a train roaring through town.”

In Illinois, police said there were“confirmed fatalities” after a roof partially collapsed at an Amazon.com Inc warehouse in the town of Edwardsville late on Friday.

Rescue workers were searching for people trapped in the rubble.

Drone footage of the warehouse showed a chaotic scene in the early morning dark, with many emergency vehicles around the area and rescuers with flashlights combing through debris.

The roof appeared to have been peeled back off the metal skeleton of the building.

In Tennessee, the severe weather killed at least three people, said Dean Flener, spokesman for the state's Emergency Management Agency. Flener said two died in Lake County and one in Obion County, but did not have any information about the circumstances of the deaths.

The storms caused a CSX company freight train to derail in western Kentucky, although it said no injuries were reported, the New York Times said.

With inputs from NDTV