US to designate Iran Revolutionary Guard a terrorist group 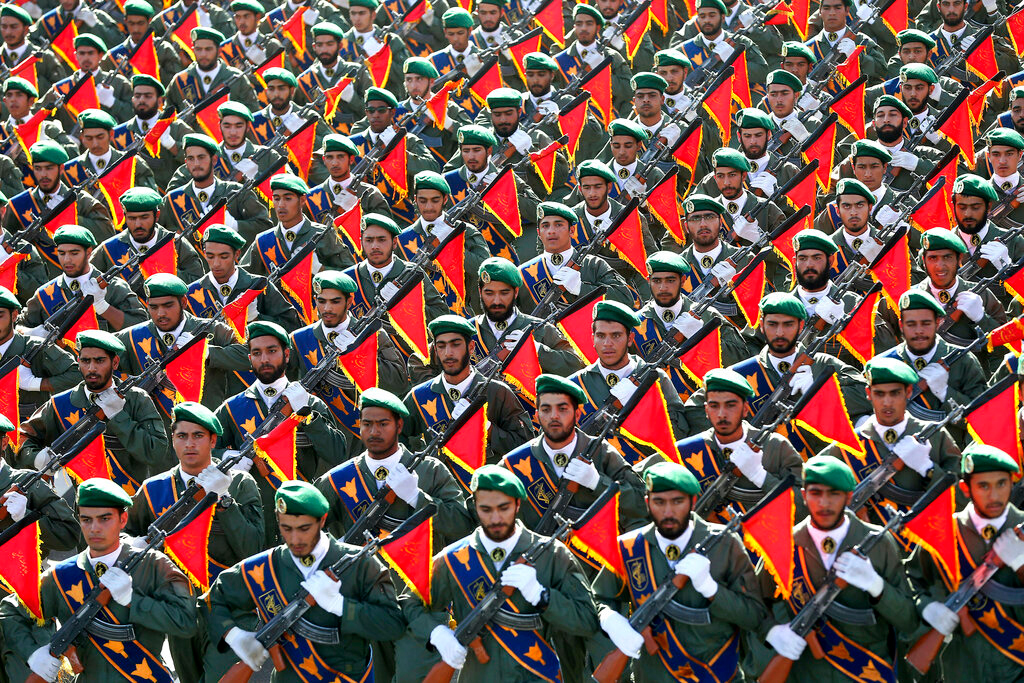 The Trump administration is preparing to designate Iran's Revolutionary Guard a 'foreign terrorist organisation,' an unprecedented move against a national armed force that could have widespread implications for US personnel and policy in the Middle East and elsewhere.

Officials informed of the step said an announcement could come as early as Monday, after a month-long escalation in the administration's rhetoric against Iran, its support for militia groups in Syria, Lebanon, Iraq and Yemen, as well as anti-Israel groups in the region and beyond.

It would be the first such designation by any American administration of an entire foreign government entity, although portions of the Guard, notably its elite Quds Force, have been targeted previously by the United States.

Two US officials and a congressional aide confirmed the planned move. They were not authorised to discuss the matter publicly and spoke on condition of anonymity.

The designation, planning for which was first reported by the Wall Street Journal, comes with sanctions, including freezes on assets the Guard may have in US jurisdictions and a ban on Americans doing business with it or providing material support for its activities.

Although the Guard has broad control and influence over the Iranian economy, such penalties from the US may have limited impact. The designation, however, could significantly complicate US military and diplomatic work, notably in Iraq, where many Shiite militias and Iraqi political parties have close ties to the Guard.

In Lebanon, the designation could further restrict with whom US officials can interact. The Guard has close ties to Hezbollah, which is part of the Lebanese government. Hezbollah is already designated a foreign terrorist organisation by the US Its presence in Lebanon's parliament and executive branch have forced the US to avoid any contact with Hezbollah members even as the US continues to provide assistance to and works with the Lebanese army.

Without exclusions or waivers to the designation, US troops and diplomats could be barred from contact with Iraqi or Lebanese authorities who interact with Guard officials or surrogates.

The Pentagon and US intelligence agencies have raised concerns about the impact of the designation if the move does not allow contact with foreign officials who may have met with or communicated with Guard personnel. Those concerns have in part dissuaded previous administrations from taking the step, which has been considered for more than a decade.

It was not immediately clear whether the designation would include such carve-outs.

In addition to those complications, American commanders are concerned that the designation may prompt Iran to retaliate against US forces in the region, and those commanders plan to warn US troops remaining in Iraq, Syria and elsewhere of that possibility, according to a third US official. This official was not authorised to discuss the matter publicly and spoke on condition of anonymity.

Aside from Iraq, where some 5,200 American troops are stationed, and Syria, where some US 2,000 troops remain, the US 5th Fleet, which operates in the Persian Gulf from its base in Bahrain, and the Al Udeid Air Base in Qatar, are potentially at risk.

A similar warning is also expected from the State Department of possible Iranian retaliation against American interests, including embassies and consulates, and anti-American protests, the first two US officials said. Similar alerts were issued at the start of the Iraq War in 2003 and more recently when the Trump administration announced it would recognise Jerusalem as Israel's capital.

Despite the risks, Iran hard-liners on Capitol Hill, such as Sens. Tom Cotton, R-Ark., and Ted Cruz, R-Texas, and elsewhere have long advocated for the designation. They say it will send an important message to Iran as well as deal it a further blow after the Trump pulled out of the 2015 nuclear deal and reimposed economic sanctions.

Secretary of State Mike Pompeo and national security adviser John Bolton have taken up the call and have in recent months spoken stridently about Iran and its 'malign activities' in the region.

Pompeo has made clear in public comments that pressure on Tehran will only increase until it changes its behavior. Just last week, Pompeo's special representative for Iran, Brian Hook, accused Iran and its proxies of being responsible for the death of 608 US troops in Iraq between 2003 and 2011. He cited newly declassified Defense Department information for the claim, which is expected to be used in the justification for the Guard designation.

'Secretary Pompeo will continue to use all the tools at our disposal to press the regime to change its destructive policies for the benefit of peace in the region and for the sake of its own people, who are the longest-suffering victims of this regime,' Hook said, in an indication that new action is coming.

The department currently designates 60 groups, such as al-Qaida and the Islamic State and their various affiliates, Hezbollah and numerous militant Palestinian factions, as 'foreign terrorist organisations.' But none of them is a state-run military.

Once a designation is announced by the secretary of state in coordination with the Treasury secretary, Congress has seven days to review it. If there are no objections, it then will take effect.