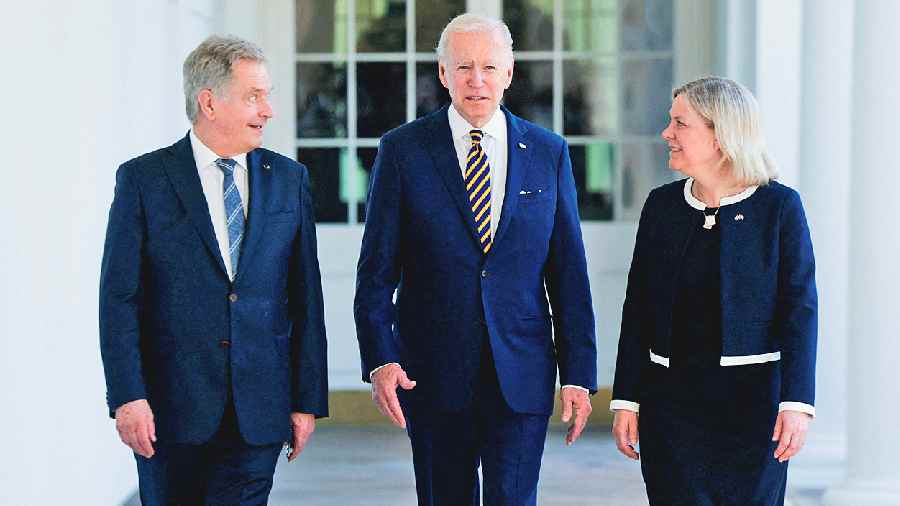 President Joe Biden met the leaders of Finland and Sweden at the White House on Thursday to offer robust US support for their applications to join Nato, while Turkey threatened to block the Nordic nations from becoming members of the alliance.

Biden, who has rallied the West to stand up to Russia after its invasion of Ukraine, joined Swedish Prime Minister Magdalena Andersson and Finnish President Sauli Niinisto in a sunny White House Rose Garden bedecked with their countries’ flags in a show of unity and support.

Biden said his administration was submitting paperwork to the US Congress for speedy approval once Nato members gave the two countries a green light.

“They meet every Nato requirement and then some,” the president said.

“Having two new Nato members in the high north will enhance the security of our alliance and deepen our security cooperation across the board.”

Turkey has expressed strong opposition to the Nordic countries’ ascension, pressing Sweden to halt support for Kurdish militants it considers part of a terrorist group and both to lift their bans on some arms sales to Turkey.

All 30 Nato members need to approve any new entrant. Turkish President Tayyip Erdogan said in a video posted on Twitter on Thursday that Turkey had told allies it will reject Sweden and Finland’s membership.

The Finnish President said at the White House that his country was open to discussing all Turkey’s concerns, and pledged to “commit to Turkey’s security just as Turkey will commit to our security” as a Nato ally.