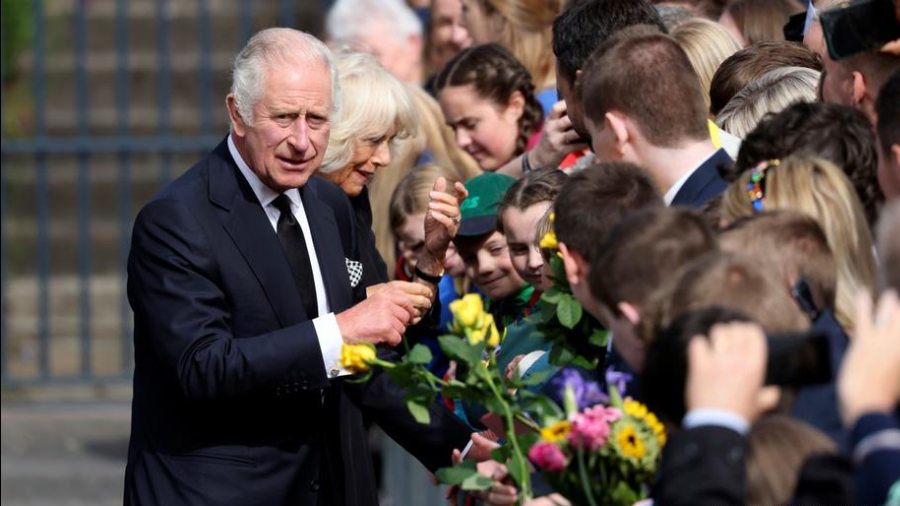 The new British monarch on Tuesday promised that he would follow in the footsteps of his late mother, Queen Elizabeth II, and strive for peace in Northern Ireland.

King Charles III was visiting the province as part of his tour taking in the four constituent nations of the United Kingdom.

What did King Charles do in Northern Ireland?

While in Northern Ireland, the king met the country's political leaders, including those from nationalist parties who want Northern Ireland to leave the United Kingdom and join the Republic of Ireland.

King Charles told politicians he would draw on his mother's "shining example" when it came to promoting the welfare of all of Northern Ireland's residents.

"My mother felt deeply, I know, the significance of the role she herself played in bringing together those whom history had separated, and in extending a hand to make possible the healing of long-held hurts," the king said.

Hundreds of people gathered along the roadside leading to Hillsborough Castle near Belfast, the official residence of the royal family in Northern Ireland. Floral tributes carpeted the area in front of the gates to the castle.

While crowds of well-wishers gathered to greet the new king, Northern Ireland is deeply divided over the British monarchy. The institution draws mixed emotions in the province, where there are two main communities: largely Protestant unionists who view themselves as British and mainly Roman Catholic nationalists who consider themselves to be Irish.

While he was heir to the throne, Charles visited Northern Ireland 39 times. His 40th visit comes as unionists feel their place in the wider UK is under greater threat than ever before, with nationalists set to lead the province's devolved government for the first time.

After returning to Scotland from England on Monday, Charles's trip to Northern Ireland comes ahead of his visit on Friday to Wales.

Charles and his siblings, Anne, Andrew, and Edward, on Monday night stood vigil around their mother's flag-draped coffin in Edinburgh's St. Giles' Cathedral. Members of the public filed past the casket, which was draped in the Royal Standard of Scotland and topped with the ancient crown of Scotland.

Queen Elizabeth died on Thursday in her holiday home at Balmoral in the Scottish Highlands. Her coffin was being flown to London on Tuesday ahead of a state funeral next Monday.

Concerns over policing and free speech

The queen's death and the ascent of King Charles to the throne have raised questions about the public space for dissent.

British police faced criticism from civil liberties groups on Tuesday over their treatment of anti-monarchy protesters and the right to exercise free speech.

A female protester holding a protest placard reading "Not My King" was confronted by at least four officers outside the UK parliament in London, with footage going viral on social media on Monday. The woman was escorted away and reportedly made to stand at another location, but police did not arrest her.

Meanwhile, lawyer and climate activist Paul Powlesland tweeted that a police officer had warned him that he risked arrest by holding up a blank piece of paper opposite parliament.

"He confirmed that if I wrote, 'Not My King' on it, he would arrest me under the Public Order Act because someone might be offended," Powlesland wrote.

However, in some cases people did actually face prosecution. Police charged a woman in Edinburgh with a breach of the peace after holding aloft a sign reading "F*** imperialism, abolish the monarchy."

A man who heckled Prince Andrew as the former monarch's hearse passed through Edinburgh on Monday faced the same charge.