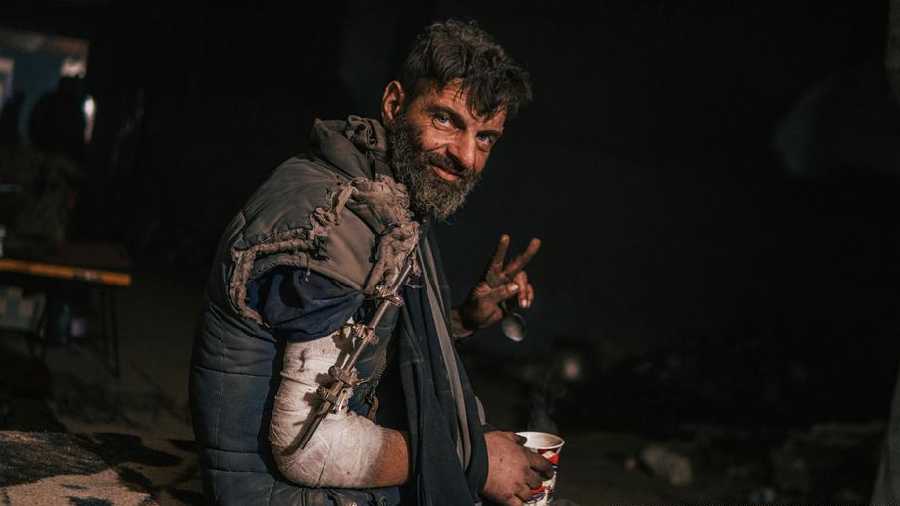 Ukrainian officials have said a new effort is underway to try and secure the evacuation of soldiers remaining in the Azovstal steelworks complex in Mariupol.

"It is very important at this time that we keep up the pressure on [Russian President] Vladimir Putin by supplying more weapons to Ukraine, by increasing the sanctions," Truss said as she arrived for a second day of talks with her G7 counterparts in Germany.

"G7 unity has been vital during this crisis," she added.

DW correspondent in Kyiv Fanny Facsar said Ukraine's counteroffensive in the east of the country "seems to be working."

Facsar said there has been "fierce" fighting between Ukrainian and Russian forces trying to maintain control of villages in the eastern Ukrainian region of Donbas.

"[From] what we're hearing that at this point... the Russian forces seem to have a headway there, while, at same the time, Ukrainian forces seem to advance as well because the weapons, actually from the West, do arrive," Facsar said.

The British Defense Ministry said Russia was "investing significant effort" near the eastern Ukrainian cities of Izium and Severodonetsk to isolate Ukraine's forces.

According to a UK defense intelligence report, Russia's main goal is to "envelop" Ukrainian troops to isolate them from support from the west of the country.

Meanwhile, Ukraine foiled an attempt by Russian forces to cross a river in Donbas, the report said.

"Conducting river crossings in a contested environment is a highly risky manoeuvre and speaks to the pressure the Russian commanders are under to make progress in their operations in eastern Ukraine," it added.

"Russian forces have failed to make any significant advances despite concentrating forces in this area after withdrawing and redeploying units from the Kyiv and Chernihiv Oblasts."

First war crime trial of Russian soldier due in Ukraine

A Russian soldier was scheduled to go on trial in Ukraine over the killing of a 62-year-old unarmed Ukrainian civilian.

Ukrainian prosecutors say the 21-year-old Russian soldier shot the man in the head through an open car window in the northeastern Ukrainian village of Chupakhivka.

The trial will be the first prosecution of a Russian military member for a war crime in Ukraine since the war started on February 24.

On May 4, the Security Service of Ukraine (SBU) posted a short video of the Russian soldier due to go on trial Friday speaking in front of a camera and briefly describing how he shot the man.

The SBU described the video as "one of the first confessions of the enemy invaders."

Ukraine has been criticized by rights groups who say Kyiv is violating the Geneva Conventions by publishing footage and images of prisoners of war.

A coordinator for the Center for Civil Liberties, one of Ukraine's biggest human rights groups, said activists would be monitoring the trial to ensure the suspect's legal rights are protected, noting that it can be different to maintain judicial neutrality during wartime.

The observance of the trial's rules and norms "will determine how similar cases will be handled in the future," said Volodymyr Yavorskyy of the Center for Civil Liberties.

European industrial manufacturing company, Siemens AG, has announced that it will be exiting Russia after nearly 170 years of operating.

"We condemn the war in Ukraine and have decided to carry out an orderly process to wind down our industrial business activities in Russia,'' said CEO Roland Busch on Thursday.

According to its statement, Siemens was one of the first companies to put all new business in and international deliveries to Russia on hold while it evaluated the situation to ensure the safety of its 3,000 employees in the country.

The United Nations along with several aid organizations say that women are bearing the brunt of Russia's invasion of Ukraine. There have been an increasing number of reports from civilians of sexual violence in areas that had been under Russian control.

Human rights lawyer Oleksandra Matviichuk heads up the Center for Civil Liberties in Kyiv and told DW that sexual violence is what she called "the most hidden crime."

"It's very difficult to speak. And that's why sexual violence is the most hidden crime. And survivors of sexual violence very often not apply to police nor to human rights defenders, because they consider this crime as a shame."

Matviichuk said that rape was a way of targeting Ukrainian society and that one of the consequences has been fear, which has allowed Russian forces to gain a level of control.

"Through the concrete victims of rapes, Russian soldiers targeted Ukrainian society... Some people feel guilty because they couldn't protect and stop it and other people feel fear to be treated in the same way. So in some in result, it's provide a frozen effect to resistance. And that's why we consider that Russians use rapes as a part of terror against civilians in order to quickly obtain control over the region.

Ukraine's ambassador to Germany, Andrij Melnyk, said he expects Germany to do more to help Ukraine's accession to the EU.

"Besides arms deliveries and the tightening sanctions, our main goal is to get support for accession to the EU," Melbyk said in a preprinted report by German newspaper network Redaktionsnetzwerk Deutschland (RND).

A decision on Ukraine's candidate status is expected by the end of June.

Ukraine's Deputy Prime Minister Iryna Vereshchuck has said that efforts were underway to try and rescue besieged troops still holed up in the Azovstal steelworks complex in Mariupol.

"We have started a new round of negotiations," Vereshchuck said, according to local publication, Ukrayinska Pravda.

"We would like to have a deal signed on how the evacuation from Azovstal will proceed — we are ready to sign," Vereshchuk said.

The deputy prime minister said the priority would be to evacuate 38 seriously injured soldiers. Ukraine is also willing to exchange Russian prisoners of war in return for the injured Azovstal fighters.

Russia has demanded the surrender of the Ukrainian soldiers in the complex and has thus far refused an evacuation of the remaining forces.

Last week, Ukraine said the remaining women, children and elderly had been evacuated from the steel plant after having spent weeks under siege.

In his nightly video address, Ukrainian President Volodymyr Zelensky said that Moscow's defeat is "obvious to everyone in the world, and also to those who still communicate with them [the Russians]."

Zelensky said that rather than admit defeat, Russia has hid behind artillery bombardments.

"They are cowards and try to hide this behind new missile, air and artillery attacks," Zelensky said.

The Ukrainian president's remarks come as Russia continues its offensive in the eastern Donbas region of Ukraine.

Ukraine's military said it had recapturing some towns and villages in the country's northeast outside of Kharkiv, but acknowledged that Russian forces have seen "partial success'' farther south.

"In the area around Sievierodonetsk, the enemy is conducting attacks on Kudryashivka and Sievierodonetsk and is meeting partial success," the Ukrainian General Staff said in its daily briefing late Thursday.

Summary of Thursday's events in Russia's war on Ukraine

A thousand bodies have been recovered near the Ukrainian capital, Kyiv, in recent days, with many of the killings possibly amounting to war crimes amid the Russian invasion, according to United Nations High Commissioner for Human Rights, Michelle Bachelet.

The EU has called on member states to urgently find ways to transport essential agricultural goods from Ukraine via land routes to stabilize global food supplies. Russia's blockade of key ports in the Black Sea has caused global food prices and shortages to hit record levels

Ukraine's prosecutor general, Iryna Venediktova, said that her office has charged a 21-year-old Russian sergeant in connection with the killing of an elderly civilian who was gunned down while riding a bicycle.

Finnish President Sauli Niinisto and Prime Minister Sanna Marin have said their country must apply to join the NATO military alliance as quickly as possible, a policy turnaround that has been prompted by Russia's invasion of Ukraine.