During World War II, the Nazis executed about 20,000 people there: Volodymyr Zelensky 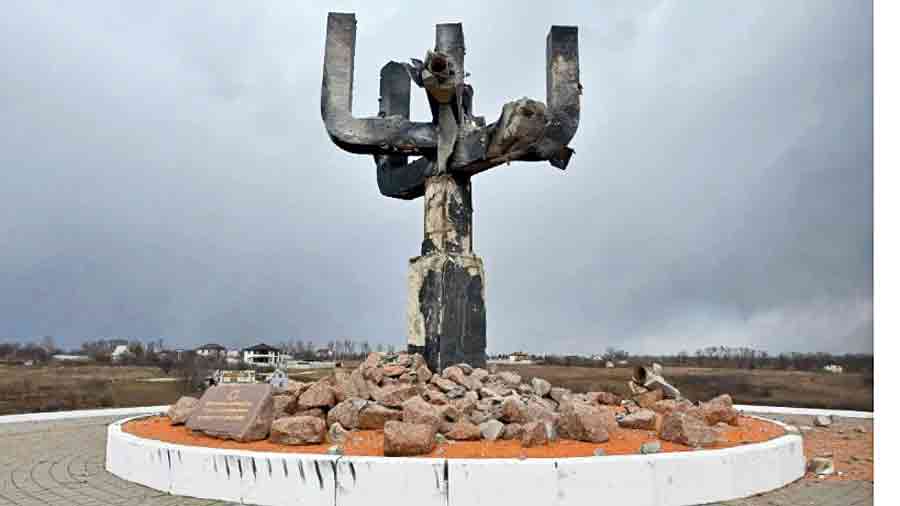 The menorah that was damaged at the Drobytskyi Yar Holocaust memorial complex in eastern Ukraine.
Getty Images
Emma Bubola   |   Published 28.03.22, 03:33 AM

Russian shelling damaged a Holocaust memorial at Drobytskyi Yar, near Kharkiv, commemorating thousands of Jews who were killed by the Nazis there, the Ukrainian government said on Saturday.

“During World War II, the Nazis executed about 20,000 people there,” President Volodymyr Zelensky of Ukraine said in an address on Facebook on Saturday night. “Eighty years later, they are killed a second time. And Russia is doing it.”

Ukraine’s foreign minister, Dmytro Kuleba, posted a picture on Twitter of a giant menorah, one of the monuments at the site, visibly damaged.

“Why Russia keeps attacking Holocaust Memorials in Ukraine?” he wrote.

It was the second time since the Russian invasion began last month that Ukrainian officials had accused Russian forces of attacking sites where Jews were massacred during the Nazi invasion of the Soviet Union, which started in 1941.

On March 1, Kuleba said, a Russian missile had hit the territory of Babyn Yar, where nearly 34,000 people were killed in just two days in September 1941, in one of the worst mass murders of Jews during the Holocaust.

“Russia continues to attack not only the civilian population of #Ukraine but also the places of remembrance,” the Babyn Yar Holocaust Memorial Center wrote on Twitter on Saturday.

After the attack, the Ukrainian authorities evoked a similarity between the Russian and Nazi invasions, an association they have made several times during the war. Zelensky said the Russian troops had been ordered to operate in the same way the Nazis did, by destroying everything that makes Ukraine a nation.

The Ukrainian government also called on the Israeli authorities to react.

“I expect Israel to strongly condemn this barbarism,” Kuleba wrote on Twitter.

Michael Brodsky, Israel’s ambassador to Ukraine, acknowledged the reports in a statement posted on Twitter, noting that he had visited the site only “a couple of months ago”.

Israel’s foreign minister, Yair Lapid, condemned the attack on Babyn Yar, but did not accuse Russia. And after Zelensky’s address to the Knesset, some Israeli lawmakers criticised his comparison of the war in Ukraine to the Holocaust.