UK lawmakers prepare to vote on alternatives to Brexit deal 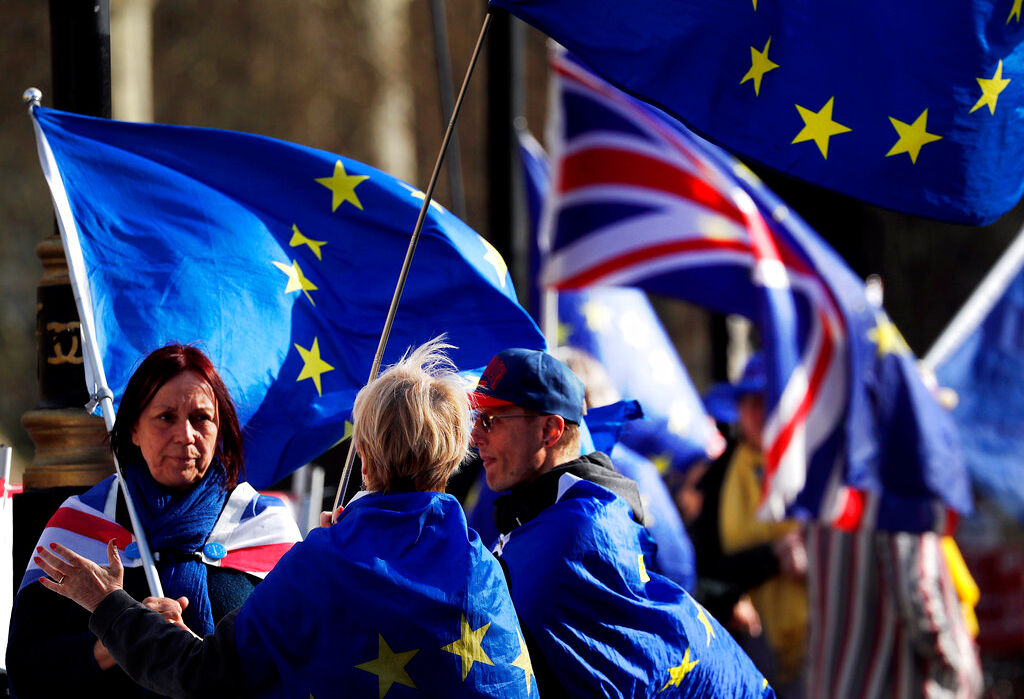 British lawmakers were preparing to vote Wednesday on multiple options for leaving the European Union as they sought to bring some clarity to the country's tortured Brexit process.

In the wake of two overwhelming defeats for Prime Minister Theresa May's withdrawal agreement with the EU, the House of Commons has taken control of the parliamentary timetable on Wednesday in the hope of finding a way through the impasse.

Lawmakers are holding a five-hour debate on a wide range of Brexit alternatives, after which they will be asked to vote for all of the options they could accept. The plan is for the most popular ideas to move to a second vote on Monday to find one option that can command a majority.

The debate comes two days after lawmakers took control of the parliamentary agenda away from the government amid alarm that Britain was heading toward a chaotic Brexit within weeks with no exit plan in place.

May has said she will consider the outcome of the 'indicative votes,' though she has refused to be bound by the result.

Lawmakers have submitted 16 different options for consideration, though House of Commons Speaker John Bercow is expected to whittle the number down to about half a dozen before debate begins. The proposals include leaving the EU without a deal, remaining in the bloc's single market and customs union, and holding a new referendum on Britain's membership in the bloc.

Almost three years after Britons voted to leave the EU, the date and terms of its departure are up in the air. Last week, the EU granted Britain a delay to the scheduled March 29 exit date, saying that if Parliament approved the proposed divorce deal, the U.K. would leave the EU on May 22. If not, the government has until April 12 to tell the 27 remaining EU countries what it plans to do — leave without a deal, cancel Brexit or propose a radically new path.

May, meanwhile, still hopes to bring the divorce deal that the government struck with the EU back for another vote in the House of Commons — if she can win over enough opponents to ensure passage. Lawmakers rejected the deal by 230 votes in January and by 149 votes earlier this month, primarily because of concerns about the Northern Ireland border.

The prime minister is under mounting pressure from pro-Brexit members of her Conservative Party to quit. Several have said they would support the Brexit deal if another leader was chosen to lead the next stage of talks with the EU.

May, who is due to address Conservative lawmakers later Wednesday, did not reply directly when asked in the House of Commons whether she would be resigning in order to get her Brexit deal approved.

'It is my sense of responsibility and duty that has meant I have kept working to ensure Brexit is delivered,' she said.

House of Commons leader Andrea Leadsom told the BBC there was a 'real possibility' the unpopular agreement would be brought back for a vote on Thursday or Friday.

Tony Travers, a professor of government at the London School of Economics, said the parliamentary votes could boost support for May's deal by raising the prospect that Brexit might be delayed or abandoned.

'The very fact that parliament is voting in this indicative way, which could lead via various difficult hurdles to a softer Brexit is convincing a number of hard-line pro-Brexiteers that after all Theresa May's deal is better than no deal because at least it gets them out of the EU,' Travers said.

Conservative lawmaker Jacob Rees-Mogg, who has sought a complete break from the European Union, said May's deal is still a bad one, but 'the risk is, if I don't back it, we don't leave the EU at all.'

But Rees-Mogg said he would not back the deal unless Northern Ireland's Democratic Unionist Party decided to vote for it. The DUP, which has 10 seats in the House of Commons, said Tuesday that it still wasn't prepared to support the 'toxic' deal.

Wednesday's votes in Parliament could potentially produce conflicting and inconclusive results. But they could push Britain in the direction of a softer Brexit that keeps Britain closely tied economically to the EU.

That would probably require the U.K. to seek a longer delay, although that would mean that the country would have to take part in May 23-26 European Parliament elections.

Many EU officials are keen to avoid the messy participation of a departing member state.

But the chief of the European Council told European lawmakers that the EU should let Britain take part. Donald Tusk said the bloc could not 'betray' the millions of Britons who want to stay in the EU.

'They may feel they are not sufficiently represented by the U.K. Parliament but they must feel that are represented by you in this chamber. Because they are Europeans,' Tusk said.

Many Britons — whether they are for Brexit or against it — are simply fed up with the unending political gridlock.

'I think it's just chaos and I know that they're just not really handling it well and Theresa May, she's got her hands full, and she's trying her best,' said Anna Lopez-Fujimakia a sustainability worker from London.

'I feel bad for her because I can't think of anybody who would do a better job because there's not really a good job to be done in this situation.'