Starting Monday, people from outside the country need to show Covid-19 negative report 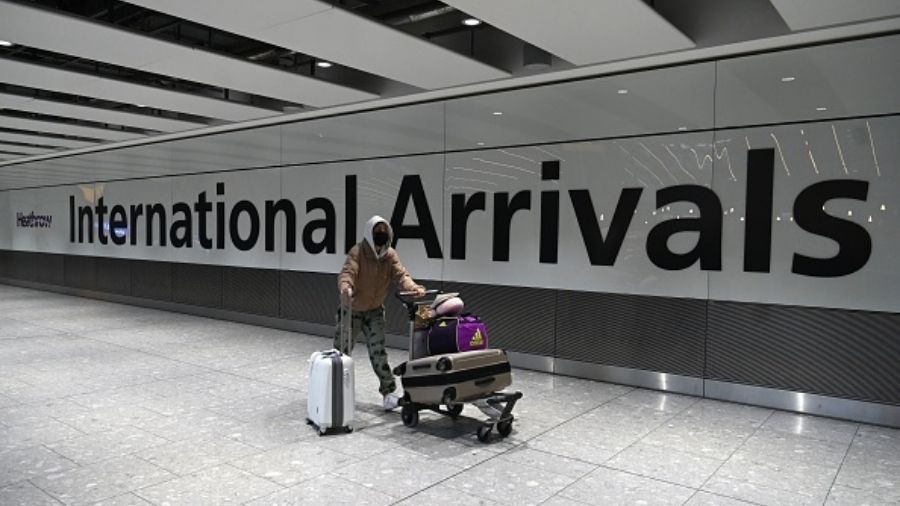 On arrival, passengers will have to furnish the address where they will be required to quarantine themselves for 10 days, UK authorities said.
Getty Images
Amit Roy   |   London   |   Published 17.01.21, 01:44 AM

International passengers arriving in the UK from 4am (9.30am IST) on Monday from anywhere in the world will have to show they have had a negative test for Covid-19 taken within the previous 72 hours.

On arrival, they will have to furnish the address where they will be required to quarantine themselves for 10 days — though this can be reduced to five days if they take a new test which also proves negative. The latter from approved clinics will cost between £65 and £120.

The new restrictions — to stay in place until, at least,  February 15 — have been introduced by the Prime Minister Boris Johnson to guard against a new Brazilian strain of the virus, which has come in the wake of the UK and South African variants.

Boris said it was “vital” to take extra measures now: “It’s precisely because we have the hope of that vaccine and the risk of new strains coming from overseas that we must take additional steps now to stop those strains from entering the country.”

Failure to self-isolate can mean a £1,000 fine in England, Wales and Northern Ireland. Fines in England for persistent offenders have doubled to £10,000. People can be fined up to £3,200 in England for providing inaccurate contact details.

As to what kind of test taken abroad would be acceptable, the government said it would look for something “with at least 97 per cent specificity and 80 per cent sensitivity”.

NHS hospitals are finding it difficult to cope with the surge in new cases caused by the UK variant. The latest government figures on Friday showed another 55,761 new cases had been reported — up from 48,682 the previous day.

According to government figures, the death toll from the virus now stands at 87,291. Proportionate to the population, that is equivalent to 1.7 million deaths in India. “Excess deaths” in the UK — the difference from what is normally expected in an average year — is reckoned to have already crossed the 100,000 mark.

As the roll out of vaccines gathers momentum in the UK, there is one point that might be especially relevant to India where the Oxford vaccine is being made by the Serum Institute of India.

The original idea was to give two doses of the vaccine three weeks apart.

Now it has been decided that it is better to give as many people as possible the first dose as this alone would confer significant immunity.

It is also being stated that delaying the second dose to 12 weeks might actually give people even stronger immunity.

Regulatory documents on the Oxford/AstraZeneca Covid-19 vaccine published this week by the Medicines and Healthcare products Regulatory Agency said: “Exploratory analyses showed that increased immunogenicity was associated with a longer dose interval. Efficacy is currently demonstrated with more certainty for dose intervals from 8 to 12 weeks. Data for intervals longer than 12 weeks are limited.”

Meanwhile, a report from the Joint Committee on Vaccination and Immunisation on the new dose regimen added: “With most vaccines an extended interval between the prime and booster doses leads to a better immune response to the booster dose. There is evidence that a longer interval between the first and second doses promotes a stronger immune response with the AstraZeneca vaccine.

“There is currently no strong evidence to expect that the immune response from the Pfizer-BioNTech and AstraZeneca vaccines differ substantially from each other.”