The nation deported a US and a Denmark citizen, who it says fought for IS 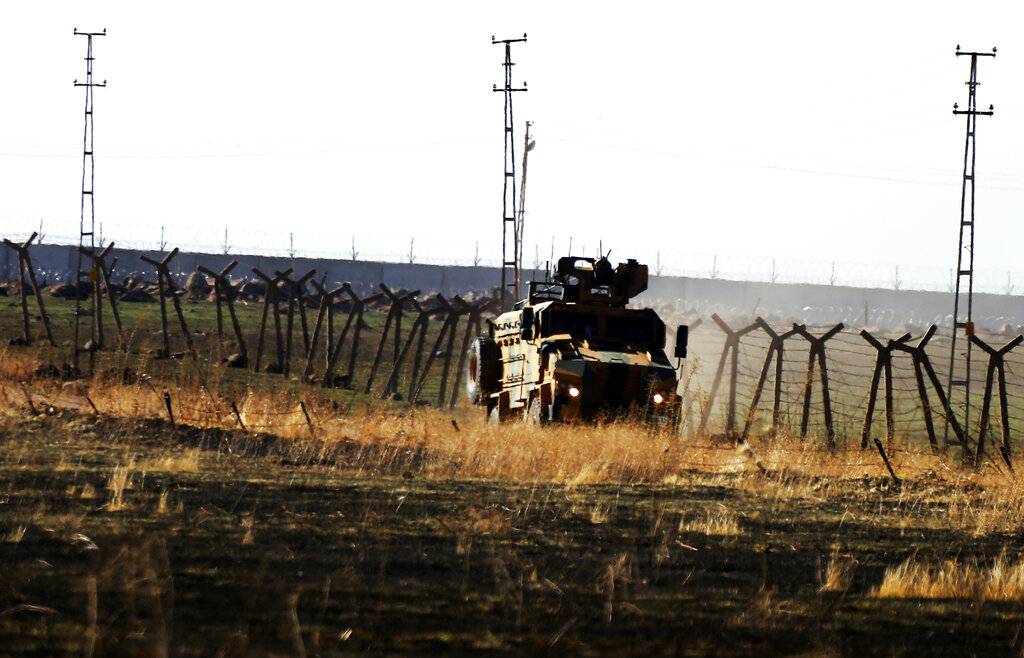 In this photo taken from the outskirts of the village of Alakamis, in Idil province, southeastern Turkey, a Turkish Army vehicles is driven in Turkey after conducting a joint patrol with Russian forces in Syria, Friday, November 8, 2019.
AP
AP   |   Ankara   |   Published 12.11.19, 08:59 AM

Turkey on Monday deported citizens of the United States and Denmark who fought for the Islamic State and made plans to expel other foreign nationals as the government began a new push to send back captured foreign fighters to their home countries, a Turkish official said.

The move comes just over a week after the Turkish interior minister said the nation was not a 'hotel' for IS fighters and criticised Western nations for their reluctance to take back citizens who had joined the ranks of the extremist militant group as it sought to establish a 'caliphate' in Iraq and Syria.

Turkish interior minister Suleyman Soylu said last week that about 1,200 foreign IS fighters were in prisons and 287 members, including women and children, were recaptured during Turkey's offensive in Syria.

Several European countries, including Britain, have stripped IS fighters of their nationalities to prevent their return.

Two Irish nationals, two German nationals and 11 French nationals who were captured in Syria were also to be transferred to their home countries soon, Catakli said.

The US did not immediately comment on Ankara's announcement.

Turkey's Sabah newspaper, which is close to President Recep Tayyip Erdogan's government, reported that the US citizen who had been deported was stuck in a heavily militarised no man's land between the Greece and Turkey borders.

Greek police said in a statement that Turkish authorities had first tried to deport a United States citizen of Arab origin on October 11 on grounds that he had exceeded his legal stay in Turkey. The man, however, stated that he did not wish to enter Greece and returned to Turkey, accompanied by Turkish police.

On Monday, he returned to the same border station on his own and asked to enter Greece, police said. Greek authorities refused him entry, sending him back to Turkey.

Stavros Tziamalides, an official from the border village of Kastanies, said the border gate was shut on the Greek side and there was a greater presence of Greek police and border guards from the Frontex European border agency.

In Denmark, justice minister Nick Hakkerup told Danish broadcaster TV2 that any Danish citizens who fought for IS and are repatriated to the country 'must be punished as severely as possible.'

Germany said it will not refuse entry to its own citizens, but added that as far as German officials know, the citizen being deported Monday was not involved with IS.

In Bosnia, government officials announced on Monday that citizens who had fought with IS could return to the country, while a Dutch court ruled on the same day that the country must attempt to bring home children whose mothers traveled to Syria to join Islamic extremist groups. The decision came in response to a case filed by lawyers on behalf of 23 women and their 56 children who are housed in camps in northern Syria.

In Denmark, weekly newspaper Weekendavisen said the name of the Danish citizen being deported was Ahmad Salem el-Haj, who faces terror charges in Denmark.

While Turkey has quietly deported IS sympathisers for years, it raised the issue more forcefully after Western nations refused to back its invasion of northeastern Syria and its offensive against Syrian Kurdish fighters, whom Ankara considers terrorists linked to Kurdish insurgents fighting inside Turkey. Many countries have voiced concerns that the Turkish incursion would lead to a resurgence of IS.

Turkey has been accused of enabling the influx of thousands of foreign IS sympathisers into Syria over the years. At the height of the extremist group's power, the Turkish border crossings were the main route for those hoping to join IS in Syria. Turkey has denied the accusations and later stepped up security at its borders, including by profiling possible IS fighters at airports and building a wall along parts of its porous border.

Turkey was hit by a wave of IS attacks in 2015 and 2016, including one by a gunman who opened fire at an Istanbul nightclub during New Year's celebrations in the early hours of 2017 and killed 39 people.

In Bosnia, security minister Dragan Mektic said Monday that about 260 Bosnian citizens remained in the camps in Syria, including approximately 100 men and 160 women and children. He says only confirmed Bosnian citizens would be taken in. Bosnia has introduced prison terms of up to 10 years for its citizens who fight in conflicts abroad or recruit others.

A court in The Hague, Netherlands, on Monday ordered the government to make attempts to repatriate women and children whose mothers traveled to Syria to join Islamic extremist groups.

'The children are not responsible for the actions of their parents, however serious they are,' the court said, adding that while Dutch officials must use 'all possible means' to repatriate them, the state also 'cannot be ordered to take serious security risks.'

So far, Burger said, German authorities cannot confirm that the 10 were involved with IS and, in the case of the person being deported on Monday, they know of no link to IS. There are indications that two of the women were in Syria, but neither of the children is believed to have been in Syria.