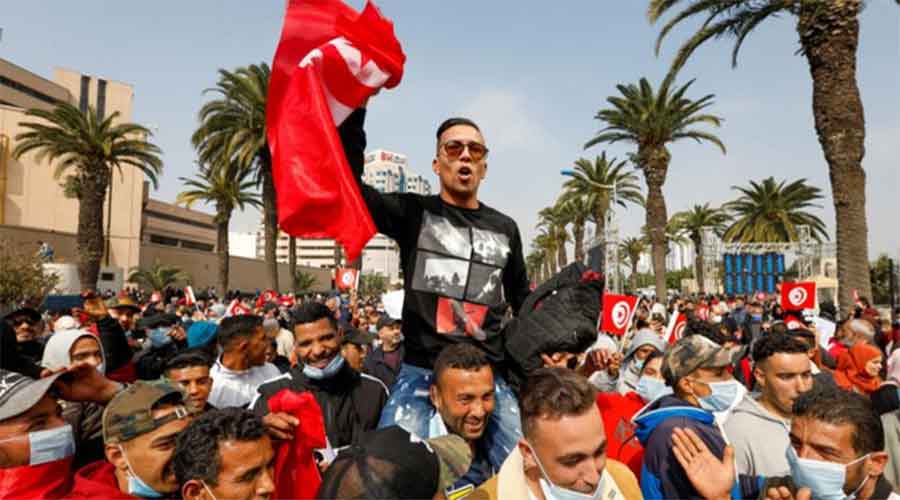 Tunisia faced its worst crisis in a decade of democracy on Monday after President Kais Saied ousted the government and froze parliament with help from the army in a move denounced as a coup by the main parties including Islamists.

It follows months of deadlock and disputes pitting Saied, a political independent, against Prime Minister Hichem Mechichi and a fragmented parliament as Tunisia has descended deeper into an economic crisis exacerbated by the Covid-19 pandemic.

Parliament Speaker Rached Ghannouchi, the head of the moderate Islamist Ennahda party which has played a role in successive coalitions, decried it as an assault on democracy and called on Tunisians to take to the streets in opposition.

Supporters and opponents of the President threw stones at each other outside parliament on Monday morning leading to injuries with one man sitting on the pavement bleeding from the head. Tunisia’s hard-currency bonds tumbled.

The army, which has yet to comment on Saied’s moves, deployed to the government palace in the Kasbah and stopped workers from entering the building on Monday. Troops also surrounded parliament and stopped Ghannouchi from going in.

In a statement late on Sunday, Saied invoked the Constitution to dismiss Mechichi and decree a freeze of parliament for 30 days, saying he would govern alongside a new premier.

Mechichi — also an independent — is at his home and not under arrest, one source close to him and two Tunisian security sources said.

Saied has yet to say when the new Premier will be appointed.

His actions follow a day of protests against the government and Ennahda, the biggest party in parliament, following a spike in Covid-19 cases and growing anger over chronic political dysfunction and economic malaise.

It poses the greatest risk to Tunisia’s stability since the 2011 revolution that triggered the “Arab spring” and ousted an autocracy in favour of democratic rule, but has failed to deliver sound governance or prosperity.

Hours after Saied’s announcement, huge crowds gathered to back him in Tunis and other cities, cheering, dancing and ululating while the military blocked off parliament and state television station.

Supporters of Saied and Ennahda gathered outside parliament early on Monday morning, some of them exchanging insults and throwing bottles.

“We are here to protect Tunisia. We have seen all the tragedies under the rule of the Muslim Brotherhood,” said a young man who gave his name as Ayman.

He was referring to the Islamist movement founded in Egypt in 1928 which has inspired Sunni Islamists across the Arab world, including Ennahda.

In recent years, Ennahda has sought to distance itself from the Brotherhood, saying it has nothing to do with the movement which was driven from power in Egypt in 2013 by the military, encouraged by mass protests against its rule.

“Saied is a new Sisi who wants to collect all authority for himself ...We will stand up to the coup against the revolution”, he said.

Ghannouchi arrived at the parliament building early on Monday morning and said he would call a session in defiance of Saied, but the army stationed outside stopped the 80-year-old former political exile from entering.

”I am against gathering all powers in the hands of one person,” he said, standing in front of the locked gates.

Saied, who swept to office in 2019 after campaigning as the scourge of a corrupt, incompetent elite, rejected accusations that he had conducted a coup.

He said his actions were based on Article 80 of the constitution and framed them as a popular response to the economic and political paralysis that have mired Tunisia for years. The parties with the most seats in parliament said Article 80 did not support Saied's move.

Two of the other main parties in parliament, Heart of Tunisia and Karama, joined Ennahda in accusing Saied of a coup.

Saied also said in his statement that he had suspended the legal immunity of parliament members and that he was taking control of the general prosecutor's office.

He warned against any armed response to his actions. ”Whoever shoots a bullet, the armed forces will respond with bullets,” said Saied, who has support from a wide array of Tunisians including both Islamists and leftists.

Crowds numbering in the tens of thousands backing the president stayed on the streets of Tunis and other cities, with some people setting off fireworks, for hours after his announcement as helicopters circled overhead.

Under the constitution, the president has direct responsibility only for foreign affairs and the military, but after a government debacle with walk-in vaccination centres last week, he told the army to take charge of the pandemic response.