Advertisement
Home / World / How MBS found a Kushy place in US

How MBS found a Kushy place in US 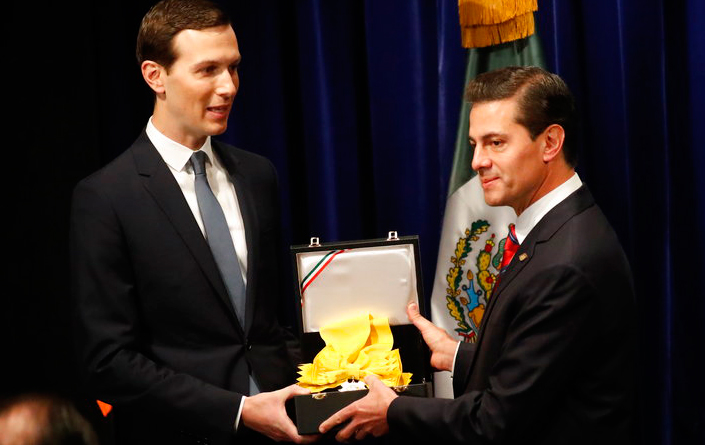 Senior American officials were worried. Since the early months of the Donald Trump administration, Jared Kushner, the President’s son-in-law and West Asia adviser, had been having private, informal conversations with Prince Mohammed bin Salman, the favourite son of Saudi Arabia’s king.

In an effort to tighten practices at the White House, a new chief of staff tried to reimpose longstanding procedures stipulating that National Security Council staff members should participate in all calls with foreign leaders.

But even with the restrictions in place, Kushner, 37, and Crown Prince Salman, 33, kept chatting, according to three former White House officials and two others briefed by the Saudi royal court. In fact, they said, the two men were on a first-name basis, calling each other Jared and Mohammed in text messages and phone calls.

The exchanges continued even after the October 2 killing of Jamal Khashoggi, the Saudi journalist who was ambushed and dismembered by Saudi agents, according to two former senior American officials and the two people briefed by the Saudis.

As the killing set off a firestorm around the world and American intelligence agencies concluded that it was ordered by MBS (as Crown Prince Salman is popularly known), Kushner became the crown prince’s most important defender inside the White House, people familiar with its internal deliberations say.

Since the uproar over Khashoggi’s killing, the Trump administration has acknowledged only one conversation between Kushner and MBS: an October 10 telephone call joined by John R. Bolton, the national security adviser.

But American officials and a Saudi briefed on their conversations said that Kushner and MBS have continued to chat informally. According to the Saudi, Kushner has offered the crown prince advice about how to weather the storm, urging him to resolve his conflicts around the region and avoid further embarrassments.

Kushner’s support for MBS in the moment of crisis is a striking demonstration of a singular bond that has helped draw Trump into an embrace of Saudi Arabia as one of his most important international allies.

But the ties between Kushner and MBS did not happen on their own. The prince and his advisers, eager to enlist American support for his hawkish policies in the region and for his own consolidation of power, cultivated the relationship with Kushner for more than two years.

A delegation of Saudis close to the prince visited the US as early as the month Trump was elected, documents show, and brought back a report identifying Kushner as a crucial focal point in the courtship of the new administration. He brought to the job scant knowledge about the region, a transactional mind-set and an intense focus on reaching a deal with the Palestinians that met Israel’s demands, the delegation noted.

In addition to offering to help resolve the dispute between Israel and the Palestinians, the Saudis offered hundreds of billions of dollars in deals to buy American weapons and invest in US infrastructure.

Trump later announced versions of some of these items with great fanfare when he made his first foreign trip: to an Arab-Islamic summit in Riyadh, the Saudi capital. The Saudis had extended that invitation during the delegation’s November 2016 visit.

“The inner circle is predominantly deal makers who lack familiarity with political customs and deep institutions, and they support Jared Kushner,” the Saudi delegation wrote of the incoming administration in a slide presentation obtained by the Lebanese newspaper Al Akhbar, which provided it to The Times. Several Americans who spoke with the delegation confirmed the slide presentation’s accounts of the discussions.

The courtship of Kushner appears to have worked.

Only a few months after Trump moved into the White House, Kushner was inquiring about the Saudi royal succession process and whether the US could influence it.

By March, Kushner helped usher MBS into a formal lunch with Trump in a state dining room at the White House, capitalising on a last-minute cancellation by Chancellor Angela Merkel of Germany because of a snowstorm.

Bending protocol, Kushner arranged for MBS to receive the kind of treatment usually reserved for heads of state, with photographs and news media coverage, according to a person involved in the arrangements.

The Arab rulers of the oil-rich Persian Gulf mainly figured in Kushner’s life as investors in American real estate, the Kushner family business.

So Tom Barrack, a Lebanese-American real estate investor with close ties to both Trump and the Gulf rulers, set out during the campaign to introduce Kushner to his associates as a useful ally.

“You will love him and he agrees with our agenda!” Barrack wrote in May 2016 in an email to the Emirati ambassador in Washington, Youssef Otaiba.

Otaiba soon positioned himself as an informal adviser on the region to Kushner.

“MBS is incredibly impressive,” Otaiba wrote Barrack in June 2016, as they tried to arrange meetings between the prince and the Trump campaign.

On the eve of the inauguration of Trump, Rick Gerson, a hedge fund manager who was close to Kushner and to the Emirati crown prince, wrote to MBS. “You have a true friend in the White House,” Gerson wrote.

Kushner to MBS: world is watching