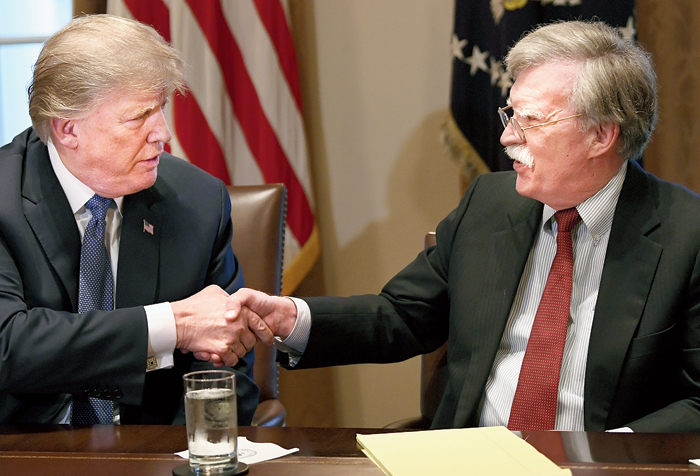 Trump announced the decision on Twitter. “I informed John Bolton last night that his services are no longer needed at the White House. I disagreed strongly with many of his suggestions, as did others in the Administration, and therefore I asked John for his resignation, which was given to me this morning. I thank John very much for his service. I will be naming a new National Security Advisor next week.”

His departure comes as Trump is pursuing diplomatic openings with two of the US’s most intractable enemies, efforts that have troubled hard-liners in the administration, like Bolton, who view North Korea and Iran as profoundly untrustworthy.

The President has continued to court Kim Jong-un, the repressive leader of North Korea, despite Kim’s refusal to surrender his nuclear programme and despite repeated short-range missile tests by the North that have rattled its neighbours.

In recent days, Trump has expressed a willingness to meet President Hassan Rouhani of Iran under the right circumstances, and even to extend short-term financing to Tehran, although the offer has so far been rebuffed.

To his admirers, Bolton was supposed to be a check on what they feared would be naïve diplomacy, a clear-eyed realist who would keep a president without prior experience in foreign affairs from giving away the store to wily adversaries.

But Trump has long complained privately that Bolton was too willing to get the US into another war.

The tension between the men was aggravated in recent months by the President’s decisions to call off a planned airstrike on Iran in retaliation for the downing of an American surveillance drone and to meet Kim at the Demilitarised Zone and cross over into North Korea.

Bolton favoured the strike on Iran and publicly criticised recent North Korean missile tests that Trump brushed off. After the President arranged the DMZ meeting with Kim via a last-minute Twitter message, Bolton opted not to accompany him and instead proceeded on a previously scheduled trip to Mongolia.

The rift between the President and his national security adviser owed as much to personality as to policy. The President never warmed to him, a dynamic that is often fatal in this White House. Bolton also clashed with secretary of state Mike Pompeo.

At its core, the schism reflected a deep-seated philosophical difference that has characterised the Trump presidency. While given to bellicose language, Trump came to office deeply sceptical of overseas military adventures and promising negotiations to resolve volatile conflicts.

Bolton, however, has been one of Washington’s most outspoken hawks.

A former under secretary of state and ambassador to the UN under President George W. Bush, Bolton, 70, never fully subscribed to Trump’s courtship of Kim and privately expressed frustration that the President was unwilling to take more meaningful action to transform West Asia in the service of American interests.

Bolton was hamstrung in his ability to steer Trump in what he saw as the right direction. He also clashed with officials at the defence department. At one point, military officials expressed alarm at Bolton’s requests for contingency war plans.

While in office, Bolton sought to minimise his differences with the President in public. After Trump said he would be open to meeting with Rouhani and even to extending a line of credit to help Tehran get through its financial difficulties while talks proceeded, Bolton insisted that did not reflect a concession by the President.

“He’ll meet with anybody to talk,” Bolton told Radio Free Europe/Radio Liberty. “He is a negotiator. He is a deal maker. But talking with them does not imply — for President Trump, does not imply changing your position.”