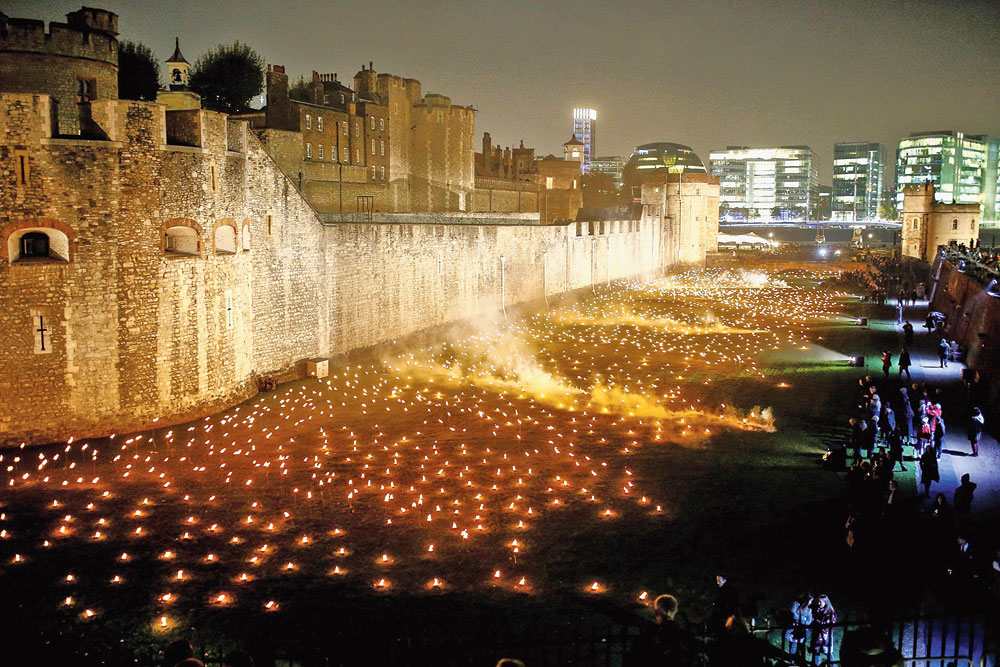 Sarojini Naidu’s moving poem, The Gift of India, which tells of the sacrifices made by 1.5 million Indian soldiers in the First World War, will be read by actress Nina Wadia at this year’s very special Festival of Remembrance at the Royal Albert Hall in London on Saturday.

The poem, written in 1915, encapsulates the grief among Indian mothers at losing their sons in foreign fields but also the pride and patriotism inspired by their bravery and heroism.

Is there aught you need that my hands withhold,

Rich gifts of raiment or grain or gold?

Lo! I have flung to the East and West

Priceless treasures torn from my breast,

And yielded the sons of my stricken womb

To the drum-beats of duty, the sabres of doom.

The Albert Hall ceremony is a sombre annual event organised by the Royal British Legion but this year marks the centenary of the end of what was meant to be “the war to end all wars”. It proved to be otherwise, of course.

The ceremony will be attended by members of the royal family, including the Queen, Prince Charles and Camilla, Prince William and his younger brother, Harry, and their respective wives, Kate and Meghan.

There has long been a feeling that Indian soldiers have not been given due and their contribution in fighting a war not their own has either been ignored or forgotten.

There was the case a few years ago of a group of Sikh veterans in Southall being beaten up by local white thugs who told the elderly men: “What are you doing wearing our medals?”

According to official Indian casualty figures, “74,187 died and another 67,000 were wounded”. Indians fought the Germans in East Africa, in the bitter cold of the Western Front, the Italians in Gallipoli and Egypt, and the Ottomans in Mesopotamia.

The London-based historian Kusoom Vadgama, who has been struggling to win recognition for Indian soldiers both from the British establishment and the Indian High Commission for more than 30 years, expressed her frustration: “The irony of all this is that Indians volunteered to fight and die for Britain — and now we are having to beg for recognition.

“For the last three years I have been pleading with the Royal British Legion to give equal recognition to the Indian and Empire soldiers in the Festival of Remembrance.”

The Royal British Legion appears to have listened not only to her appeals but also others such as Jitesh Gadhia, the Tory peer who came up with the idea of a red khadi poppy. Prime Minister Theresa May has been wearing one in recent days.

Catherine Davies, head of Remembrance at the Royal British Legion, said: “The Festival of Remembrance 2018 will follow the ‘Thank You’ theme of paying tribute to all the men, women, and children of the First World War from Britain and the Commonwealth who served, sacrificed and changed our world.

“As part of the festival, we have included a reading from The Gift of India by Sarojini Naidu, performed by Nina Wadia.

“We will hear the voices of Indian soldiers during another section featuring first hand testimony of the First World War and the flags of 53 Commonwealth nations will be placed on display.

“We feel that this is a poignant and appropriate element which will have a moving effect upon the entire audience at the Royal Albert Hall and at home.”

She added: “The Royal British Legion has been proud to include the British Asian community in the 2018 centenary commemorations.

“We are thanking the British Indian Army for its service and contribution to the First World War and have created the poppy made of khadi. The poppy’s petals are made of the famous spun cotton cloth popularised by Mahatma Gandhi on his spinning wheel. We attended Diwali on Trafalgar Square recently to distribute the poppy. We will not accept donations in return for the poppy but ask that British Asians wear it to say thank you to the First World War generation.”

Gadhia said he hoped Saturday’s ceremony “inspires the next generation of Asians growing up in Britain to understand their own identity. They should know that their parents and grandparents did not just come here as immigrants.

“Our ancestors fought for this country and for freedom and democracy, even though they lived in a colony at the time. We therefore have as great a stake here as anyone else. Indeed, everyone from the Commonwealth should be proud of the role which their forebears played in shaping the destiny of the world a century ago.”

When the terror and the tumult of hate shall cease

And life be refashioned on anvils of peace,

And your love shall offer memorial thanks

To the comrades who fought in your dauntless ranks,

And you honour the deeds of the deathless ones,

Remember the blood of thy martyred sons!