Advertisement
Home / World / There wasn’t even time to aim, so many targets: Christchurch gunman

The gunman, who shot a live video as he killed, went to a vehicle, changed his gun and returned to shoot 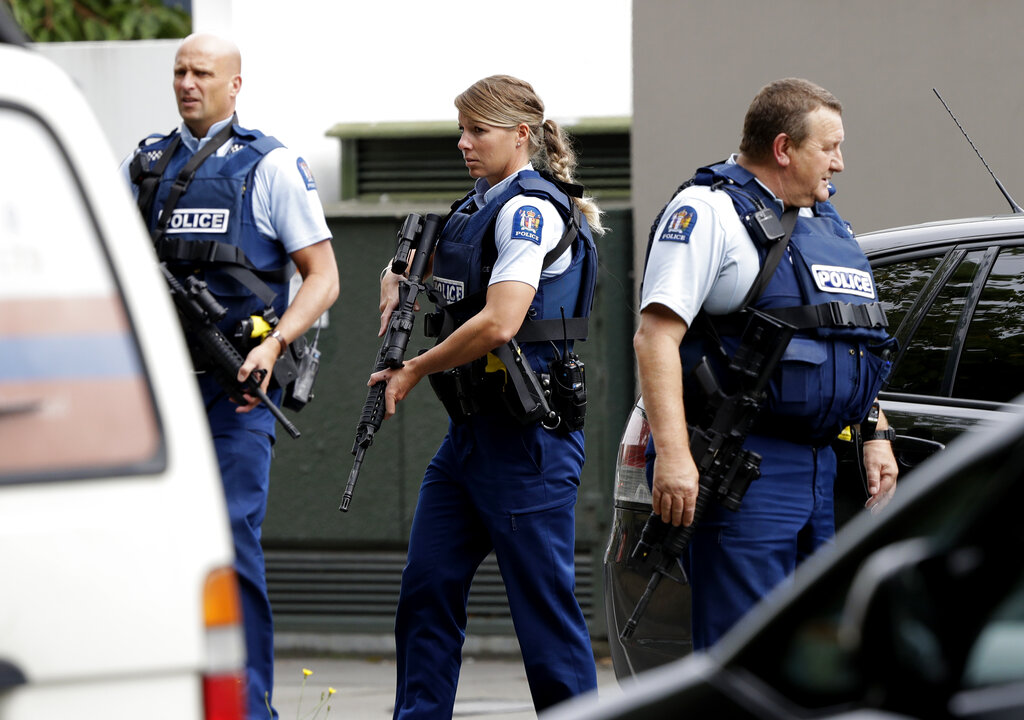 A gunman opened fire on two mosques in central Christchurch, New Zealand, on Friday, killing multiple people in an afternoon slaughter that in part was broadcast live online after the publication of a white supremacist manifesto.

The police said a “significant” number of people were killed, shaking a country with little history of mass shooting in what the prime minister called “an extraordinary and unprecedented act of violence.”

Some of the shootings in the city of Christchurch were streamed on Facebook, a grim development in terrorism that raised questions about the ability of tech companies to block violent content.

The police said three men and one woman were in custody, but they were unsure if there were others involved. The country’s police commissioner, Mike Bush, said that a number of explosive devices were found in vehicles stopped by police.

He warned residents of central Christchurch to stay indoors, and the police asked mosques to close.

“This is and will be one of New Zealand’s darkest days,” New Zealand’s prime minister, Jacinda Ardern, said at a news conference.

Bush said a mosque near Hagley Park, in the center of the city, and a mosque on Linwood Avenue, also in Christchurch, were attacked.

Shortly before the shooting, someone appearing to be the gunman publicly posted links to a manifesto on Twitter and 8chan, an online forum. The 8chan post included a link to what appeared to be the gunman’s Facebook page, where he said he would soon broadcast live video of the attack.

The 17-minute video, which appeared to be recorded on a helmet camera, shows his drive to a mosque, followed by a harrowing nearly two minutes of his firing on the worshippers inside, before fleeing the building and running back to his car and swapping weapons.

He then re-enters the mosque and again begins shooting, continuing to methodically move through the mosque. Several victims can be seen in the footage, many lying on top of one another motionless in a corner of the room.

After another few minutes, he leaves again, gets in his vehicle and drives away, talking to himself throughout.

“There wasn’t even time to aim; there was so many targets,” he says at one point.

The New Zealand police said on Twitter they were “aware there is extremely distressing footage relating to the incident in Christchurch circulating online” and urged people not to share the link. “We are working to have any footage removed,” the police said.

The video and Twitter posts showed weapons covered in the names of past military generals and men who have recently carried out mass shootings.

In his manifesto, he identified himself as a 28-year-old man born in Australia. He listed his white nationalist heroes, described what he said motivated him to attack and said he purposely used guns to stir discord in the United States around the Second Amendment.

The website Stuff reported that the police had cleared Cathedral Square, about halfway between the two mosques, where people had gathered at a rally to fight climate change.

While the details of the shooting were still unclear, one purported witness, Mohammad Isam, a Bangladeshi journalist, posted a video of members of Bangladesh’s national cricket team who he said escaped the attack.

The video showed several men in the team’s jersey walking briskly through a park with the message, “Bangladesh team escaped from a mosque near Hagley Park where there were active shooters. They ran back through Hagley Park back to the Oval,” referring to the nearby cricket ground.

Ardern cancelled her events for the rest of the day after the shooting.

The shooting happened a day after the country’s minister for climate change, James Shaw, 45, told police that he was grabbed and hit on the street in the country’s capital, Wellington.

Reports of the shooting happened as young protesters were gathering in Christchurch and cities around the world to demand action on climate change.

Christchurch, with about 388,000 residents, is the biggest city on New Zealand’s South Island, hugging the Pacific Ocean coast.

There hasn’t been a mass shooting in New Zealand since 1990, when a man killed 13 people, including two 6-year-olds, after a dispute with his neighbour in the seaside town of Aramoana.

Gun owners must be licensed, a process that includes a review of criminal activity and mental health, attendance at a safety program, an explanation of how the gun would be used, a residence visit to ensure secure storage, and testimonials from relatives and friends.

Homicides are rare in New Zealand, and gun deaths even rarer. There were 35 homicides countrywide in 2017. Since 2007, gun homicides have been in the single digits each year except 2009, when there were 11.

But there are plenty of guns. There were 1.2 million registered firearms in a country of 4.6 million people in 2017, according to the Small Arms Survey, a Swiss nonprofit.